Christian vs. Secular Schools: Which is Best for My Child? 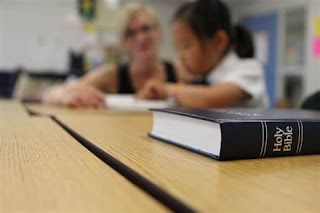 Parents are confronted with some very difficult decisions today with regard to the education of their children. Schools are teaching children what are very clearly anti-Christian “moral” principles and other ideologies that militate against the Faith. This leads to some serious issues.

The purpose of education is to prepare young people for the everyday work world. It should equip students with the necessary skills in math, science, English, literature, etc. to adequately engage the world they live in and make a living without too much difficulty in comprehending their duties and dignities. Unfortunately, that is not what schools are doing today. Instead, it is engaging in political agendas from preschool through college, churning out young people who now hate their parents, hate their nation, hate their culture, and even hate themselves. They eschew the very freedoms that afford them the right to be vocal about their hate even. Cultural Marxism has infected schools such that it presents a real danger to the proper formation of children forced to attend public institutions of learning. Anything and everything reflecting biblical values, morals, and ethics are attacked viciously, and the only way to deal with them affirmatively, so the student is indoctrinated to believe, is to dismantle and destroy everything associated with these things. This includes any culture, society, economy, or government built by Europeans who were informed largely by the Christian worldview. The end result of this propaganda fed to our children is a generation that will happily sell themselves into slavery to a global superstate, in which they and their children will be reduced to mere production-consumption drones; entire generations of economic units, not people any longer, with no recognized inherent value other than to serve this global superstate and its ruling oligarchy.

As you have undoubtedly already noticed, any dissent from this plan, this “great reset,” results in being labeled as racist, homophobic, transphobic, even a neo-Nazi — intolerant and a terrorist threat. This also means you are “canceled” by those who seek to ruin your life by having you fired from your job, your home taken away, your family threatened, and worse. Children, through this political education, are being programmed to view even their own family as the embodiment of "other." We have seen the violence inherent in this worldview as Antifa and other radical college students have rampaged through many of the major cities in our nation, burning down businesses, looting stores, threatening people in their homes, and even downright murdering people in the streets whom they deem to be "far right", whether they actually are or not. As one of these crazed young people said in a CNN interview, “There will be casualties on both sides. There will be because people will have to die to make a change in this world.”

The National Endowment for the Humanities reported the following:

Instead, students are given courses on critical race theory, equity, socialism, revisionist history (from a decidedly communist viewpoint), gender studies, transgender studies, and other courses designed with no other purpose in mind than to form young minds according to an anti-Christian worldview.
Healthy Education
One of the fundamental errors of American political thought is the notion that the church and state can never connect but should always be separate. In the arena of education, Americans generally think schools are only for the training of the mind and not for the promotion of faith. They will cite the tired adage, “separation of Church and State,” which is not found in any of our founding documents. The fact of the matter is the church has contributed to the education of both children and adults far longer than the State has been in the business. In the orthodox Christian sense, a school is an extension of the Church, since the school is charged with the healthy and proper formation of children into informed adults capable of intelligent decision making. It is even more imperative given the facts we have already discussed above regarding public educational institutions that Christian education is absolutely essential to counteract the poison of the immoral, hateful and disordered propaganda of public education. It is important that, as the intellectual capacity of young people is beginning to unfold and realized, we join the moral formation found only in the Christian faith to their intellectual formation. In Christian schools or homeschooling, this means that children are under the supervision of teachers and parents who have their highest good in mind, and who reinforce traditional biblical ethics, without which they would be hard-pressed to navigate an increasingly immoral and belligerent pagan world. Simply forming the intellect is not sufficient to achieve this goal. And while those who are in control of the public school system insist that intellectual formation is all that is needed, the young people being churned out of these schools is proof enough that their contention is wrong, and that they themselves are lying, as they are force-feeding their own ideology to students. Education is, and always has been, integral to character formation. In the Christian worldview, character is evidenced by the possession of well-ordered motives and upright standards of action and speech. Our character must be conformed to the character of Christ. This is the very foundation of morality. As such, no public school can claim to form upright character, since they have no moral foundation, and indeed teach principles that are completely opposed to morality, and thus good character. By removing God from schools, the very foundation for morality and ethics was removed, and every act that should be informed by the divine moral law becomes a subjective choice. Whatever feels right becomes the new law. Rather than teachers being an impediment to character building, as they are in public schools, teachers in Christian education work hand-in-hand with parents to encourage good habits, to recognize bad choices, and to avoid making them.
Why Does This Matter?
Every day of Christian education is filled with opportunities to reinforce biblical precepts through reading, writing, math, physical education, sports, and all of the other courses students take in the course of their intellectual formation. In other words, the life of the student is substantially informed by the principles of the Lord's gospel from preschool to college. As you no doubt know, this philosophy of education is attacked in the most aggressive ways by the statists who want to be the sole guiding principle in your child's life. This is to be expected as the Adversary roams our world seeking those he can destroy and devour (1 Peter 5:8), and what better targets to begin with than the innocent and helpless? I strongly urge Christian parents who may have children in public schools to remove them as soon as possible, as their spiritual lives are at peril. Either consider enrolling them in a Christian school in your area or begin homeschooling them in a Christian program such as ABEKA. I understand that this might present some difficulties and may require one parent to stop working and stay home, but with such high stakes involved as your children, I am certain you would agree that the sacrifice is absolutely worth it.
Labels: ABEKA Christian education Christianity homeschooling public schools secular education