Why Should Christians Confront Lies & Corruption? 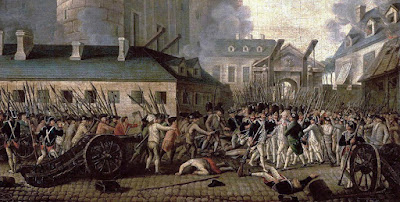 Christians are increasingly finding themselves at odds with the anti-culture around them, and in some cases, this has caused legal problems for the Christian involved. Christians are being forced to participate in sinful lifestyles by aiding or celebrating them and are punished for speaking the truth about these sinful lifestyles in spaces where they must work and carry out their daily activities. Just as in the case of such evils as human trafficking, slavery, etc., Christians should not remain silent, nor capitulate to the prevailing anti-culture. The situation only seems to be getting worse, with those encroaching on religious freedom. While we shouldn't look for opportunities to engage in conflicts, we shouldn't be fearful to enter the fray when truth is at stake.

In all cases of conflict, that is, when two authorities demand contradictory obligations for members owing allegiance to both powers, Christians will find themselves in a difficult situation. On the one hand, we are bound by the dictates of Sacred Scripture to obey our governmental authorities. On the other hand, those authorities are legislating immorality into the law of the land, which Christians cannot give any ascent to. In all such conflicts where secular authorities and Sacred Scripture find themselves in conflict, the authority of Sacred Scripture must prevail over that of the State. Moral issues such as abortion, the definition of marriage, the immigration of the poor and undocumented and school curricula advancing immorality and/or values at odds with both Natural Law and the Christian worldview are just a few of the issues we must speak out on and be a witness to in civil society (Matthew 5:14-16). Anything that is held to be important to a life of righteousness is the duty of every single Christian to defend in civil society since all of those things are essential to the salvation of souls, our relationship with the Lord Jesus Christ, and a healthy ordered society. It is the responsibility of the church to use its spiritual authority to inform the State as to what is morally upright and what is morally evil and reprehensible. Now, this does not mean that any Christian is permitted to use violence or threats of violence to achieve this goal, but rather that we are to be salt & light to the world we live in. Violence is not the guiding behavior of Christians (though we are by no means pacifists). Christians must, whenever possible, act within the laws of the land to achieve change. The goal is to come to a common agreement on such issues (Romans 13:1-2). Our first principle in speaking out against evil, whether from individuals or the government, is that we stand immovably on those principles which are essential to allowing us to meet our created end and remain faithful to our Savior. This means we cannot adopt the approach of the Liberal, for whom truth is a wholly subjective concept, but must recognize that lies, deception, etc. do not share, nor deserve the same respect or dignity as truth. There can be no respecting opinions or ideas that advance evil. As the philosopher Nicolas Gomez Davila put it, "The cultured man has the obligation to be intolerant."

I don't want to leave you with the impression that the State and the Church need be in conflict. While it has often occurred that this has been the case, the Church harbors no animosity toward the State as a temporal power. As I said, they should work together to ensure a healthy organic & orderly society. In fact, Christians should do all in their power to defend their nation when that nation is meeting it's proper end. We do this best when we educate our youth (and adults in our modern society) as to the divine origin of human governance, the proper role of government and the importance of obedience to laws, as well as by praying for our nations, elected officials, and doing our best to meet our own obligations to civil society. However, should we abdicate this role, which the Church has done, then we can blame only ourselves for the subsequent lack of moral sensibility our governments exhibit. Civil disobedience is a last resort and is acted upon when the State seeks to impose a law or mandate that demands we violate Sacred Scripture. At that point, your duty to your country requires you to speak out and act in peaceful civil disobedience and your duty to God requires you to do so with firm conviction that the divine revelation of God to man is the ultimate law bonding our conscience. The emphasis is on peace (Romans 13), even as we rebel. Revolution is not in the Christian dictionary, nor is it an act of faith. Our civil disobedience is also not a result of hatred for our nation, but simply a response to the governing authorities enacting legislation or mandates that are so grossly in error that they force us to choose between Christ and the State. Part of every Christian's calling, though we face increasingly hostile governments, is to speak boldly, be intolerant of the lies and schemes of our Adversary and never capitulate or compromise with the father of lies.