The Mystery of Time & Human History 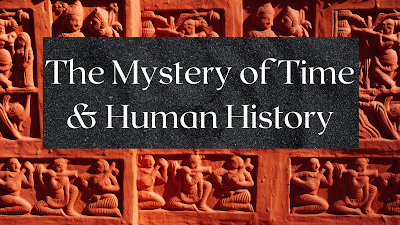 Human history, for all of our modern record keeping and scholarship, holds a multitude of mysteries. Beyond a certain point in our shared ancient past, we know little to nothing. We dig at ancient sites, pulling bones and pieces of our past out of the earth, and sometimes discover large settlements. Examining these fragments of human history, we attempt to form a picture of the past. One of the things that appears to emerge from everything we can discover is that civilizations repeatedly rise and fall. It seems that time has some sort of effect on human cultural development, progress and eventual demise. I want to examine briefly what I think is a fairly logical approach to time & the progression of human history and how it fits the Biblical worldview. This isn't intended to be comprehensive & I make no claims to having formed a definitive view of the topic. This is more an exercise in thinking out loud than offering a thorough treatment of a massive subject. With that in mind, let's take a look at the cyclical view of human history.

Cycles of rise and fall are witnessed to in many of the world's religions. For example, in Hinduism, time is considered to be an external energy of God and is viewed as being cyclical. Vedic philosophy postulates four cycles; Satya Yuga, Treta Yuga, Dwapar Yuga and Kali Yuga. Together these cycles as the process of time are called 'kalachakra'.

We can point to many ancient civilizations to substantiate this basic view of human history as cyclical. Pharaonic Egypt, Ancient Mesopotamia, Pre-Communist China, Vedic India, Pre-Columbian America, and most recently Western European cultures, which are currently experiencing what is likely their last gasps of life.  Every major culture/nation first emerges from pre-cultural primitivism and enters a phase of genuine cultural growth, during which it gradually transforms into a ‘civilization’, before finally petrifying and declining into a post-historic state of stagnation and sterility. All of the differences or nuances between spiritual, political and artistic life all vanish, and everything developed becomes a mere symbol or symptom of the same underlying and implacable historical dynamism, leading from a simple age of humble, yet orderly, healthy and spiritually vibrant beginnings through to an early critical and urban state, to a stage wherein they experience the height of creativity and "enlightenment", only to gradually decline into a megalopolitan, materialistic, technological and imperialistic anti-culture, whose dwindling creative forces can only lead to the establishment of a decadent Totalitarian State where life itself is considered cheap, people groups, family, and truth are meaningless, and the goal of mono-culture is enforced by any means necessary to keep the oligarchy in power, before it crumbles either from within or from stronger outside enemies. And then the cycle begins again. History certainly substantiates this view.

However, Christian theologians have tended to lean toward the linear view of time & history. In this view, events in time are a series of dominoes that when the first is pushed, create a linear series of events that cause the others to fall. If we look at historical events, we can certainly see this as well. Just in your own life you can find examples of this. You wake up in the morning and have many decisions before you. You can get up and go to work as usual, or you can simply not get up at all and skip work. If you go to work, your day likely progresses as usual. However, if you don't get up at all, then the subsequent events begin to fall as acted upon by your first decision. That decision not to get up causes a chain of events. This is linear time. As author Tom Montalk put it, "True time moves forward not with the tick of a clock but with the making of a choice. Until a choice is taken, the future is not determined."

So how do we reconcile the two? I think it is much simpler than perhaps it seems. Human history is indeed linear, in the sense that we are moving forward through space and time to some point, some ultimate destination. Christians understand this ultimate destination as the Kingdom of God. This seems to indicate that the linear progression of time is the energy of the will of God acting on human history. Within this linear progression human history repeats itself in cycles of rise and fall, birth, growth, old age, disease and death, just like all other things in the material world. It is a biological and historical reality. Thus, our civilizations, being partly the extension of our biological existence, also experience these stages of life. Think of it like a ball rolling through a tube. The ball is human civilization (cyclical), while the tube (linear) is time taking the ball to a destination at its end. The rise and fall are, in my opinion, the result of fallen man attempting, albeit futilely, to create the Kingdom of God on his own terms.

"You are caught in the current of unceasing change. Your life is a ripple in it. Every moment of your conscious life links the infinite past with the infinite future. Take part in both and your life will not be empty."-Oswald Spengler