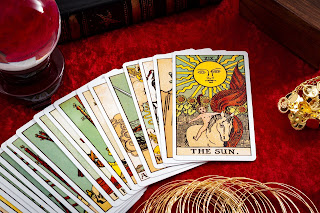 Tarot cards are readily available at many retail outlets and all over the internet. Some people buy them out of a sense of curiosity, while others are deeply involved in various occult systems and utilize them to gain insights into their lives and even their futures. So, what should you know about tarot cards? Are tarot cards evil? Should Christians use them?

What are Tarot Cards?

Tarot cards are really a deck of playing cards used to play various games, dating back to 15th century Europe. The rules of the games played were recorded by Marziano da Tortona, sometime before 1425.

The first tarot deck that we know for certain was designed specifically for occult purposes was created in 1789. These occult decks consist of 78 cards divided into two “arcana.” These and the cards specific to them are:

One of the more popular tarot decks was created by Aleister Crowley and is known as the Thoth deck, drawing on Egyptian symbolism.

The main use of tarot cards is for divination purposes. New Age conferences and even local town festivals frequently feature a tarot card reader who, for a modest fee, will give you insight into your love life, finances, family problems, potential spouse, or any other questions you might have to ask.

Each tarot card reader has their own personal method for practicing this form of divination, from setting down a predetermined number of cards in a specific pattern, to an “intuitive” approach, wherein they simply pull cards randomly that either your “spirit guides” or “the cosmos” tell them to read for you.

If this all sounds a bit daft, that is because it truly is. However, behind the daftness and silly nature of trusting random playing cards to answer important life questions or to determine your decision-making, there is a dark reality.

Scripture is filled with admonitions and commandments forbidding all sorts of occult methodologies. What comes to mind when you think of the occult? Perhaps it is black-robed and hooded evil minions, chanting in some strange language, in an attempt to invoke Satan.

Or maybe you have a mental picture of a group of teens gathered around a Ouija board, hoping to make contact with a dead relative. Whatever comes to mind, it usually never occurs to us that occultism may indeed be right in our own neighborhood. And yet, in almost every major city in this country, you will absolutely find occult societies and groups.

The word “occult” is derived from the Latin occultus, which means to conceal, or hide, secret things. In the context of occult societies practicing Satanism, witchcraft, ritual magic, etc., when we use the word occult, we mean an attempt to gain knowledge of the spirit world, and/or power, by means of contact with the supposed spirits of the dead, pagan “deities,” and ancestors. That is, biblically speaking, through communication with unclean spirits —demons

The Book of Enoch, a non-canonical writing quoted in the New Testament, tells us the origin of much that we associate with occultism is found in those very same fallen angels themselves. We are told they taught humanity the use of charms, enchantments, mind-altering drugs, astrology, and various means of foretelling the future by the various elements of nature — a classical pagan practice.

The early church was very aware of the origin of occultism.

“The demons were the inventors of astrology, soothsaying, divination...oracles, necromancy, the arts of magic, and whatever evil practices men exercise in addition to those things” (Lactantius).

“Magic and sorcery derive their power from evil demons...” (Origen)

“My child do not be an observer of omens, for it leads the way to idolatry. Likewise, do not be an enchanter nor an astrologer” (Didache).

All of these we find forbidden in Scripture (Deuteronomy 18:10-12).

Sorcery here is to be understood as the use of mind-altering drugs. One cannot deny the pervasive problem of drug abuse in the West, and few have ever viewed it from the perspective of biblical data. Drug abuse is indeed a form of occult bondage. Divination refers to exactly what is done with tarot cards.

Also, the mention of witchcraft takes the various forms of Wicca, and the mention of mediums and those who consult the dead covers those who claim to be psychics, some of whom are even used by law enforcement agencies. Yes, occultism is in every neighborhood.

Beyond this, it is likely that you will find Wiccan groups, neo-pagan groups, spirit channelers, New Age “meditation” groups, Edgar Cayce study groups, and maybe even outright Satanists operating in your neighborhood.

I encourage you, as a Christian, to do some research and discover whatever you can regarding the groups in your area and begin to pray for them. If possible, when they have public events, attend those events, and share the gospel in a firm, informed, and loving way.

While the occult is truly sinister and evil, those attracted to occultism are people just like you and me. They are average people who are seeking something to give them answers and life meaning. They are not necessarily sinister people. We need to respond to occultism and occultists with wisdom and love (1 Peter 3:15).

If you know someone who is using tarot cards, the best approach is to first address the reality that a deck of cards cannot answer life and future questions. It has as much validity as putting a bunch of pre-written answers into a hat and drawing one out, expecting to be guided to the right answer.

If you would not do this with something as important as, for example, a major surgery (should you or should you not have it), then why would you do so with equally important life decisions, such as marriage, finances, and other life issues?

Second, address the spiritual dangers someone can potentially put themselves in by using tarot cards. All forms of divination, no matter how seemingly innocuous, can potentially open someone up to much deeper problems, such as direct demonic oppression, obsession, and possession.

What Is the Danger of Tarot Cards?

To put it lightly, using tarot cards is spiritually reckless. Avoid them at all costs!