Auras: Does Science Prove They're Real? 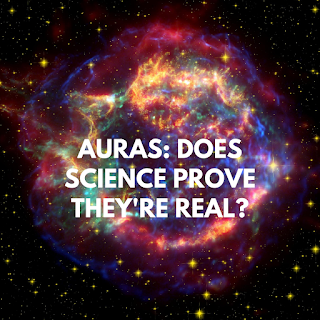 Many New Age thinkers and adherents accept the existence of auras-human energy fields surrounding the body, and connected to one's health and spiritual consciousness or advancement, while Christian apologists have rejected the concept completely. For example, an article on the 'Compelling Truth' website states:
"The belief in auras, which are supposed to help us identify feelings, experiences, health, or other qualities, is connected with psychics and is integral to the occult, New Age, Wicca, and witchcraft. Often, a clairvoyant or someone with supposed spiritual insight is needed to see or understand auras. Such practices are condemned in the Bible, as is spiritism and the use of mediums and psychics."1
While I certainly agree with the author's statements regarding the dangers and forbidden nature of the various occult systems and practices mentioned, I think there is also a simplistic approach here that fails to acknowledge the fact that, while all that Sacred Scripture contains is true, not all that is true is contained in Sacred Scripture. This could very well be the case with the existence of a human energy field, or aura. And the fact that the Adversary would exploit the potential existence of this energy field isn't solid theological grounds to reject it's existence out of hand. Of course, the potential existence of this human energy field also doesn't lend substance or support to the occult systems the author rightly condemned, as the existence of this energy field would be the creation of God, and would rightly point us to Him and His glory. Instead of taking a simplistic approach to this topic, I chose to examine what science can tell us, since if indeed a human energy field exists, it would be measurable by scientific technology. The following is what I discovered.
Dr. Christopher S. Baird, Assistant Professor of Physics at West Texas A&M University, writes the following:
"...humans give off radiation. Humans give off mostly infrared radiation, which is electromagnetic radiation with a frequency lower than visible light."2
This makes sense since God created us as beings composed of cells, which are in turn composed of atoms. Atoms are centralized areas of extreme density and a positive charge, which is the nucleus. This positive charge is surrounded by 'probability waves' that describe the wave function of the electron. In simple terms, the atom is a ball of charges. What makes us solid beings is an electric field. When two atoms come near each other, they impact each others electric field. Sometimes the atoms coexist, resisting being pulled away from each other. This is called atomic bonding. However, sometimes they repel each other, which means the two electron fields bounce off one another. This is why, when you're touched by someone else, they don't merge with your body. The fields repel each other. All of this happens because of the electric field of your body. In essence, your body is one big electric field. So obviously this electric field would produce an effect, such as Dr. Baird mentioned. The question remains, can we detect this energy field as light? The answer is, yes.
Masaki Kobayahsi, from the Department of Electronics and Intelligence Systems of the Tohoku Institute of Technology in Sendai, Japan, has indeed recorded visual evidence of the low levels of light emitted by the human energy field. His findings are that the light emitted by the body is 1,000 times lower than the sensitivity of the human eye. His report states:
"The human body literally glimmers. The intensity of the light emitted by the body is 1000 times lower than the sensitivity of our naked eyes. Ultraweak photon emission is known as the energy released as light through the changes in energy metabolism. We successfully imaged the diurnal change of this ultraweak photon emission with an improved highly sensitive imaging system using cryogenic charge-coupled device (CCD) camera. We found that the human body directly and rhythmically emits light. The diurnal changes in photon emission might be linked to changes in energy metabolism."3
Add to this the reality that the brain sends electrical signals throughout the body, including the heart, and you come to the understanding that the human body does indeed have an energy field, and that this energy field emits a very low level of light, which we could call an 'aura'.
Now, this doesn't support the claims of occultists in any way whatsoever. In fact, it does the opposite. The human energy field attests to the power of the Almighty God. As the Apostle Paul wrote:
"For his invisible attributes, namely, his eternal power and divine nature, have been clearly perceived, ever since the creation of the world, in the things that have been made. So they are without excuse."-Romans 1:20
The Logos (Christ), being the absolute source of divine order, is to be given the glory for creating us with such precision that our energy fields work perfectly, meeting their created end. Whether you call it an aura or just an electric field, the concept is not something Christians need to fear, but to properly address to the glory of God.
_____________________________________________________
1. https://www.compellingtruth.org/auras-Christian.html
2.https://wtamu.edu/~cbaird/sq/2013/07/17/do-humans-give-off-radiation/#:~:text=Yes%2C%20humans%20give%20off%20radiation,is%20not%20unique%20to%20humans.&text=The%20sun%20is%20hot%20enough,light%20and%20near%20infrared%20waves.
3.https://journals.plos.org/plosone/article?id=10.1371/journal.pone.0006256
Labels: Apologetics atoms auras Christianity electric field human body human energy field New Age physics science