You Can See Glimpses of God 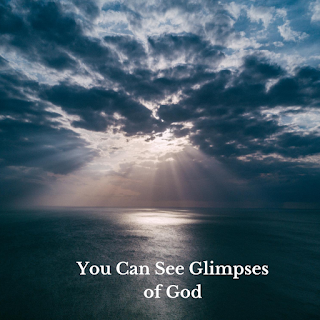 There are many misunderstandings of God in our world. Imperfect people who want to know God, but lack any guidance in spiritual life tend to create idols, strange ideas of who and what God is. God in His essence is the Supreme Absolute, the only Necessary Being, the Infinite, while we are simply very small, finite contingent creatures of His fashioning. All our speculative approaches to spiritual life are doomed to failure, as they are the guess work of the finite mind. Truthfully, God as He is, in His ousia (essence), cannot be comprehended by the finite mind. Instead we have to be taught by one who has gone before us, an elder in spiritual life, who can help us begin to recognize God in His energeia (energies) since these can be readily comprehended by the finite mind.

The closest humanity has ever come to the essence of God was in the person of Jesus Christ, who is the fullness of Godhead incarnated as a human. And as He has incarnated, we have no need for speculation and idols. But even with this gracious incarnation, his apostles, family, and friends only experienced him through His energies; physical existence, speech, touch, inspiration, miracles, etc. These are referred to by Justin Martyr as the Logos Spermatikos.

“He is the radiance of the glory of God and the exact imprint of His nature, and He upholds the universe by the word of His power.”-Hebrews 1:3

Jesus is the Logos, the Divine Order, the Sacred Word, the Way, Life itself, through whom all things were created and are sustained. As the Logos He revealed this truth about Himself to us:

In connection to the fact of Jesus as Creator, it is important to note the Apostle Paul's comment:

“For what can be known about God is plain to them, because God has shown it to them. For His invisible attributes, namely, His eternal power and divine nature, have been clearly perceived, ever since the creation of the world, in the things that have been made. So they are without excuse.”-Romans 1:19-20

God isn't hidden from us, as some false teachers suggest. He is manifest all around us in His energies. When we take the time to reflect on the order in the universe, the complexity of something as simple as a leaf, the aesthetically pleasing in nature, the beauty in another person, the scent of a garden in bloom, or the taste of a cold drink on a hot day, we find that God is there. The energies of God are order, aesthetics, beauty, complexity, simplicity, truth, justice, the input of the five senses, and so much more. Even the energy in your body that keeps you living and breathing, that keeps every atom together that forms your physical body, is His energy at work in you. These are His energies, and they're found throughout the entirety of creation as a witness of the Logos.

God is truly all around you! You don't have to look very hard to see.

You can catch a glimpse of God right now, but you have to see with the eyes of spirit, rather than the eyes of the flesh.
Labels: Christ energeia energies of God essence of God God Incarnation J. Davila-Ashcraft Logos ousia seeing God