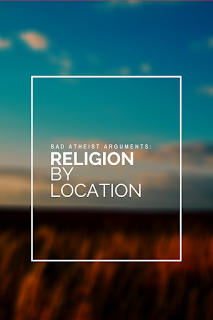 Argument: You only believe in that religion because of where you were born and raised.


Response: This argument is essentially a claim that your religion of choice wasn't really a choice, but imposed on you by culture, ethnicity, and location. While it was true in the past, before world travel, mass migration, and advanced communications, that people were likely to remain in the religion of their birth, that isn't the case any longer. In fact, it hasn't been the case since at least the late 19th and early 20th centuries. Men such as Swami Vivekananda (1893), Swami Rama Tirtha (taught in the U.S. in 1902), and Paramahansa Yogananda (1920) each brought their particular schools of Vedic religion to the West in the years noted. Yogananda in particular met with significant success in converting Westerners to Hinduism. *Currently, statistics show that 10% of American Hindus are converts to the religion.

This argument also ignores the reality that in the U.S., Christianity has significantly less influence than the atheist gives it. According to Pew Research, 19% of the adult population in the South, 22% in the Midwest, 25% of the Northeast, and 28% of the West, no longer claim affiliation with Christianity. In fact, in the West these non-Christians outnumber Catholics, Evangelicals, and every other religious group.

Slightly more than a quarter of men (27%) described themselves as religiously unaffiliated.

19% of women claim no religious affiliation.

Another example is India.

And the list goes on and on, with millions more Indians having converted to some form of Christianity.

The statistics demonstrate that, despite the atheists argument, people don't retain the religion of their home nation and ethnicity as they did in the past, and are indeed adopting foreign religions. It is likely that a significant number of those who report as not affiliated have a set of personal beliefs adopted from various religious influences.

Those who make the claim that location determines what we believe fail to recognize that Christianity is a foreign religion to the Western world, coming to the various pagan nations of antiquity from the Middle East. Those who adopted this religion certainly didn't do so because of where they were born, but because they were persuaded by the data they received. They used their faculties of reason to come to a determination as to whether this new foreign religion was true or not, and acted accordingly. The atheist argument presented seemingly denies the ability of people to examine, investigate, test, and reason things out when it comes to religion. Instead, this argument would imply that one's place of birth limits the ability to do so. The religion by location argument simply doesn't hold up to scrutiny.