Five Errors of the Perennial Philosophy 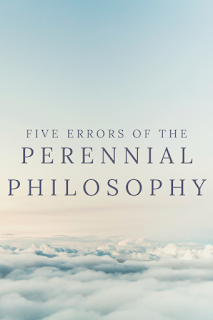 As someone who identifies as a Biblical Perennialist, and as a Theologian, I think it is important to address what I see as the grave errors in the raw Perennialist Philosophy, lacking in nuance, as advocated by such thinkers as Schuon, Coomaraswamy, Huxley, Guenon, and others. The following admittedly brief list encapsulates those errors.
While the Perennial Philosophy does point out shared truths that appear repeatedly over time in the history of human religion, without a proper foundation in epistemology, and an appreciation for the uniqueness of world religions, including the exclusive claims of Christianity, it is reduced to a philosophy of Relativism. It holds nothing as absolutely true except what is commonly shared, illogically assuming any truth claims to the contrary to be patently false, especially soteriological or epistemologically exclusive claims, such as those found in Christianity and Islam. Thus, the Perennialist Philosophy, without the guidance of the objective, absolute, and exclusive divine revelation found in its fullness in the Old and New Testaments, must be rejected by the orthodox Christian, since it is this Faith that is the fullness of truth.
Labels: Christian philosophy Christian theology Expedition Truth Radio J. Davila-Ashcraft Perennialism Refutation of Perennialism