Pantheism and the Reconciliation of Duality 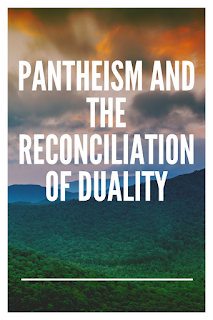 Theologians are careful to safeguard the "otherness" of God, His ontological position outside His creation, free and independent of any external forces. This is certainly laudable, as it is true that God is indeed "other-than" His creation. For example, we reject any suggestion that God is somehow part of the created world, which is a classical pagan idea we know as pantheism. It is expressed in our modern world most often in the expression "The universe is conscious." This is actually very much in line with the very definition of pantheism. (pan-all, theos-God) According to pantheism, things may seem to differ from one another in substance, but in reality there is only one substance, and all things are modes of being or manifestations of the one infinite and eternal substance. We human beings, with all that we think and do, are but a part of the grand panorama of changing phenomena that marks the evolution of Deity. The pantheistic deity is, then, not a personal God who is intelligent, distinct from the world and free in his acts. He can't be prayed to; he can't be adored; he is simply the universe, manifesting itself variously, now as simple matter, another time as animal life, and again as knowing and loving. He is not a sovereign being (if a being it can be called at all) and men are not subject to him. He is not the source of moral law. In fact, there is, strictly speaking, no moral law in the pantheistic worldview, as things happen as they must, and human freedom is an illusion. It is obvious that pantheism is really just another atheism: a pantheistic god is no god at all. The essential absurdity of pantheism should be evident to any one who realizes what is implied in its teachings.

It is easy enough to think of the universe as a unit and then give it a name—the "Be-All" or the "All-One", or whatever other name is preferred by New Age proponents this year —but if one gets no further than that in addressing the logical problems with the idea, then he is failing to honestly seek truth. It is easy to construct a system of pantheism and give it an air of scientific completeness; it is quite another thing to reconcile all the contradictions which the system involves. The pantheist doesn't simply read a unifying principle into the aggregate of things which are substantially different (we Christians do the same but from a very different position), but goes as far as asserting that all things constitute but one substance—one nature—which evolves itself, by some law of necessity, in various forms of being and in varying phenomena.

What meaning can the terms "substance" and "nature" really convey to the mind of a pantheist? Given a certain substance, whatever its nature is, can it evolve itself in contradictory qualities? Can it be wise and foolish, for instance, at the same time and in regard to the same objects in the moral order? And yet the pantheist combines all the wisdom and ignorance in the world in one being, whom (or which) he identifies with the universe. The same is true of all other categories of thought, feeling and action. No matter how incompatible two attributes may seem to be, they are found side by side in the accommodating nature of the universe. A pantheist might say, on observing any phenomenon of mind or matter, "That is the universe manifesting itself in that particular way." If he encountered someone who believed a very unsound philosophy, he would say, "There is the universe under the aspect of a philosopher." If the next moment he meets another person whose philosophy was a complete contradiction of the first person's, he would say with equal sincerity, "Ah, there is the universe again under the aspect of a philosopher." The pantheist is forced to unite all sorts of contradictions in his conception of the pantheistic deity. Morality and immorality, wisdom and folly, knowledge and ignorance, must be ascribed to this one all-embracing being. If all things are one, it is easy to imagine what strange antics the pantheistic deity must play. He is at once the lion and the lamb when the latter is devoured by the former. He kills himself and yet survives his killing when a thunderbolt strikes a man dead, for thunderbolt and victim are identified in the one being.

Pantheistic Errors
Experience, aided by reason, tells us that many things differ from one another substantially. Living beings, for instance, can't be confounded with non-living. One chemical element can't be identified with another. The individuals of a species differ, and among human beings one differs from another and lives, so to speak, in a social circle of his own. Has pantheism discovered a cryptic philosophy which reduces all things to one? The truth is that the pantheist is seized by the desire for reducing multiplicity to unity. He is not satisfied, or professes not to be satisfied, with the Christian conception of the origin of things —a conception at once simple and logical—according to which, before the universe was created, all things existed in the mind of God, not formally, that is to say, as they are when created, but eminently, or in a much higher manner, inasmuch as God had from eternity not only a conception of the universe in all its details, but also the power to bring it into existence. The pantheist professes not to be satisfied with the evidence for this genesis of the cosmos, and instead turns to a philosophy abounding in contradictions. Beyond these contradictions, pantheism also suffers from the following defects.

1. An Evolving Deity- Perhaps the crowning absurdity of pantheism is its conception of the way in which the pantheistic deity evolves itself and advances toward its perfection. First of all, the only determinate existence it has consists in the changing facts or phenomena of the universe. Prior to and apart from these phenomena, it is nothing determinate. And yet the entire evolution of things is produced by something inherent in its nature, to which, therefore, we must refer back all things as to their efficient cause. In other words, it is the cause of determinate existence and yet has no determinate existence of its own—which is a logical absurdity. The primal cause of things must have an existence of its own, and therefore a determinate mode of existence—otherwise it is nothing. Hence, the pantheist presents us with the idea of production out of nothing in a new form. He repudiates the idea of creation, which is the production of a thing out of nothing by the act of an omnipotent God, and then turns to contemplate nothing producing something without the aid of divine omnipotence! The objection against creation, urged by pantheists and atheists, that out of nothing nothing is made, may now be turned against this morass of contradictions which passes under the respectable name of pantheism.

2. No Moral Foundation- As for pantheism and morality, logically the pantheist can't speak of morality; for morality supposes a universal moral law which has its primal origin in a personal divine Lawgiver. Pantheism can furnish no such basis for morality. The pantheist may profess to recognize with the rest of men two opposite moral aspects in human actions, but why he should call the one good and the other bad he has no reason furnished by his system of philosophy. With him morality is essentially a matter of convention or of expediency, and thereby ceases to be morality.

Pantheism, nevertheless, seems to inspire a certain mystical response in occultists and spiritual seekers, which appeals to those who seek to reject the personal God of Sacred Scripture and His self revelation; but mysticism is one thing, and objective truth another. In seeking to reconcile duality, the pantheistic deity is not personal, creative, wise, self aware, omnipotent, or omniscient.

The God revealed in Sacred Scripture, however, is all of these things and more. Sacred Scripture reveals a God who is beyond duality, while still affirming the reality of duality. He is Spirit:

"God is spirit, and those who worship him must worship in spirit and truth."-John 4:24

And yet in His infinite love for humanity He has entered time and space, becoming one of us, a material being, fully human in the divine work of restoring us to a relationship with Himself.

"He is the image of the invisible God, the firstborn of all creation."-Colossians 1:15

"And the Word became flesh, and dwelt among us, and we saw his glory, glory as of the only Son from the Father, full of grace and truth."-John 1:14

There is a conflict, so to speak, between matter and spirit; between spirit and flesh. This dualistic conflict, caused by our inheriting the effects of the fall from our First Parents, is part of what now separates us from our Creator, and is a corruption of the created nature of humanity.

"I tell you this, brothers: flesh and blood cannot inherit the kingdom of God, nor does the perishable inherit the imperishable."-1 Corinthians 15:50

Thus one of the effects of the Incarnation and Resurrection of Jesus is the reconciliation of the duality of matter vs. spirit in His divine person. In Him we have the perfect meeting of humanity and divinity. He is fully God and fully human.

"For in him all the fullness of God was pleased to dwell, and through him to reconcile to himself all things, whether on earth or in heaven, making peace by the blood of his cross."
-Colossians 1:19, 20

Because of God's reconciliation of these dualities in Christ, we too will be as He is, and the matter/spirit duality will be reconciled in us.

"Beloved, we are God's children now, and what we will be has not yet appeared; but we know that when he appears we shall be like him, because we shall see him as he is."
-1 John 3:2

"His divine power has granted to us all things that pertain to life and godliness, through the knowledge of him who called us to his own glory and excellence, by which he has granted to us his precious and very great promises, so that through them you may become partakers of the divine nature, having escaped from the corruption that is in the world because of sinful desire."-2 Peter 1:3.4

Meanwhile, the pantheist finds his consolation in drifting with the ages and ending in — nothing!
Labels: Christian philosophy Christian theology dualism duality Incarnation J. Davila-Ashcraft matter vs. spirit pantheism Resurrection