The Quantum Field, the Fall, and Redemption 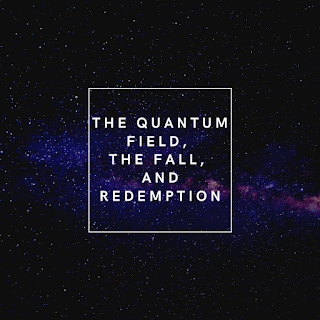 Quantum Field Theory, due to recent breakthroughs in quantum mechanics, has become a widely discussed topic in both science and philosophy. When all the data is compiled, the metaphysical implications are astounding, undermining the Materialist conception of the cosmos. Are we connected to our planet? To the cosmos? To each other? Before we get into the specifics we need to take a brief look at the research that leads to the fact of the Quantum Field and its metaphysical implications. The late Dr. John Wheeler (1911-2008), Physicist and Professor at Princeton University, proposed, based on scientific data alone, that we live in a "participatory universe", where everything is connected. Albert Einstein too expressed deep concern over data pointing to the potential that we live in a universe where we could actually influence matter in any particular place, while we're somewhere at a distance. He referred to this as the "Spooky Action at a Distance" phenomenon.1

If we are connected, then there must be "something" through which our emotions, desires, and will move in order to interconnect. The idea of a field of energy seems to have gained significant attention in scientific circles in the late 1800s, and was known as the "Aether Field", though that name has been long since rejected. From April to July of 1887, Dr. Albert Michelson and Dr. Edward Morley, at what today is Case Western Reserve University in Cleveland, Ohio, began experiments to detect the "Aether Wind".2 The basic idea being, if the Aether Field exists, then it should interfere with light waves due to an Aether wind- the motion of that field in action. The end result of the experiment was that they found nothing to indicate any such interference, and concluded that no such Aether Field existed. Science pretty much continued to disregard any suggestion of an energetic field connecting all things for many years to come. Then, in 1986, an experiment conducted under the auspices of the U.S. Air Force, using much more sophisticated equipment than Michelson and Morley possessed, found that there is indeed a field of energy connecting all things, and Michelson and Morley were actually very close to finding it. The results of this experiment were published in the peer reviewed Nature Research Journal of August 1986.3

Subsequently, the University of Geneva conducted an experiment under the direction of Dr. Nicholas Gisin, the results of which were released worldwide in July 1997. It was known as the Twin Photon Experiment.4 Photons are the light particles that all atoms are made of. They're the substance of the universe. This experiment sought out to discover how these photons are influenced by the Quantum Field. They split a single photon into two, creating twin photons. This meant that there was control in the experiment, since both photons had the exact same identical properties. They placed each in a device that propelled the photons into two different/opposite directions along two fiber optic cables, each measuring seven miles in length. This meant when the photons reached their target at the end of the cables, they were a total of 14 miles apart. They then manipulated one of the photons, "tickling" it, as they referred to it, and a very interesting thing happened. When they interacted with one photon, the other, even 14 miles away, reacted as though it was having the exact same experience of manipulation. For example, when they forced one photon to rotate in a given direction, the other photon would rotate in the same direction at the same moment in time. When they electrically charge or discharged a photon in one place, the exact same thing happened to the other photon. This connection is what is termed in scientific circles as "entanglement".

The metaphysical implications are important to understand. They strongly indicate that what happens in this field influences our world and our daily lives, and we in turn influence the field. This challenges the Materialist conception of all things as essentially separate.

We know that the Quantum Field exists, and we know that we're connected to it, so the next question is, what does the field do exactly? There are three things that emerge from what Quantum Theory tells us of the field.

1. The field appears to "contain" all that exists, and science can tell us nothing of what might exist outside the field itself. Everything that has ever happened, or that is happening, are contained in this field.

2. The field is a "bridge" between us, our world, and each other. When we offer prayers, the science says the field will carry that prayer somewhere. Furthermore, what occurs in this field impacts the entirety of humanity on some level. More importantly, the field appears to be a bridge between us and something/someone greater than us-a transcendent world and being outside space, time, and matter.

3. The field reflects back to us the world we create as a result of our thoughts and actions. If our world is one of suffering, pain, conflict, disease, and death, it is precisely because we are ontologically embodying those things.

Nearly every ancient culture, no matter the religion to which it adhered, held that all life was interconnected.This was a core premise of nearly every people group. Now, being pagans they misinterpreted what is in essence a perennial truth, and developed pantheistic notions based on it. But the fact that pagans knew this principle, and misunderstood/misapplied it shouldn't scare Christians away from accepting the truth of it, since it does find significant support in Sacred Scripture. Stay with me and you'll see.

God created man in His image and likeness. In our original state we didn't experience disease, decay, suffering, and death. The natural order (the cosmos) was perfect as well. The natural world produced fruit of its own accord, animals didn't kill each other, nor did they pose a threat to man. Both animals and humans ate plants for food (Genesis 1:29-30). The world in which Adam and Eve lived had perfect, temperature, perfect humidity, and nothing within creation could detract from their enjoyment of it. God declared the earth and the entire cosmos "very good". (Genesis 1:31) What is very good before the eyes of God can't have flaws. It was, in short, paradise.

However, when Adam made the willful choice to disobey God, all of that changed.


So, what does this have to do with the Quantum Field?

Since we know that our actions have an effect that ripples across the Quantum Field, and potentially impact human history on some minor level, this fact confirms the biblical account of Adam's actions having a universal impact.

The Apostle Paul touched on this when writing of Adam as the Federal Head of humanity.

"Therefore, just as sin came into the world through one man, and death through sin, and so death spread to all men..."-Romans 5:12

Quantum physics, then, confirms what Sacred Scripture teaches on the impact of one man's actions on the entirety of humanity and creation. Adam affected the Quantum Field to a greater extent than we do precisely because he was the Federal Head of humanity, and as such his actions carried eternal and transcendent implications.

Enter Christ into the picture and some fascinating possibilities emerge.

Could it be that the actions of Christ, in entering into human life and living it perfectly, then laying down his life to reverse the effects of sin, impacted that Quantum Field to a greater extent than Adam, literally reversing the impact "wave", so to speak, of Adam's disobedience? If I'm correct, Christ, as the "second Adam", and as the new Federal Head of humanity, had an impact so tremendous that, when we make the decision to reject the actions of sin, we, through Christ, also impact the Quantum Field and become "a new creation. The old has passed away; behold, the new has come." (2 Corinthians 5:17) In short, the twin photon effect occurs when we place ourselves in Christ, allowing ourselves to be transformed by His actions, becoming like Him. What God did in Christ 2,000 years ago, occurs in us even at 2,000 years of historical distance.

Notice that Paul doesn't just say God reconciled humanity, but the entire world-the totality of the created order. The redemption quite literally repairs the damage done in the Quantum Field, which ultimately will lead to a paradise restored-a new heaven and new earth. (Revelation 21:1)

The questions that arise from Quantum Theory are indeed fascinating, and if viewed carefully through the filter of Sacred Scripture could unlock some amazing mysteries of creation and life to us.