The Argument from Conscience 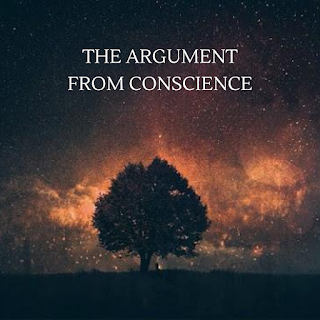 Since man is possessed of intelligence, he recognizes that certain actions conform to his rational nature and that others don't. He sees, for example, that gluttony, cruelty, lust, and the infringement of the rights of others, are contrary to the order of reason: that when he allows the lower part of his nature (inherited depravity), his passions, to dominate him, or if he disregards the law of justice which compels him give to each his due, he is doing violence to that element in him which makes him a rational man. In other words, these actions are evil, and, the opposite characteristics-temperance, kindness, continence, and justice-are good. This distinction between good and evil has regard purely to our nature as moral agents. It is entirely irrespective of any question as to whether the act results in a balance of pleasure or of pain. Those acts are good which befit us as rational beings: those are evil which are repugnant to our nature in this respect. The supreme rule of conduct is to do what is morally good and avoid all that is morally evil. The ethical standard thus imposed is clear enough with regard to its broad outline. Everyone instinctively comprehends for the general direction of life which acts conform to reason and which don't.

The primary precepts of the moral law don't allow for mistakes in their general principles. Of course, on points of detail there will be numerous differences of opinion. Problems of this kind are bound to arise, since it often isn't an easy matter to judge the application of a general principle to a particular case. Most of us agree that obedience to lawful authority is ethically right. But the precise limits within which obedience is due can be difficult. For example, the obedience due the state when it conflicts with the demands of the Gospel may be an extremely delicate point to settle. Sometimes what was once a right action ceases to be so owing to a change of circumstances. Thus it is that what was universally recognized as a duty is at a later date viewed as a breach of the moral law. For example, if a criminal (say a thief) hides in our home, and the police come knocking, asking if he is hiding there, we have a moral obligation to expose his hiding place. But in the case of Jews hiding from Nazi authorities, our moral obligation changes.

Occasionally the force of custom is so strong that the prevailing culture forms an erroneous judgment on some matter which to the unprejudiced mind is plain enough. The woman who has an abortion may do so without realizing that the act is evil due to the prevailing culture of Post-Modern feminism. However, difficulties and discrepancies such as these don't alter the fact that everyone without exception can distinguish between moral good and moral evil. If someone was incapable of distinguishing these, he would be considered mentally deficient, since he would be destitute of that light of reason that sets man apart from the animals. It is a fact that we naturally feel the moral law to be obligatory as an internal reality. We recognize it as a force which binds us. Its prescriptions aren't a mere norm for the realization of life at its best in any given culture. They come as authoritative internal commands; and to ignore those commands is to fail in a duty which we owe. If we do ignore them, we are conscious of the fact that justice pronounces us deserving of punishment.

Necessity is a primary characteristic of the moral law. The meaning of 'necessary' should be understood. The necessary is that which must be. We sometimes speak of physical laws as necessary. Yet it can be questioned whether we're justified in using the term in their regard. The mind doesn't recognize any reason in the nature of things why an antecedent must be followed by a consequent. Experience shows us that the fact is so, not that it must be so. On the other hand, mathematical relations are necessary. Two plus two must equal four. But the necessity we're concerned with isn't mathematical, it is moral. It signifies that our will is bound by an obligation which isn't conditional but absolute; that we have no choice in the matter; that no alternative course is open, which we're free to adopt if we will. It declares that we're face to face, not with a suggestion, but with a command. This sense of moral obligation can't be resolved into a perception of expediency, even though many Materialists have tried to explain it away as such. Post-Modernism tells us that the sole basis of morality is expediency, and that the moral law is simply the generalized result of what experience has shown to be conducive to public utility. Goodness, morality, and ethics aren't absolute, but relative. They're determined by the needs of the people and culture, and no action can be affirmed as essentially and unalterably evil or good. Such an explanation of the moral law is obviously fallacious, since it completely fails to account for that binding internal force which is its essential characteristic. Obligation and expediency aren't at all the same; the one cannot be reduced to the other. That an act will in the long run contributes to the material welfare of the community is certainly a reasonable motive of action. It isn't, and never can be, an obligation—an absolute imperative with the power to bind my will. Expediency doesn't account for the internal sense that we “should” or “ought” to pursue a moral action. The conviction expressed when we acknowledge that we ought to do something, could never spring from a purely subjective source. It can't impose that sense of obligation, since it doesn't even stand on a principle of obligation.

Moral law implies a lawgiver. We can't have a command without a superior who issues the command. It is true that Kant declared reason to be autonomous, and maintained that its precepts must be self-imposed. He contended that unless they were regarded in this light, they lacked the essential quality of moral laws, and that to treat them as commands coming from an external source was to deprive them of their moral character. But, though many Materialists have adopted his views on this point unquestioningly, the position is altogether untenable. There can be no obligation where there aren't two persons concerned— a superior having authority and a subject who owes obedience to his commands. No man can impose a law upon himself. Law binds the will; and as long as no superior authority commands us, we remain at liberty to choose any course of action we like. I can't owe a debt to myself. If the moral law binds us, as we know that it does, this can only be because it comes to us from someone who can claim the duty of obedience from us. An essential point of morality is lacking unless we recognize that the internal command is imposed by an external authority, and yield obedience to it as such. This is not to say that the moral law is arbitrary. We've seen that it isn't- that it is revealed to us by reason as the rule of life involved in our rational nature. It is natural law. But only if an external authority who commands me to observe the natural order, does it acquire the character of law. If, then, we ask who it is who commands us internally, there can be only one answer. The moral law, as we have seen, has the character of necessity. The authority who imposes it must then be final. Only when a command issues from the supreme and ultimate authority is it in any strict sense necessary. The lawgiver who commands me is, then, the source and fountain of morality, the supreme arbiter of right and wrong. The only being who possesses these attributes is God.

There is a principle of reflection or conscience in every man, which distinguishes between the internal principle of his heart, and his external actions; which passes judgment upon himself and them; pronounces some actions to be in themselves just, right, and good, and others to be in themselves evil, wrong, and unjust; which without being consulted, without being advised with, magisterially exerts itself, and approves or condemns us accordingly. It is sometimes argued that it is impossible to feel the sense of obligation before we're aware of a lawgiver, and that no man can recognize that he owes the duty of obedience, unless he already knows for certain that someone makes this claim upon him. They conclude that our evidence for the existence of God is fallacious as a result. This argument amounts to no more than a contention that it isn't easy to see how the sense of obligation can arise, and that it is wholly a priori. On the other hand, we can appeal to our own experience to demonstrate that, in point of fact, the sense of obligation arises spontaneously in the mind (which we've discussed) so as to demonstrate a logical basis for the existence of a lawgiver. When faced with the alternatives of right and wrong, we're immediately aware that we ought to choose the right. This consciousness of duty owed is attested to unmistakably by the character of the feelings that are consequent to our actions. A breach of the moral law arouses in us certain affections of the mind such as shame, self-reproach, and remorse. All of which necessarily involve the presence of obligation. The existence of a law, rooted in the very nature of man, immutable, universal in its obligation, and independent of all human authority is quite real. No earthly ruler has the power to change or override what this law prescribes, because it is divine in origin, and is imposed upon us by God Himself. The Church Father, Lactantius, has preserved for us a passage from Cicero's lost work, De Republica, which is worth citing.

“There is a true law, right reason, consonant to nature, coextensive with the race of man, unchanging and eternal. ... It is not allowed us to make any alteration in that law: we may not take away any least portion of it: nor can we repeal it as a whole. Neither senate nor people have power to release us from our obligation in its regard. We need not search for some one to explain or interpret it. We shall not find one law at Rome, another at Athens: one now, another hereafter; but that law, one, everlasting and immutable, is binding on all races and at all times : and there is one common Master and Lord of all, God. He it is who drew up this law, determined its provisions, and promulgated it.”-Johannes Quasten, Patrology, Vol. 2, Thomas More (1986)