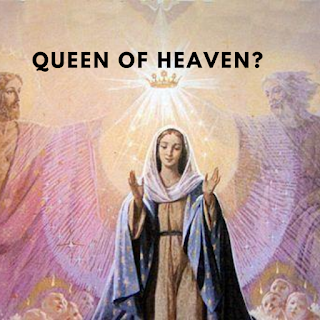 Roman Catholics are quite familiar with the concept of a "spiritual mother" and "queen of heaven", designating Mary, the mother of our Savior, as such. Catholic prayers are literally filled with references to "our blessed mother", imploring her to intercede for her spiritual children. The Second Vatican Council even refers to her as a "mother to us in the order of grace." In John Paul II's prayer consecrating the world to Mary on  March 25, 1984, he refers to Mary as "Mother of individuals and peoples." Is there any room for a spiritual mother in the Christian faith? If so, who or what is it? The Church Fathers did indeed teach the reality of a spiritual mother, but it was not Mary. Instead, this symbolic "mother" was seen as the church itself. The following are just a few of the many quotes available demonstrating this fact.

"The mother draws the children to herself, and we seek our mother, the church."
- Clement of Alexandria

"The virgin mother is one; I love to call her the church....She is both virgin and mother. That is she is as pure as a virgin, but as loving as a mother. Calling her children to her, she nurses them with holy milk." - Clement of Alexandria

"..our lady mother, the church.."- Tertullian

"Do not depart far from your mother (the church), and the highest will be able to be merciful to you...I exhort the adults that they should be born again and run in arms, as it were, to their mother from the womb."- Commodianus

"I gladly rejoice and am thankful, most brave and blessed brethren, at hearing of your faith and virtue, by which the church, our mother, glorifies."- Cyprian

"...we  begin to be gathered together once more into the bosom of the church, our mother."- Cyprian

"I wish I could persuade them, for the sake of our mutual affection, to return to their mother- that is, to the catholic church."- Cyprian

"This is the desire and purpose of all heretics, to frame as many attacks of this kind as possible against our most holy mother, the church."- Treatise on Re-Baptism

Catholics will claim their idolatrous veneration of Mary is likewise founded in the writings of the Church Fathers. But is it really? Let's see.

Her Obedience
We do find Mary is esteemed because of her obedience and faithfulness, thereby cooperating with  the will of God to reverse the effects of Eve's disobedience. Mary is seen as an example of Christian womanhood in her submission to the will of God even under the most difficult of circumstances, and in the fact that she was declared by the angel to be "full of grace" and therefore potentially in a state of sanctification.

"He (Jesus) became man by the virgin, in order that the disobedience which began with the serpent might receive its destruction in the same manner in which it derived its origin. For Eve, who was a virgin and undefiled, having conceived the word of the serpent, brought forth disobedience and death. But the virgin Mary received faith and joy when the angel Gabriel announced the good tidings to her that the Spirit of the Lord would come upon her."- Justin Martyr

Her Virginity and Children
Mary was not considered to be a perpetual virgin. There is a heretical association between the concepts of Mary as a perpetual virgin and her being without sin in Roman Catholicism. When Catholics promote the concept that Mary was a perpetual virgin they're subtly betraying an underlying Gnostic theology of sex, which labels the procreative act as either intrinsically sinful or incompatible with holiness of life. This concept must be rigidly opposed, because God, the author of sexual intimacy, designed humanity with this function, and pronounced it good. In other words, sexual union within marriage is itself a positive thing, only its misuse is gravely sinful.

It is also a very clear Biblical fact that Mary had other children.

And again, the Church Fathers accept what Sacred Scripture says.

"There still survived some of the kindred of the Lord. There were the grandsons of Jude, who according to the flesh was called His brother." - Hegesippus

"Jude, who wrote the catholic epistle, was the brother of the sons of Joseph." - Clement of Alexandria

Mary as Theotokos
Early on in the history of the church (by the 4th century), we find the first mention of Mary as Theotokos- Greek for "God-bearer". The Biblical evidence and the consensus of the undivided church demonstrate that she is indeed the Theotokos- the "God Bearer". To suggest she isn't the Theotokos is to suggest there is a division in Christ's humanity and divinity, which is a grave heresy.

"The Spirit could not abide upon all men, but only on Him who was born of Mary, the God-bearer."
- Disputation of Archelaus and Manes

As we can see, the ancient Christians possessed a healthy respect for Mary. However, we find no hint of the dogma of Mary's "Immaculate Conception", nor of  the "Assumption". We find no evidence of prayers or devotionals in her honor, nor of titles such as the "Queen of Heaven", nor "Co-Redemptrix".


Inanna in Disguise
Where does this idea of a “queen of heaven” come from? The phrase “the queen of heaven” appears in the Bible twice, both times in the book of Jeremiah. The first incident is in connection with the things the Israelites were doing that provoked the Lord to anger. Entire families were involved in idolatry. The children gathered wood, and the men used it to build altars to worship false gods. The women were engaged in kneading dough and baking cakes of bread for the “Queen of Heaven” (Jeremiah 7:18). This title referred to Inanna in Sumerian paganism, as well as Ishtar, an Assyrian and Babylonian goddess also called Ashtoreth and Astarte by various other groups. She was thought to be the wife of the false god Baal, also known as Molech. The motivation of women to worship Inanna stemmed from her reputation as a fertility goddess (she was also associated with mindless violence, connecting her to the Hindu deity Kali), and, as the bearing of children was greatly desired among women of that era, worship of this “queen of heaven” was rampant among pagan civilizations. Sadly, it became popular among the Israelites as well.


We also find a reference to the "queen of heaven" in Jeremiah 44:17-25. Jeremiah was sharing the word of the Lord, and reminds the Israelites that their disobedience and idolatry has caused the Lord to be angry and to punish them. The prophet warns them that worse trouble awaits them if they do not repent. The Israelites, rather than heeding the prophet, make it clear that they have no intentions of giving up their worship of demonic spirits, promising to continue make drink offerings to the queen of heaven, Inanna, and even going so far as to credit her with the peace and prosperity they once enjoyed because of God’s grace and mercy.

Jesus Himself issued a mild rebuke to a woman who cried out to Him, "Blessed is the mother who gave you birth and nursed you" (Luke 11:27), replying to her, "Blessed rather are those who hear the word of God and obey it." By doing so, He implicitly ended any notion of veneration of Mary such that we see today in Roman Catholicism. The various visions and apparitions of this spirit, including at Guadalupe, Lourdes, Akita, Garabandal, and Fatima, are all demonic in nature and origin, and each, when examined carefully, demonstrates this beyond any question. Mary is not the queen of heaven, and as sincere as our Catholic friends are, they're worshiping the pagan deity Inanna unawares. While Mary is indeed blessed to be the mother of the Savior of humanity, and we can agree with theological precision and biblical orthodoxy that she was the "Theotokos", she would reject the veneration afforded her by well meaning, but erring Catholics.
Labels: Apologetics Blessed Mother Church Fathers Innana Ishtar J. Davila-Ashcraft Mary pagan goddess Patristics Queen of Heaven Theotokos veneration of Mary