Is the Concept of Enlightenment Biblical? 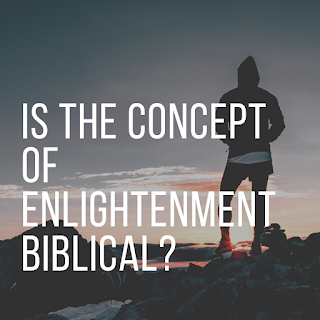 Many of the world's religions, as well as many religious cults, claim to offer a path to enlightenment. The word enlightenment is, in simple terms, defined as clarity of the intellect, insight, understanding or knowledge. In the sense that the word is used in a spiritual context, it refers to the clarity of intellect gained by self realization. This, of course, requires we define self realization, and this is where the biblical supernatural worldview differs greatly from the various worldviews of other religions. For example, the various Vedic schools of philosophy propose the basic realization that man is not the body, but is pure spirit-soul. In other words, they propose a very strict dualism, as they view the body and all matter as being an inferior energy in which the soul is trapped. The material world is something to escape from, including the body. It is much the same for other eastern religions, including Buddhism and Jainism. Buddhism proposes enlightenment as bodhi, an identical understanding or wisdom to that of Siddhartha Gautama. The root of the word is budh, meaning "awakening". Buddhist enlightenment is evidence by a cessation of cravings, and an undisturbed demeanor in the face of suffering. This Buddhism adopts from the Vedic philosophies from which it sprang.

It is rare to find the word enlightenment used in Christian literature. Instead we find the word illumination used by the early Church Fathers, essentially being the same as enlightenment. However, instead of being the cold indifference of the Buddhist, or the gnostic dualism of the Vedic philosophy, the concept of illumination in early Christian sources referred to the process by which God, through the work of the Holy Spirit, aides the human mind in understanding the truths of Sacred Scripture as an act of grace. Augustine wrote:

"The mind needs to be enlightened by light from outside itself, so that it can participate in truth, because it is not itself the nature of truth. You will light my lamp, Lord."

Augustine correctly states the process by which Christians attain a knowledge of spiritual truths. As opposed to the methods of the various eastern religions, which demand great personal effort through meditation systems, physical exercises, breathing techniques, dietary modification, severe austerities, detachment from loved ones, and submission to gurus and teachers who quite often abuse their positions and their disciples, Christians are to be led by God Himself, the Third Person of the Trinity. The process of illumination begins in conversion and baptism, since there can be no relationship with God without the forgiveness of sins. Clement of Alexandria connected the Christian concept of illumination to our justification and the spiritual transformation that occurs when God forgives all our sins and declares us holy through the merit of the blood of Christ.

"Jesus answered, "Most assuredly, I say to you, unless one is born of water and the Spirit, he cannot enter the kingdom of God."-John 3:5

"Then Peter said to them, "Repent, and let every one of you be baptized in the name of Jesus Christ for the remission of sins; and you will receive the gift of the Holy Spirit."-Acts 2:38

Knowing the truths of the Gospel and living them faithfully-that is, a life exhibiting the fruits of the Spirit-is true enlightenment, or illumination, as the early Christians put it. It is the state wherein we see God and His will clearly.

"Being baptized we are illuminated. Illuminated, we become sons...This work is variously called grace, illumination, perfection, and washing....Illumination, by which that holy light of salvation is beheld, that is, by which we see God clearly."-Clement of Alexandria

"This is the one grace of illumination, that our characters are not the same as before our washing."-Clement of Alexandria

Christian illumination doesn't end with justification, but is best understood as a continual process by which we are conformed to the image of Christ. The biblical concept of kenosis (κενόω) comes into play here. Kenosis is a Greek word signifying the self-emptying of Christ mentioned in Philippians 2:7. Writing of Christ, the Apostle says:

"...who, though he was in the form of God, did not count equality with God a thing to be grasped, but emptied himself (kenosis), by taking the form of a servant, being born in the likeness of men."

Just as Christ submitted to the will of the Father in humility, we too, as part of the process of growth in holiness (illumination), are to empty ourselves of our own will and desires, conforming our minds and lives to that of Christ. This is known in theology as the Kenotic Ethic, and is the ethic of selfless sacrifice.

"For those whom he foreknew he also predestined to be conformed to the Image of his Son, in order that he might be the firstborn among  many brothers."-Romans 8:29

Of course, our conversion requires repentance, metanoeol (μετανοέω) in New Testament Greek. This word is the verbal cognate of metanoia (μετάνοια), meaning "a transformation of heart".  It is the  moving  beyond (meta) who and what we were in the past, moving away from the sinful ways and concepts of the world, and into the clarity provided by God of the way things in our cosmos really are. This also is a type of enlightenment, or illumination.

It must be stressed here that by illumination we are not referring to some occult concept or process, though many occultists claim illumination. This should be no surprise since the strategy of the Adversary often requires the usurping and falsification of concepts of truth. Non-Christian groups claiming to be illumined or enlightened are rightly judged as being deceived, since no one can attain clarity of understanding of the truth of man's condition, need for a Savior, and the proper way to live, apart from Jesus Christ. Only in our relationship with God, through Jesus Christ, and guided by the indwelling Holy Spirit, is true enlightenment found.
Labels: Apologetics Buddhism Christianity Church Fathers clarity Clement of Alexandria enlightenment illumination J. Davila-Ashcraft knowledge Truth Vedas