Establishing the Philosophical Premise of the Cosmological Argument


1. Anything that begins to exist has a cause. 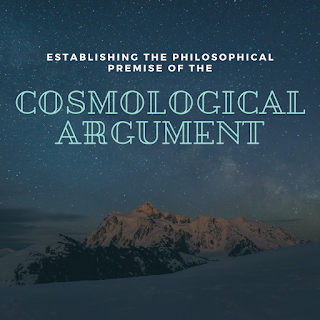 2. The universe began to exist.
3. Therefore, the universe has a cause.

In the Cosmological Argument we propose that it is necessary to admit the existence of a first cause of all finite things, and that this cause is intelligent and personal. We're concerned with efficient causation, an efficient cause being that whose action makes the thing what it is. This point is important since the term first cause may be used in another sense. For example, when the Materialist claims that no other first cause of the universe can be postulated other than natural evolutionary forces, he is in fact asserting that a material cause is sufficient, and that we can dispense with efficient causes altogether. We also have to note another distinction, this time among efficient causes themselves. That is, that between a cause in fieri and a cause in esse. A cause in fieri is the cause of the thing's becoming what it is: a cause in esse is one whose action sustains the thing in being. If I forge a horseshoe, I'm only a cause in fieri of the shape given to the iron. That shape persists after my action has ceased. Likewise, a builder is a cause in fieri of the house which he builds. In both these cases the substances used act as causes in esse with regard to the continued existence of the effect produced. Iron, in virtue of its natural rigidity, retains in being the shape which it has once received. And similarly, the materials used in building a house retain in being the order and arrangement which constitute them into a house. It may be asked whether in these examples we're dealing with efficient causation. Can iron be said to be an efficient cause of the conservation of the shape, as the smith is the efficient cause of its origination? Do the building materials really exercise an efficient causality in regard to the permanence of the structure? Careful reflection tells us that the question must be answered in the affirmative. Inasmuch as the persistence in being of the accident supposes a continuous exercise of conservation on the part of the substance, it stands to the latter in the relation of effect to cause. There are, however, certain effects that require the continued action of the same cause which first produced them. In this case we have a cause which is at one and the same time a cause in fieri and in esse. Thus not only does a candle produce light in a room, but its continued presence is necessary if the illumination is to continue. If it is removed, the light ceases. Again, a liquid receives its shape from the vessel in which it is contained, but if the pressure of the containing sides are removed, it wouldn't retain its form. Similarly, a certain measure of heat was needed that the ice cap, which once covered North America and Northern Europe, eventually melted, and the soil become capable of supporting vegetation. But the same cause must remain in operation if the effect is to continue. If ever the temperature of these regions sinks to its former level, North America and Northern Europe would again be ice covered. In all these cases we have causes in fieri el in esse. I'm not trying to maintain that the cause in fieri is altogether unconnected with the being of the thing which it produces. Becoming is the passage from potential to actual being. The cause which affects the transition—the process of change from the potential to the actual—is indirectly the cause of being also. But its direct effect is limited to the process, and the cause of the thing's continuance in being must be sought elsewhere.

Beyond the vital distinction that we've just discussed, two philosophical principles bearing on causation must be addressed. It must be understood that an effect properly so called demands the actual operation of the cause of which it is the effect, and ceases with the cessation of that action. The horseshoe continues to be, long after the smith has ceased to act, but this is simply because it isn't the effect of his action with regard to being, but only with regard to becoming. Had he stopped work during the process of becoming, that process would have also ceased. Precisely the same is true as regards the cause in esse. Were the substance of iron to lose those natural qualities of rigidity, etc., which conserve the shape given to it, that shape would disappear. Another point of note is this: that whatever demands a cause in fieri also demands a cause in esse. It is absolutely impossible that a thing, which requires a cause to bring it into being, could remain in existence independently of a cause in esse retaining it in being. At first this truth may present some difficulty in grasping. We're accustomed to regard substances as possessing an absolutely independent existence in their own right, apart from any conserving force, as soon as the process of becoming is complete. When the bird develops from the egg, or the oak tree from the acorn, or when a human being, complete as a member of the species, though as yet far from full maturity, is produced by procreation, we readily recognize that the transition from potentiality to actuality demanded a cause in fieri, but the idea that the completed entity needs to be sustained by a cause of its being seems strange. Yet it can easily be shown that this is the case. What is the existence of the thing due to? This existence requires a cause to bring it into being, and can only be explained by reference to this efficient cause. But viewed as a fully constituted and enduring substance, it doesn't depend on the cause in fieri. That cause, as has been pointed out, only effects the process of becoming. Further, it is no longer operative, and what is no longer operative can't now exercise causality. The persisting existence calls for explanation no less than does the original passage into existence. The nature isn't the sufficient reason of its own reality in the full sense of the term. That which even for a single moment is the sufficient reason of its own existence is self-existent, but a nature which is capable of self-existence doesn't need to wait for the action of an efficient cause in order to exist; it must have existed from all eternity. Some might think that, once constituted, the substance can somehow conserve itself unless brought into contact with hostile agencies which are too powerful for it. Yet to say that a thing conserves itself is to say that its persistence through each successive moment is to be attributed to its own existing nature. But the existing nature is the precise thing that we're seeking to explain. We're thus driven by sheer logical necessity to admit that the finite substances of this world, inasmuch as they require a cause in fieri, depend for their present actual existence upon a cause in esse, even though that cause isn't an object of sensible experience. We pointed out, with regard to the shape of the horseshoe, that if the iron lost the qualities which are the cause in esse of that shape, it would cease to be. Its permanence in being, as well as its origination, demand a cause. And the permanent existence being a present effect must be due to the operation of a present cause. What is true of the accident is no less true of the substance. The blacksmith and the horse, as well as the shape of the horseshoe, need a cause in esse. The Materialist can't invalidate this argument by contending that the elementary constituents of which the man or the horse are formed, when they have received the requisite collocation, will retain it much as the building materials secure the permanence of the house when built. Such an objection supposes that man isn't an independent being at all; that he is merely an accidental arrangement of atoms; that he possesses no more true unity than does a house. This is in open contradiction to the facts. Man acts as a single whole. Whether there is question of thought or feeling or of external activity, it is the man as such, not the individual particle, who is the true agent. That which acts as a unit is a unit. Man, in other words, is a single substance- a reality of a higher order than the material constituents that form his body. The efficient cause that sustains him in being is of a higher order than they are. It appears, then, that all those things which experience makes known to us, substances and accidents alike, are dependent on an efficient cause without whose action they couldn't continue in being. Just as the building of a house would be at a standstill if the builder ceased to work, so the builder himself would cease to exist if the cause in esse on which he depends ceased to exert its causality. Who that cause is doesn't necessarily concern us at this point in the Cosmological Argument. It is enough to note that we're speaking of an efficient cause, not a material or a formal cause, and with a cause that is actually operative in regard of its effect.
Labels: Apologetics Becoming Being causes in esse causes in fieri Christian philosophy Cosmological argument Efficient Cause Formal Cause J. Davila-Ashcraft Materialism Philosophia Christi Substances