The Argument from Desire 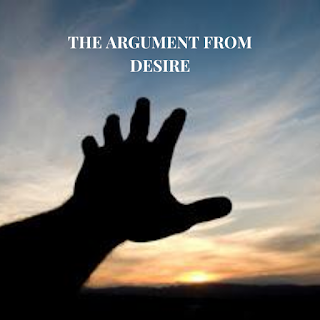 I have asked people whom I've encountered during evangelism efforts a question that always gets the same response. That question is, if you could be eternally happy, healthy, and at peace, would you desire to do so? Ninety-nine percent of the time people will reflect and answer with a yes. It is indeed a natural universal desire for everlasting peace and happiness, both on an individual level and the level of human society. Our natural universal desires, such as hunger, thirst, knowledge, etc. are all capable of being fulfilled. Thus the desire for eternal happiness and peace must also be capable of satisfaction, otherwise it should never have occurred to humanity in the universal sense that it does.

Thomas Aquinas, writing on this, appeals to an Aristotelian principle:

If we put the argument in a syllogism it would look like this:

1.Every natural, innate desire in us corresponds to some real object that can satisfy that desire.
2. But there exists in us a desire which nothing in time, nothing on earth, no creature can satisfy.
3. Therefore there must exist something more than time, earth, and creatures, which can satisfy the desire. 2

Suffice it to say our natural desire for that elusive "something", which is never satisfied, but only briefly quieted by material objects, does indeed point to the necessity for something beyond this material world.

In evangelism efforts I wouldn't use the Argument from Desire as a stand alone argument, since it will rely on other more substantive arguments, but it is a good argument to use with those who cite feelings as evidence of some truth they wish to establish. While feelings are not a trustworthy source of input in the quest for truth, desires certainly can be.