The Eucharist: An Early Christian Perspective 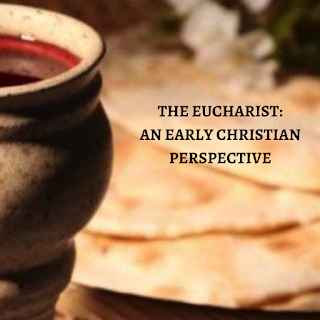 The various denominations of our time have sometimes wildly varying opinions regarding the Eucharist, or Communion. While nearly all agree on the proper matter (bread and wine), not all agree on the proper intention (how we should understand what it is we are doing), or the proper form (the method and prayers properly associated with the Eucharist). It is very helpful to look back to the earliest witness to this very important sacrament found in the writings of the Church Fathers.


The following are just a sampling of the position of the earliest Christians with regard to Communion.

They Rejected Communion in a State of Disunity
"Take heed, then, to have only one Eucharist. For there is one flesh of our Lord Jesus Christ, and one cup of unity in His blood."- Ignatius

The Eucharist Was A Highly Respected Sacrament
"We do not receive common bread and common drink. Rather, Jesus Christ our Savior, having been made flesh by the Word of God, had both flesh and blood for our salvation. So, likewise, we have been taught that the food which is blessed by the prayer of His word, and from which our blood and flesh by transmutation are nourished, is the flesh and blood of that Jesus who was made flesh."- Justin Martyr

"For the bread, which is produced from the earth, when it receives the invocation of God, is no longer common bread, but the Eucharist-consisting of two realities, earthly and heavenly."- Irenaeus

It Is A Means of Grace
"We also eat the bread presented to us. And this bread becomes by prayer a sacred body, which sanctifies those who partake of it."- Origen
It Was Administered By A Bishop or Presbyter

"Let that be deemed a proper Eucharist, which is administered either by the bishop, or by one to whom he has entrusted it."- Ignatius

"And no one is allowed to partake of it but the one who believes the things which we teach are true, and who has been washed with the washing that is for the remission of sins, and unto regeneration, and who is living as Christ commanded."- Justin Martyr
It Was Celebrated Every Sunday

"And on the day called Sunday, all who live in cities or in the country gather together to one place....Then the Eucharist is distributed to everyone.."- Justin Martyr
Bread and Wine Are the Proper Matter

"Those heresies emply bread and water in the oblation, not according to the canon of the church (with bread and wine)."- Clement of Alexandria

"..the blood of Christ is not offered if there is no wine in the cup. The Lord's sacrifice is not celebrated with a legitimate consecration unless our oblation and sacrifice correspond to His passion."- Cyprian
Labels: Apologetics Christian theology Church Fathers Communion Eucharist Holy Communion J. Davila-Ashcraft Patristics Sacramentology