The Nature and Attributes of God: Part 3 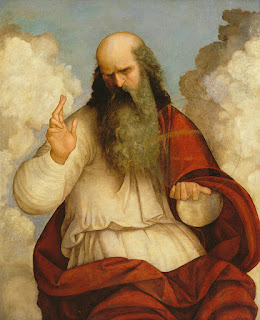 The attributes we've considered up to now relate to Divine operations that are immanent. The attribute of Almighty Power, the immediate principle of the eternal works of God, is also formally immanent, and is identified with the nature of God. But this attribute is virtually transitive, inasmuch as it produces an external effect. We'll examine in order: Infinite Power in general; and the Creation and Conservation of Creatures.

A. Infinite Power
There is no passivity in God. He is Pure Act. In created beings, active power (the faculty) is the principle of an action, and of the effect of this action. Divine Activity is the principle of the effect, but not of the Divine Action which is identified with the Divine Nature. God, being infinite, His power is infinite. Descartes maintained that God's infinite power was compromised by inability to accomplish certain supposed effects, as for instance to make a square circle, ignoring the fact that absurd ideas such as a square circle have no relation to being; a square circle is a non-ens. The necessary law of thought which the idea of a square circle violates proceeds from the immutable being of God.

B. Creation and Conservation
Creation has been defined as the production of a substantial being with out the aid of pre-existing material. The origin of the universe is explicable in three ways only. It is either (a) an emanation from God; or (b) formed from pre-existing material; or (c) created. To suppose that the universe is an emanation from God is to accept Pantheism, which contradicts the necessary and the contingent, the finite and the infinite. Moreover Pantheism implies that the world as contingent effect has come into being without a cause.

No other hypothesis can be logically held except that of Creation. The word "creation" is often used in a loose and illogical way. We hear of "creative evolution, creations of the artist and the poet, etc., but in all instances of earthly change or of human achievement pre-existing material is necessary. No finite creature can truly create; he can only transform mediately that which exists already.

Being as being is the most universal effect, and demands the most universal cause. The tiniest grain of sand postulates infinite power for its creation. When an effect is produced, the poorer the material, the greater the power required in the agent. But when the material is so poor as to be nothing, the power needful for the production of the effect must be infinite.

The end of Creation is twofold:

1. The primary end is the glory of God.

2. The secondary end is the perfection and happiness of humanity.

It is true that some don't, through their own fault, attain their end. But the primary end of Creation, God's glory, is always attained, since all men will witness either to the goodness and mercy of God or will attest to His infinite justice. The Christian doctrine which teaches that God has created in time, and not from eternity, is confirmed by physical science. Though creation from eternity has been defended by some writers as theoretically possible, the constant dissipation of energy to which physical science bears testimony, points not only to the end of the universe, but to a beginning when the vast cosmos was like a clock wound up and ticking. We know that before the Fall, Nature with its hierarchy of being splendidly proclaimed the glory of God. Its true that there was inequality, implied by the harmony and interrelation of parts. All the parts of a tree cannot be flowers. There must be roots, stem, branches, leaves. From inorganic nature to pure spirit, there was manifested wonderful gradation of being, a symphony without dissonance, and all things bore the hallmark of Infinite Power and Benevolence. The Fall has introduced an element of discord, but God by the Divine Redemption has brought good out of evil.

Conservation
To understand the necessity of Divine Conservation, a distinction should be made between causes that are efficient, i.e. always necessary for the being of an effect, and those which are necessary only for the production of an effect. A father is the partial cause of the passive generation of his son. The father dies and the son lives on. However, nourishment, warmth and air are necessary not only for the production of an organism, but for its continuance in being. God is the Supreme Efficient Cause. The creature depends upon God every moment of its existence, and in fact Conservation has been described as a continued creation. If God withdrew His conserving influence the creature would be instantly annihilated. Finally, just as the immediate production of matter necessitates the exercise of Divine Power, so also does its immediate transformation. The immediate change of water into wine, the raising of the dead to life, the multiplication of loaves; such direct transformation is beyond the capability of any created agent.
Labels: Christian theology Creation and Conservation Infinite Power J. Davila-Ashcraft Nature and attributes of God Truth Aloud Apologetics