The Book of Revelation Part 10: The Lamb and the Scroll 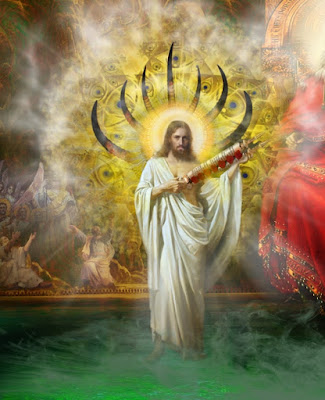 After this I looked, and behold, a door standing open in heaven! And the first voice, which I had heard speaking to me like a trumpet, said, “Come up here, and I will show you what must take place after this.” 2 At once I was in the Spirit, and behold, a throne stood in heaven, with one seated on the throne. 3 And he who sat there had the appearance of jasper and carnelian, and around the throne was a rainbow that had the appearance of an emerald. 4 Around the throne were twenty-four thrones, and seated on the thrones were twenty-four elders, clothed in white garments, with golden crowns on their heads.-Revelation 4:1-4


Commentary
Verses 1-2: The door opened in heaven is a figure of speech signifying that John was taken in vision, even as Paul had been many years before. The prophet sees the throne of God surrounded by the Apostles and the sons of Israel, and spirit beings with censers of sweet-smelling incense. In the midst of the throne stands the Lamb of God as if slain. He is worthy of all honor and praise. All bow down in adoration to Him who alone is able to break the seals of the scroll.

Verses 3-4: The red and orange colors of the jasper and sardonyx are symbolic of the infinite justice of God.

The four and twenty ancients are the twelve Patriarchs of Israel and the twelve Apostles. They are seated upon thrones participating with Christ in the government of the cosmos, a part of the Divine Council. They wear the crowns of royalty because they have been chosen kings and princes in the kingdom of God on earth.

Gold is often seen as a symbol of Christian charity. The white garments symbolize sanctifying grace and the eternal life to which it leads.

5 From the throne came flashes of lightning, and rumblings and peals of thunder, and before the throne were burning seven torches of fire, which are the seven spirits of God, 6 and before the throne there was as it were a sea of glass, like crystal.
And around the throne, on each side of the throne, are four living creatures, full of eyes in front and behind: 7 the first living creature like a lion, the second living creature like an ox, the third living creature with the face of a man, and the fourth living creature like an eagle in flight.8 And the four living creatures, each of them with six wings, are full of eyes all around and within, and day and night they never cease to say, “Holy, holy, holy, is the Lord God Almighty, who was and is and is to come!”
9 And whenever the living creatures give glory and honor and thanks to him who is seated on the throne, who lives forever and ever, 10 the twenty-four elders fall down before him who is seated on the throne and worship him who lives forever and ever. They cast their crowns before the throne, saying, 11 “Worthy are you, our Lord and God to receive glory and honor and power, for you created all things, and by your will they existed and were created.”-Revelation 4:5-11
Commentary
Verses 5-11: Just as on Mount Sinai, thunder and lightning are symbols of God's power and majesty as well as His presence. The seven torches of fire symbolize the seven spirit beings who stand before the throne of God. The four living creatures have been used to symbolize the four greater prophets of the Old Law and the four Evangelists of the New Law. This really ignores the historical context of the writing itself, which is a 1st century Jewish one. These four beings should be understood as literal spirit beings. Each of the four living creatures has six wings. In this they resemble the Seraphim in the vision of Isaiah. With two wings the Seraphim shielded themselves before the majesty of God in adoration and reverential awe. The wings covering their feet may symbolize humility and temperance. The two wings which served for flight likely demonstrate their readiness to act on God's command. The four and twenty ancients lay their crowns at the foot of the throne to acknowledge that God alone is Sovereign. It is only in dependence upon Him that they govern.

6 And between the throne and the four living creatures and among the elders I saw a Lamb standing, as though it had been slain, with seven horns and with seven eyes, which are the seven spirits of God sent out into all the earth.-Revelation 5:1-6
Commentary
Verses 1-2: In the right hand of God, John sees a scroll; but the scroll is sealed to all creatures. No one in heaven, nor on earth, nor under the earth knows what the future holds in store unless God deigns to reveal it. In ancient times a scroll consisted of a long strip of parchment or papyrus wound around a stick to which it was fastened. The writing was on the side of the parchment that rolled in. The scroll which John saw in the vision was written on both sides and sealed down with seven seals. The writing on both sides may symbolize God's absolute knowledge concerning the future. The number "seven" also indicates completeness or universality

Verses 3-6: Christ, the lion of the tribe of Judah, is alone found worthy to break the seven seals and open the book. In this vision John sees our Lord in His sacred humanity It is the same Christ whom John the Baptist pointed out as the Lamb of God. His standing attitude becomes the triumphant Savior. He is upon the throne of God because of His divinity. He is true God of true God, equal in all things to the Father. The appearance of being slain is a reference to the sacrifice of Christ on the cross. The seven horns and seven eyes are the seven spirits of God, the spirit beings whom Christ sends forth into the world as His servants.

Some suggest the seven spirits may also signify the graces and gifts of the Holy Spirit showered upon the Church.

Horns are symbols of power. Thus Zachariah calls our Lord "a horn of salvation." The eyes signify the omniscience of Christ; all times and all things are present to His view.

7 And he went and took the scroll from the right hand of him who was seated on the throne. 8 And when he had taken the scroll, the four living creatures and the twenty-four elders fell down before the Lamb, each holding a harp, and golden bowls full of incense, which are the prayers of the saints. 9 And they sang a new song, saying, “Worthy are you to take the scroll and to open its seals, for you were slain, and by your blood you ransomed people for God from every tribe and language and people and nation, 10 and you have made them a kingdom and priests to our God, and they shall reign on the earth.”
11 Then I looked, and I heard around the throne and the living creatures and the elders the voice of many angels, numbering myriads of myriads and thousands of thousands,12 saying with a loud voice, “Worthy is the Lamb who was slain,to receive power and wealth and wisdom and might and honor and glory and blessing!”
13 And I heard every creature in heaven and on earth and under the earth and in the sea, and all that is in them, saying, “To him who sits on the throne and to the Lamb be blessing and honor and glory and might forever and ever!”
14 And the four living creatures said, “Amen!” and the elders fell down and worshiped.-Revelation 5:7-11
Commentary
Verse 7: The Lamb receives the scroll of the future from the hand of the Father. Knowledge of the future does not belong to the human nature of Christ; it is imparted to His human intellect by the hypostatic union of the human and divine natures in the one divine person.

Verse 8-11: When the scroll is opened the spirit beings, Patriarchs and Apostles all bow down in adoration before God and the Lamb. They also present to Him golden vials and sweet perfumes, symbols of the prayers and good works of all the faithful. The entire Divine Council, comprised of both humans and spirit beings all praise Him in worship and adoration.
Labels: angels Book of Enoch Book of Revelation divine council End Times J. Davila-Ashcraft prophecy Truth Aloud Apologetics