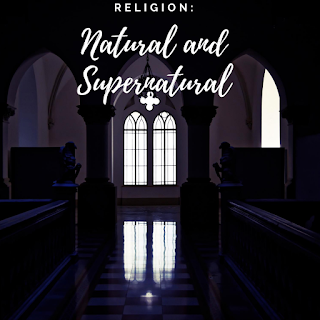 What is religion? According to the etymological meaning of the word, religion may be defined as the sum of the ties or relations which bind man to God. Between God and man there exist two kinds of relations: one results immediately and of necessity from the very nature of man; the other has been added by the free and sovereign will of God. The first kind, with the duties which flow from it, constitutes natural religion; the second forms supernatural religion. It is important to have a clear and accurate understanding of this distinction.

Natural Religion
Man, created by God out of nothing, holds from his Creator all that he is and all that he has: his body with all its senses; his soul with all its faculties. He is indebted to God every moment for the preservation and development of this body and this soul, and the divine concurrence is necessary for every one of his acts. From God also come all the creatures with whom we are in perpetual relation by reasons of necessity, pleasure, or profit. If this is our position, and it is, if man holds everything so absolutely from God that without Him he would have nothing, he wouldn't even exist and act, it is undeniably evident that man belongs to God; that he is His property and possession; that he must live in absolute dependence upon his Creator and Benefactor; that he can think, that he can say, that he can do only what God wills; that he must conduct himself everywhere and always as a subject toward his sovereign master. These relations and these duties are as immutable as they are necessary, for the nature of man doesn't change, and God can't cease to be his Creator and sovereign Master. This absolute dependence on God, and these duties constitute Natural Religion. It can be defined as the sum of the relations which exist, in virtue of the creation itself, between God and man, together with the duties which these relations impose on man. No rational being can doubt the existence and obligation of Natural Religion without denying God and the creation of man, and without destroying the moral order upon which human society is based. Natural Religion finds its revelation in the created world, the created order.

"For his invisible attributes, namely, his eternal power and divine nature, have been clearly perceived, ever since the creation of the world, in the things that have been made. So they are without excuse."- Romans 1:20

Supernatural Religion
Beyond these first connections, God, in His supreme authority and infinite goodness, could have established between Him and His creature higher relations and more intimate communication. Truthfully, nothing obliged God to do more for man than the needs of the nature He had given him required. He instead chose to raise man to the dignity of His son by adoption; to communicate to him, by means of sanctifying grace, a principle of life higher than that which he held from his nature, preparing for him at the end of his life the gift of eternal life with his creator. Thus Natural Religion is perfected when joined to this Supernatural Religion, as Supernatural Religion elevates and perfects the nature of man. The graft doesn't destroy the nature of the tree; it only changes and improves it. New duties for man necessarily spring from Supernatural Religion. These duties aren't a difficult burden, as some suggest. These obligations are actually light and simple, and carried out in faith are compensated by the blessings which result from our elevation to the supernatural order. God assigned us a purpose, a destiny incomparably more important than the purpose we would have had in the purely natural order. Through His grace He gives us much greater facility for observing the teachings of Christ in the Sermon on the Mount, that is, for accomplishing the duties which flow from our nature itself. This Supernatural Religion is also called positive, because it is imposed upon man by a positive and formal act of the free will of God. Supernatural Religion may be defined as the sum of the new relations which elevate man to the dignity of a child of God, and assign him as his purpose the love, knowledge and worship of his creator, through Christ, from whom he also has access to eternal life, as well as the duties which result from its revelation. The revelation of Supernatural Religion is found in the Sacred Scriptures of both the Old and New Testaments.

"All scripture is breathed out by God and is profitable for teaching, for reproof, for correction, and for training in righteousness..."- 2 Timothy 3:16

Summation
God alone is the purpose of the life of every intelligent creature. He may be known directly, i.e. in Himself, or indirectly, i.e. by means of His works. If man had been created only for a natural end, his faithfulness in accomplishing, during the time of his life, the precepts of the natural revelation would have merited for him eternal life. This isn't the case however. Contemplating in creation the traces of God's character and nature doesn't provide us with a perfect knowledge of God. This makes Supernatural Religion necessary. It consists in seeing God as He is in Himself, and consequently in loving Him, worshiping Him, and seeking a fuller enjoyment of Him. To this end the intelligence must necessarily be raised above its own strength by an aid essentially supernatural, first by God's direct revelation of Himself and His will to man, and second through a grace which some theologians call prevenient grace, which allows us to rise above our fallen inclinations to receive the Word of God in faith.
Labels: Christian theology Christianity J. Davila-Ashcraft Natural Religion Supernatural Religion Truth Aloud Apologetics