Q and A on Faith 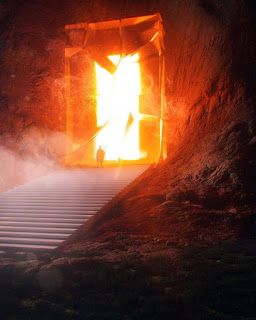 1. What is Faith?
Faith is a virtue infused by God into our souls, by which we believe, without doubting, all those things which God has revealed. 'To believe' means, in general, to hold to be true what another says, and for this reason, because he says it. To believe God means, therefore, to hold firmly and without doubting what God has revealed, and because He has revealed it, although we can neither see nor completely understand it; for faith is founded, not on our seeing or complete understanding, but on the word of God. “Faith is the evidence of things unseen..” (Heb. 11:1).

2. Why do you say that faith is infused by God into our souls? Because it is a gift of God, and an effect of His grace, which enlightens our understanding and moves our will to believe, without doubting, all those things which God has revealed. “For by grace you are saved through faith, and that not of yourselves: for it is the gift of God.” (Eph. 2:8).

3. Why must grace not only enlighten my understanding, but also move my will? Because a good will also belongs to faith; since no one can believe but he who is willing to believe. Therefore faith is also rewarded by God, and unbelief punished. "Whoever believes and is baptized will be saved, but whoever does not believe will be condemned." (Mark 16:16).

4. Why do I have to believe all that God has revealed? Because God is the eternal and infallible truth.

5. Is faith necessary for salvation? Faith is absolutely necessary to salvation; since “without faith it is impossible to please God." (Heb. 11:6).

6. Will any sort of faith save me? No, only properly placed faith, which Christ our Lord has taught, will save us. "Whoever believes in the Son has eternal life; whoever does not obey the Son shall not see life, but the wrath of God remains on Him." (John 3:36).

7. Why will only that type of faith save me? Because by this faith alone, and by no other, we are made partakers of Christ, and without Christ there is no salvation. "And there is salvation in no one else, for there is no other name under heaven given among men by which we must be saved." (Acts 4:12).

8. Is it, then, a sin to say that it doesn't matter what faith I profess?  Yes, it is a grievous sin to say that, or even to think it; since we show despise God by it, who has given us the one true faith, and, therefore, has sent his Only Begotten Son into the world.

9. But doesn't the Bible say: "...but in ever nation anyone who fears Him and does what is right is acceptable to Him"? (Acts 10:35). Yes, but he who fears God also believes all that He has revealed, as Cornelius did (Acts 10). He, on the contrary, who doesn't believe all that God has revealed doesn't fear Him either, but rejects His Word, and denies His veracity.

10. What do you mean by "all that God has revealed"? It means all that God has made known for our salvation by the Patriarchs and Prophets, and most importantly by His Son Jesus Christ and the Apostles. "Long ago, at many times and in many ways, God spoke to our fathers by the prophets, but in these last days He has spoken to us by His Son, whom He appointed the heir of all things, through whom He also created the world." (Heb. 1:1-2).

11. Was it necessary for God to reveal these things? Yes, because without Divine Revelation we would have known some of them only with great difficulty, and very imperfectly; and most of them would have remained entirely unknown to us.

15. Okay, so what do I have to believe? A Christian must believe all that God has revealed in the Old and New Testaments, in their historic, orthodox meanings as explained by the Church Fathers and found in the historic creeds of the church: the Apostles, Nicene, and Athanasian Creeds.

16. How is faith lost? Faith is lost by denying or willfully doubting any single article proposed to us by Sacred Scripture.

17. How is faith regained if it has been lost? Faith when lost is regained by repenting of the sin committed and believing anew all that God has revealed.

20. What are Mysteries? Mysteries are truths beyond finite comprehension, which we cannot completely understand; but we believe them to be true nonetheless. The divine mysteries by their own nature so far transcend the created intelligence that, even when delivered by Revelation and received by Faith, they remain beyond the comprehension of finite intellect.

21. Are Mysteries contrary to reason? No, mysteries are beyond finite comprehension, but not contrary to to reason. There can never be any real discrepancy between Faith and reason; since the same God who reveals Mysteries and infuses Faith has bestowed the light of reason on the human mind, and God cannot deny Himself, nor can one truth contradict another truth.
Labels: Christian theology faith Faith and Mysteries faith and reason J. Davila-Ashcraft Truth Aloud Apologetics What is Faith?