Was Jesus Just a Man? 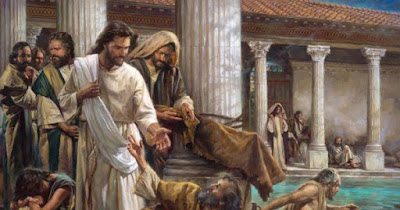 We live in an age of rampant skepticism of anything except for that which passes for science. Science is basically the knowledge of things and their causes. The skepticism of Modernity isn't in reality at all scientific, but is based in either the abuse of Reason, or worse, in Relativism, which is the most unscientific of all ideas. Relativism advances no proofs, attacks everything, and denies even that which is scientifically true. Relativism is, in a word, sacrilegious. Skeptics, and particularly Relativists and Atheistic Naturalists, claim that Jesus was simply a man. This isn't a new idea by any stretch, as Faustus Socinus (1539-1604), declared that Christ was only a man as well. Truth be told, most people today would likely agree with Socinus-even some of those who call themselves Christians! Others go so far as to claim Jesus was a myth. Yet Jesus claimed that He is the Messiah, that He is God. So what are we to think? Does the Bible provide any evidence for the Christian claim that Jesus is God? The conflict between Skeptics and Christians since the establishment of the church has reduced itself to the contention on the part of the former that the Bible is uninspired, and that Christ is not God. The church has fought her side of the discussion more than well. In every battle, when the smoke of the struggle has cleared, it is always discovered that the church is firm on her foundations and she stands in all her beauty with her divine charter intact and her lips still proclaiming that her mission is from heaven and that God is God and Christ is His Son, and that Christ is likewise the upholding power, who centuries ago promised, and held to His promise, that He would be with her until the consummation of time. The early Christians were asked to make a decision, Christ or Ba'al. It is the same dilemma confronting everyone today. We refer to the Bible as an authentic historic document to evidence the fact, a fact as lucid as any fact in the annals of the world, that Christ proved to the Jews beyond the possibility of doubting that He was the Messiah foretold by the Scriptures. It is noteworthy that Christ appealed to their Scriptures. Search the Scriptures, He said, and you will find that He is the one so emphatically spoken of by the prophets.

I. Jesus is the Messiah.
The Jews expected a Messiah, an anointed one, the one sent, the deliverer of the Jewish people and of the world. Some expected a triumphant King, who was to restore to Israel its departed earthly glory. They misunderstood Scripture on this point. They misunderstood the prophecies. In His dealing with the Samaritan woman, who told Him that she knew a Messiah was to come, He answered, "I am he, and I am going to Jerusalem, and all that has been said by the prophets will be fulfilled." He reviewed at another time all the prophets, starting with Moses- all that Moses said of Him, and explained all that had been written about Him in the holy books. He declared His dignity as Messiah and as King of the Jews before the grand tribunal of the nation. This declaration was the chief accusation brought against Him by the Jews (John 19:12). They put over His cross, "Jesus of Nazareth, King of the Jews." It is very hard to reduce such a large personality, a personality foretold by the prophets, a personality unafraid to proclaim His mission and His divine descent, a personality who proved in every way that the Old Testament spoke of Him- it is very hard to reduce such a personality to a myth. Is there an individual in all history, modern or ancient, who looms so largely as Christ? That He was the Messiah is an established fact. All the indications noted by the prophets as to the time of His coming point to Him alone. He appears at the moment Israel is losing her political autonomy, a short time before the final dissolution of the Jewish state. He appears when the second Temple exists and graced it with His presence just before its final destruction, which He prophesied. He is the descendant of Abraham, of the tribe of Judah, of the family of David; He is born in Bethlehem of a Virgin; He is born without splendor. These and other Messianic prophecies have been fulfilled in Him alone. No other historical figure has ever come close.

II. The Messiah is God.
Among the strongest proofs of the divinity of Jesus is His own affirmation. The question of antiquity, Jewish and Roman, was: "Art thou he who is to come, or look we for another?" (Matt. 11:3). "Go and relate," was the answer of Christ, "what you have heard and seen." Christ made His declaration and He confirmed it by the holy life which He led, and later by His resurrection. There was no need of looking for another. The time had come. He was predicted and He appeared. Peter (Matt. 16:16) said in answer to a question from the Master: "You are the Messiah, the Son of the living God." The Master approved of the answer and He reaffirmed the assertion. He declares that He is the omnipotent Master of creation, and of Man, and of heaven, and of the world of spirits, preexisting before all creatures, the light and the life of the world, in all things like unto the Father, having a right to the same worship; He declares accomplished in Himself the prophecy of Isaiah according to which He was to come to save the people; He is the Legislator and King of the universe; He forgives sins. He brings the dead back to life; He is the Judge of the world. Any suggestion that Jesus is a mere man is to call Him a liar or a lunatic.

II. His Self Claims
Is it possible to employ stronger or more sublime expressions to affirm His divine individuality to the world? The people understood Him. They didn't hear Him say that He was a man favored by heaven, or a messenger from God. They heard Him say, and they comprehended fully, that He identified Himself with God. He never faltered in His proclamation of His divinity. When He knew that His fate was sealed, in the presence of Pilate, who asked Him, "Are you the King of the Jews ?" "I am, but I have a kingdom that is not of this world. You shall see the Son of Man sitting on the right hand of the power of God and coming in the clouds of heaven." (Matt. 26:64). Not only was there no faltering in his asseveration of His divinity, but an emphatic and ever increasing impressiveness of assertion. The skeptic might claim this was merely religious fanaticism. Yet we find in the life of Jesus nothing but good sense, calm, moderation, clearness, caution. What must be the conclusion then? Either Jesus Christ is the Son of God, which He declared Himself to be, at the adjuration of the high priest on the day of His death, or He isn't. He clearly claimed He is.

There can be no doubt about the importance of the dogma of the divinity of Christ. It is as momentous as the existence of God is. In fact, all the Christian tenets hang together. Remove one and the others fall apart as well. Deny the divinity of Christ and you deny the existence of God and the immortality of the soul and the afterlife. Repudiation of Christ's divinity is an insult to God. It impugns His veracity and overthrows all evidence. Christ was one who came credentialed from God. His testimony of Himself was backed by prophecy and miracles. The spoken declaration whereby Jesus announced His message is transcendentally marvelous. No such utterance was ever made before or since. It is impossible to mistake the meaning of His words. There is nothing hazy about them. Nor did the leaders among the Jews make any mistake. They knew and understood what He said, and the very lucidness of His terms appalled them and stirred up their lowest natures,  moving them to jealousy and hatred. No violence of theirs was of sufficient force to make Him yield at all in His claim.

III. Was He a Philosopher?
Jesus also wasn't just a philosopher. He didn't study under any Greek philosopher, nor attend the high academies of Rome. He lived in the Galilee, a simple tekton, until emerging onto the scene when the time was right. The simplicity of His doctrine, and those to whom He brought it and chose as His disciples, removes it from the exclusion and intelligentsia of the great philosophical schools. Greece reached its eminence by the superior excellence of her arts and her sciences. No such means were employed by Christ. There was no effort for effect in all his speech. When He addressed Himself to the populace the deepest doctrine fell from His lips, and yet He taught through simple stories much of the time. So we find ourselves driven to exclaim that His assertion of His divinity was unsupported by any natural help. It had only its intrinsic strength to confirm it. It was substantial truth. He didn't engage in the lofty speech of a philosopher, nor the speech of a fanatic. His teachings aren't wild or extravagant. On the other hand, His teachings aren't foolish either. So if His teachings aren't those of a philosopher, fanatic or a fool, what are they? Quite simply the teachings of one speaking the truth. There is no other inference left us. He was God and man and He came as God's ambassador as man, and He came as His own representative as God. His word was the speech of God. There is only one equation for this divine declaration of His own divinity. We find it in John: "In the beginning was the Word, and the Word was with God; and the Word was God."

Conclusion
Again in confirmation of all our assertions we have the wonderful change operated in the world by the introduction of the teachings of Christ. We know what the world was before Christ and at the time of His coming—the state of private and public morals, of the family, of society. We have the startling evidence of a sudden and gradually universal change of thoughts, ideas, principles after His coming. We have the creation of a new public conscience. All this proves His divinity, since it is impossible to adduce a single human agency or a collection of human agencies capable to account for this transformation. Add to this the doctrine which Christ taught. His doctrine was never taught in its entirety and in its unity before His time. He taught concerning the Father, God, and His attributes, concerning Man and the world. There are His moral precepts. They are perfect, ideal, model, regenerating. He was the first to make clear in His own words the nature of divine worship. His doctrine stands out unique in presence of all the doctrines of the world. It moved the admiration of His contemporaries, and has compelled the wonder of all subsequent ages. In itself it is divine, and He proved that it was from God and that He was God.
Labels: Christian theology Christology divinity of Jesus J. Davila-Ashcraft Jesus Jesus the philosopher Truth Aloud Apologetics Was Jesus Just a Man?