The Freethinker: "I'm Spiritual, Not Religious." 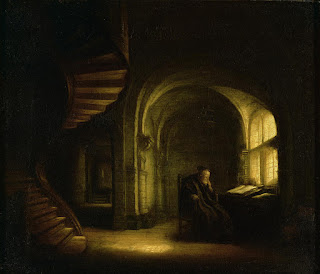 How many times have you either heard or read that statement? If you've been involved in apologetics and evangelism, you've likely heard it more times than you can count. These "freethinkers" believe they have removed the bonds of dogma, they're beyond the need for church.

There is a sort of superstition attached to the use of the expression "Spiritual, not religious." Is freedom the one thing necessary in thought? The great object of the mind's craving is truth; the possession of truth is the end and aim of all its activity. Freedom is but a condition for the exercise of its activity in the pursuit of truth. An aimless exercise of its activity is nothing more than intellectual recklessness. On the other hand, the possession of truth, whether it be the result of free thinking or not, is the mind's one and only source of contentment. There is a healthy freedom of thought, but it can never be identified with that freedom which deliberately sets to work to change the conditions which nature and truth have set for the acquisition of knowledge. Truth is not a thing that starts into existence at our bidding. It is not dependent on us; rather we are dependent on it. Our declarations of independence simply don't extend to the realms of truth. There we are subjects, not sovereigns. This is the first lesson impressed upon us without our knowing it, when reason begins to dawn. We must learn, and not ignore by way of asserting our freedom of thought. Imagine a grade school student refusing to submit his mind to the truths of the multiplication table. And yet a similar independence in maturer minds is sometimes considered wisdom. The truths of the multiplication table, though simply worded, are absolute and eternal truths. That said, are there other truths equally absolute and eternal bearing on our origin, our destiny, our relations to a Supreme Being? And is there a means of getting at those truths? Of course, we Christians say yes, and we offer the means of Scripture, Reason, and Tradition, but these too are rejected by the freethinker.

It is notorious that nearly all of these "spiritual, not religious" freethinkers begin their thinking with the assumption that all these truths of the Christian faith are myths or in some way subjective; or that if they are more than myths there is no way of comprehending them. Thus they actually restrict their freedom and throw away a clue to the discovery of truth. They may be likened to a man who makes a long and fruitless search for an object he has mislaid; and all because he too lightly assumed that there is no use in searching for it in a certain place—the very place where it happens to be. And yet , in this case, the truths lightly set aside are of tremendous importance, bearing as they do upon eternity.

True freedom of thought begets an open mindedness that doesn't exclude from its consideration even a single possible source of truth. It makes an effort to remove from the mind all influences that don't make for genuine knowledge, either because they have no basis in fact, or because they're mere imaginings, or habitual but erroneous impressions, or false or superficial interpretations of the perceptions of sense, or of other sources of information. If by freedom of thought one means a freedom from assumptions and preconceived ideas, it is one of the conditions for arriving at the truth. The precise opposite of this healthy freedom of thought is this notion that freethinking means a rejection of that which doesn't resonate with our emotions or desires for how truth should be. The "spiritual, not religious" are in reality neither, but merely anti-intellectual and have formed a dogma of self indulgence. In short, their disordered desires becomes their religion. While they believe themselves to be freethinkers, they've actually ceased to think at all.
Labels: Freethinker J. Davila-Ashcraft not religious objective truth spiritual the nature of truth Truth Truth Aloud Apologetics