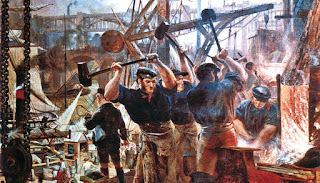 The Socialist Argument—The worker is the sole producer of wealth; therefore he should be the sole owner of it. And yet the capitalist appropriates nearly the whole product of the worker's labor. Minorities and the poor are kept poor by a small cadre of people who amass and hoard wealth. The only remedy for this abuse is the Socialist State, each member of which will be insured the possession of what he produces. After all, the wealthy didn't build the businesses-the worker did!

How should we, as Christians, respond to the economic claims of Socialism? That labor is the only producer of wealth is one of the fundamental errors of Socialism; and as this is the very corner-stone of Socialism as a popular movement. Truthfully, the movement has no reason for existing if this basic principle is false. The aim of Socialism is to revolutionize society by placing it on an industrial basis and by making the workers and a manufactured oppressed class the owners and administrators of all wealth. And how is this to be accomplished? By taking it out of the hands of individuals and transferring to the State all the sources and means of production—mines, lands, factories, machinery, raw materials, and finished products, together with the entire business of transportation, distribution, and exchange. Private property will be confined to the compensation received for labor performed. Each subject of the State must contribute his quota of manual labor, and each will receive from the public storehouse or from the public treasury what his labor is worth. All distinctions will be leveled. A distorted doctrine of equal rights of the strictest type will be carried into effect. Men, women, and children will have the same rights and, as far as possible, the same duties. But advanced Socialistic theory does not stop here.

Socialist society is more thoroughly revolutionized. It was Socialism that first redfined marriage and placed it on a new basis. It was no longer a sacred covenant between a man and woman and God. Men and women enter a contract with the State, and remain united in marriage only as long as either or both of the parties to a marriage desire to do so. Recently the U.S. Supreme Court, under the significant influence of Socialist justices, declared gay marriage as a "right", further redefining the institution. Socialists have always redefined the family as well. Family life is all but abolished in Socialist philosophy. Children will never learn to know or love their parents, for as soon as they see the light of day they will be taken, like orphans or foundlings, and reared under the motherly and fatherly supervision of the State. After all, it takes a village, right? Domestic happiness, we are told, will be merged in the happiness of the community. Family affection will eventually be superseded by a love of humanity.

The Socialist State will be a democracy. The elected representatives of the people will administer the affairs of the State under the people's supervision. Government and law will be adjusted to insure the rights of all,  which has historically proven to mean everyone is equally enslaved to the Socialist State. But what is the motive or the necessity for so drastic a change? The Socialists say that such a revolution is necessary because under the present dominance of private capital the many are becoming poorer and the few becoming richer. In former times the means of production belonged more generally to the individual workman; what he produced was his and no one disputed his right to it; but today the means of production have passed into the hands of a comparative few. One man thus equipped employs hundreds or thousands under a system of combined labor which enables him to produce, by means of a hundred pairs of hands, enormously more than was possible in times past. With this fact as a basis, the Socialist argues thus: If a hundred workmen produce ten times as much today as they could have produced two centuries ago, they are entitled to ten times as much compensation. The only way to secure such compensation is by making the workingmen themselves the owners of the means of production. If they fail then to get their due, the fault is theirs. Formed into a Socialist State in which each of its members will be obliged to work, in order to contribute to the common good, they will severally receive the full value of their labor, or at least as large a percentage of it as can be afforded from the general fund. Private capital, then, as being the great source of industrial evils, is to be done away with in favor of collective ownership. This basic explanation of Socialism is based upon standard Socialist literature. That is, such works as those of Marx, Engels, Ljebknecht, Bebel, Carpenter, Bax, and others, whose writings serve as the standards of Socialist political and economic theory. If a Socialist makes any attempt to disavow any of the above doctrines, he can easily be refuted by his own standard works.

So what are we to think of all this? Socialists, like we Christians, profess to have a reason for the faith that is in them. Let's see if it holds water. They take their stand upon the principle that every one is entitled to be the owner of what he produces. We can accept this in principle—but what then? Well, say the Socialists, isn't it evident that a hundred men in any industrial establishment produce vastly more wealth than they would have produced a couple of centuries ago ? And where does the excess go? Into the pockets of the capitalists; and they haven't moved a little finger in the production of it. The poor worker gets barely enough to pay his rent and feed his wife and children. He has little to pay buy clothing, pay for medical needs, or even a vacation for his family. His entire life is toil. Meanwhile, the capitalist owns three luxury sports cars, a huge yacht, and lives in the best of neighborhoods (segregated of course) in a mansion. The major fallacy here is that labor is the only producer of wealth. In the production of wealth there are other agencies at work more effective than labor. What is the real reason why the worker can turn out thousands of dollars worth of shoes in a day, whereas formerly he couldn't have made a single pair of shoes worth five dollars? The answer is obvious. In the old days they knew only the simplest methods of production. Today the methods of production are more elaborate and immensely more effective. The distinguishing features of the system are chiefly these: the use of machinery, the uniting of many hands under one general direction, the division of labor, the utilization of the physical sciences, superior management, and, finally, the possession of capital, which is constantly renewing the sources from whence it is derived. It is, therefore, the perfection of the system that multiplies the productiveness of the worker. The amount of manual labor is actually less than formerly, but its efficiency has been raised a thousandfold; and the change is due to the system. Therefore, it isn't the worker that produces wealth, but the system and the worker combined. To what do we owe the system? We owe it to thought, science, genius, superior power of administration, and other such causes, but not to the labor of the worker. We owe it to ability as distinguished from labor. If this be conceded, it is manifestly absurd to attribute a surplus value to labor of which the fruits are seized by one who does nothing. The truth of the matter is that labor borrows a new and extraordinary power from ability; and if there is any truth in the Socialist principle that every man is the rightful owner of what he produces, surely the able minds that have added so enormously to the productiveness of labor should receive the larger share of the reward if Socialism is consistent, but it isn't.

I don't want to leave the impression, however, that I'm praising the state of our world post-Industrialization. I'm not. In fact, there is much to criticize and much to reverse if we wish to have a truly healthy organic society again. I'm also not ignoring the real abuses of capitalistic industry. I'm very aware that although the lot of workers, generally, have vastly improved working conditions, there are still classes of workers who are defrauded and victimized by their employers. Let them use the just means that have succeeded in the past, and some hope of improvement will appear. If one half the propaganda devoted to Socialist schemes had been diverted into more practical channels, Socialism wouldn't have the pretext on which it leans today for aiming to revolutionize the world. As a matter of fact, Socialists have done nothing to improve the lot of the people everywhere they've had power. As we learned from the Soviet Union, Cuba, and more recently Venezuela, Socialism divides people based on class, promises them social and economic justice, and then plunges all alike into abject poverty and State slavery. It is a fallacy within a fallacy.
Labels: Christian theology Christianity Cultural Marxism J. Davila-Ashcraft Marxism meta-politics paleo-orthodoxy socialism