Pope Francis to Gay Atheist: "It Doesn't Matter How You Live Your Life..." 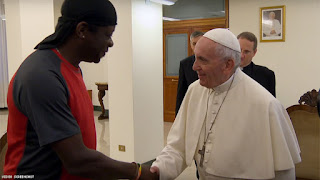 U.K. television personality Stephen Amos, a comedian, atheist and homosexual, met with Pope Francis last September (the meeting wasn't made public until April 19, 2019). Amos and a group of seven  other celebrities were on a 15 day trek which led to Rome. Apparently Francis wanted to meet with him and sent his envoys to secure said meeting. Amos resisted, stating, "I've been quite vocal in my criticism in certain aspects of the Catholic Church. I thought a private audience meant you go and see him, he blesses you and you leave. I couldn't in all conscience go and do that- it's not me."

Amos finally gave in, and when he had the opportunity to speak to Francis, he said, "So me coming on this pilgrimage, being non-religious, I was looking for answers and faith. But as a gay man, I don't feel accepted."

Francis could have taken the opportunity to share the Gospel with Amos and explained why all sin is unacceptable to God, no matter what the kind or type, but that God does love him and gave His life for Him in the person of Jesus Christ, which is far greater and far more compassionate than ignoring our failings. However, Francis doesn't believe in the Gospel of the New Testament, but rather believes in the counterfeit Social Justice gospel of his Marxist ideology. And in keeping with his counterfeit gospel Francis responded:

"Giving more importance to the adjective (gay) rather than the noun (man), this is not good. We are all human beings and have dignity. It does not matter who you are or how you live your life, you do not lose your dignity. There are people that prefer to select or discard people because of the adjective-these people don't have a human heart."1

First, Francis makes the rather uncharitable statement about "discarding" people, implying this is what Christians do by confronting sin. The exact opposite is the case! Confronting their sin, warning them of the dangers is an act of supreme love! And while it is true that we all possess human dignity, that dignity is founded, first, in our being created in the image of God. (Genesis 1:26-27) This indeed includes everyone, saint and sinner alike. On this we would agree with Francis. However, he goes on to commit a serious theological error. That is, he ignores the fact that sin- all sin- is an affront not only to God, but to human dignity, since it is the "defacing" of that divine image in man. Also, the adjective must be dealt with in order for the noun to properly respect and present human dignity. Ignoring the adjective, as Francis suggests, is being complicit in someone's potential eternal damnation.

The second source of human dignity is in the Incarnation of Christ; His becoming Man and sanctifying human existence. Christ lived the perfect human life, showing us the holiness God expects and deserves. For Francis to suggest that "It does not matter...how you live your life.." is quite simply wrong and a sin against both God and the image of God in Man! Not to mention a gross negligence in the responsibility of all Christians to warn people of the results of sin!

Dignity comes with duties. Duties which Francis simply shrugs off in pursuit of his counterfeit gospel of Social Justice. Francis had the responsibility to tell Amos that due to sin, he is separated from God, and upon death will be judged and rendered the due justice of sin; but that God loves Amos so much, He gave His only begotten Son, who came here and died for him, to restore him to God in the fullness of human dignity. Francis chose not to do so, shirking the most basic demand of Christ in the Great Commission. While some would suggest Francis was being compassionate, what he really did was a disservice to Stephen Amos, who now feels more comfortable in sin than he did before the meeting.