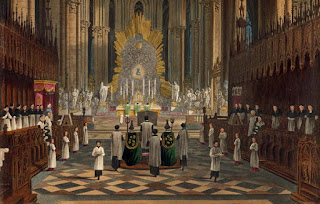 Liturgical worship is viewed by many Evangelicals as being dead religiosity; simply rote prayers with little to no worship in spirit and truth. Is this a true assessment of liturgical worship, and does this criticism accurately reflect the purpose of liturgy?

The worship of 1st century Judaism in the Temple captivated the senses through music, community prayers, vestments, and incense, and yet it was instituted by God Himself. It wasn't simply and solely a matter of external ceremony. It was worship in spirit and truth, though not as yet in the fullness of truth. Christian worship is indeed intended to be an adoration in spirit and in truth; but it doesn't follow that it wasn't or can't have any external expression. Christ Himself practiced outward worship in the ceremonies of Judaism and in the institution of the Eucharist. It was He who instituted the sacraments of the church, and the sacraments are outward rites as well as means of interior sanctification. Outward ritual must, of course, be animated by an interior spirit, but just as outward ritual on its own isn't enough, interior worship alone also isn't enough. Interior worship without the external expression would be imperfect. It wouldn't be the worship of our entire mind, body, and spirit. My fellow evangelicals themselves are conscious of the deficiencies of what often passes for worship in their churches. They feel the need of something to stimulate their adoration in spirit and in truth, which is why we see a movement such as the Ancient-Future Faith Movement. And in many of the more conservative Evangelical churches, such as the Holiness Movement, there are indeed time honored rituals (though they wouldn't call them such) that are observed from generation to generation. Even in those churches not expressly liturgical there are expressions of ritual surviving in their walls, whether it be the Eucharist, baptism, or just the "sinner's prayer" and "altar call". Even such widely respected theologians as John Wesley, who was an Anglican priest to the day he died, preserved liturgical worship in the new Methodist movement.

If outward forms disappear, the habit of inner worship is likely to evaporate. A man who never prays with his lips will soon forget to pray in his heart. Our being is so framed that we must lean for support upon outward acts if we would preserve what is interior. The great Protestant philosopher Gottfried Wilhelm Leibnitz (1646-1716) was in perfect accord with this historical Christian view in this matter—a fact which is evident in the following striking passages taken from his ''System of Theology":

"I do not agree with those who, forgetful of human weakness, reject under pretense of the 'adoration in spirit and in truth' everything that strikes the senses and excites the imagination. For every one who seriously considers the nature of our mind as it exists in this body will easily admit that, although we can form within the mind ideas of things which are outside the sphere of sense, yet we are unable, notwithstanding, to fix our thoughts upon them and to dwell on them with attention, unless there be superadded to the internal idea certain sensible signs, such as words, characters, representations, likenesses, examples, associations, or effects."

''Whatever leads the mind most effectually to the consideration of God's greatness and goodness, whatever excites our attention, reproduces pious thoughts, nay, whatever renders devotion sweet and grateful, all this is deserving of approval."

"I am of opinion that God does not disregard as unworthy of His service, the use of musical instruments, nor vocal harmony, nor beautiful hymns, nor sacred eloquence, nor lights, nor incense, nor precious vestments, jeweled vases, or other offerings; nor statues or images of pious objects; nor the laws of architecture and perspective, nor public processions, the chiming of bells, the strewing the streets with carpets, and the other expedients which the overflowing piety of the people has devised for the divine honor, and which certain people, in their morose simplicity, despise."

Those who hold the view that liturgy is worthless seem to regard rituals themselves as something purely unnatural, or as something merely added on. The truth is that liturgical worship springs from the very heart of interior Christian faith and worship. Granted some have taken ceremony too far and allowed it to become the sum total of their spiritual life, which is a personal error. And true, some denominations have developed rituals that are antithetical to Sacred Scripture; but does an abuse of a thing render its proper use null and void? It is not simply a question of devotion arraying itself in things that engage all the senses in worship, though liturgy does this. It is much more a question of its showing its own interior spirit in the most natural and expressive manner. It is thus that liturgical worship, because it is vitally connected with true interior devotion, isn't a hindrance to true devotion, but rather furnishes a natural outlet for community worship in unity.

Again, the abuse of liturgical worship, either by individuals or institutions, is certainly to be denounced most strongly. Let's not toss the baby out with the bathwater however.
Labels: community worship Evangelical worship J. Davila-Ashcraft John Wesley Liebnitz Liturgy Truth Aloud Apologetics