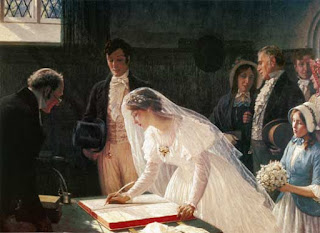 Is it okay for a Christian to marry someone who is, for example, a Hindu? Can Christians marry those of other religions without any difficulty? Is there a biblical approach to the issue? Most will say the problems of inter-religious marriages are exaggerated, especially in a country like ours, in which there is a growing liberality of sentiment in religious matters. In a country in which "your truth-my truth" is the prevailing principle, husbands and wives have little to fear from any religious conflict of their partners in wedlock. Is this true, or are there very real problems with inter-religious marriages?

"Do not be unequally yoked with unbelievers. For what partnership has righteousness with lawlessness? Or what fellowship has light with darkness?"
- 2 Corinthians 6:14

The biblical prohibition placed upon inter-religious marriages is amply justified—even though you may know of cases in which the evils were comparatively small. A few odd cases of inter-religious marriages unattended by serious evils constitute no argument against the biblical prohibition on them. And yet there is scarcely any case in which harm is not done by the union of a Christian and a non-Christian. We can cite far more cases wherein the Christian has found their faith undermined, lost faith, converted to a false religion, or the religious conflict caused the marriage to be ended. Marriage is the most intimate of unions, and in every healthy marriage the tendency of married life is to weld two hearts into one—to produce an identity of thought, desire, purpose, and action. Religion, on the other hand, is one of the most deeply rooted sentiments of the human heart. In the course of human history no other feeling has wrought so powerfully in uniting and in sundering hearts. Some of the bloodiest of wars have had their origin in religious animosity.

Now let's suppose that religious discord enters the sanctuary of wedded life: the more intimate the union, the more bitter the estrangement ultimately produced by conflicting religious sentiment. If the two weren't united so intimately by their state there might not be the slightest antipathy between them. The same pair, if unmarried, might be friends, and difference of religion might not affect their healthy friendship; but make them man and wife, and you will find that you are attempting to mingle oil and water. The state into which they have entered, instead of being a bond of moral union, becomes a principle of mutual repulsion. It is remarkable what a difference there is between courtship and marriage in regard to the predominance of religious feeling in either of the parties to an inter-religious marriage. It is only after the wedding that religious conflict comes to the surface. During courtship Sally is so charmed with Ali as to think that the gospel could never have contemplated a case like hers. Not only is their love sincere, but it isn't cooled in the least by difference of religion. Indeed, Ali seems to be singularly liberal-minded, and it would be the most natural thing in the world that he should one day consent to be a Christian even; if not before, at least after marriage. When courtship is approaching its term the religious question may be forced into prominence by Sally's parents, and Ali gives expression to sentiments which Sally thinks should satisfy any Christian. Before the marriage ceremony is performed, Ali promises not to impose his religion on her or their offspring. The marriage is celebrated—if "celebrate" is the word to designate the simple ceremony which is permitted and which may not be performed within the walls of a church. Soon the honeymoon is passed, and then husband and wife begin to settle down into their old selves. Conjugal love has lost nothing of its depth or of its sincerity, but it has lost a good deal of its enchantment, and things begin to appear in their true colors. Ali begins to realize that he is a partner for life to one who goes to a Christian church and is therefore an "idolater", and that he has pledged himself to let his children be brought up idolaters. But he still loves his wife, he respects his obligations and endeavors to swallow his indignation. But by and by children appear on the scene, and then Ali's religious sentiment really begins to assert itself anew. The idea that now dominates his mind is that he is master in his own house, and he resolves that his house won't be a hotbed of idolatry. The rest of the tale need not be told, since it is an inevitable conflict from that point forward. The evil results are, of course, incalculable. The domestic turmoil would be deplorable enough if they were the only evils resulting from inter-religious marriages, but they're nothing compared with the loss of faith in the children of such unions.

So is inter-religious marriage okay?

1.Sacred Scripture doesn't merely advise you not to marry a non-Christian: it positively forbids you to do so.

2. If it is wrong to marry one who is not of your faith, it is also wrong to contract an intimacy that will probably lead to such a marriage. Be resolute in the beginning and you will save yourself a lifetime of misery. Suppress the tender feeling as soon as it begins to show itself. Seek other company, and trust that Go will one day reveal to you a suitable companion for life.

3. Remember that infatuation and love can warp the judgment, and that an ounce of prevention is worth more than a pound of cure.
Labels: Christian marriage Christianity inter-religious marriage J. Davila-Ashcraft paleo-orthodoxy Relativism