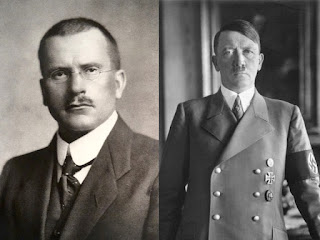 Most have heard of Carl Jung, quite famous for his contributions to psychology and psychotherapy. What is perhaps less well known is Jung's antisemitism and his lifelong connection to Nazi and Esoteric Hitlerism cults. Esiteric Hiitlerism is a term used to describe a number of mystical interpretations of National Socialism and of the person of Hitler, forming themselves into neo-Gnostic cults of race. National Socialism contained within it a very specific spiritual ethos that lends itself to this new expression of the ideology of Hitler, which can be called nothing other than Pagan. This spiritual ethos in the bloodstream of National Socialism manifested as a desire to return to a perceived original German consciousness and way of life-a "pure" Germano-Paganism. It was the position of such leaders in the Nazi Party as Alfred Rosenberg and Heinrich Himmler that not only would this make Germans what they once were, but that the adoption of Paganism would remove what they saw as the Christian penchant for a more passive society, and a return to a more fierce, warlike tribal spirit that would more effectively advance the National Socialist cause. This occult romanticism of German Paganism was echoed by Jung in 1923, when he stated:

"We [Germans] need new foundations. We must dig down to the primitive in us, for only out of the conflict between civilized man and the Germanic barbarian will there come what we need: a new experience of God."

When notorious occultist Jakov Hauer founded the Nordic Faith cult, Jung urged participation on the part of Germans who were "intelligent enough not only to believe but to know that the God of the German is Wotan and not the Christian God."1 The National Socialists recognized in Jung an integral piece of the overall puzzle of how to make their planned Pagan culture a reality. In 1933 Carl Jung was appointed President of the German Medical Society for Psychotherapy by the National Socialist Party. Jung wasted no time in founding a forum for an antisemitic belief he had held since 1918: the need to distinguish between "German" and "Jewish" psychology.2 According to Jung, such a distinction was not really antisemitic, it was actually more of a “liberating” distinction, for both Aryans and Jews. This isn't to suggest that Jung held any love or respect for the Jews.

When Jews were fleeing Nazi Germany to escape persecution and concentration camps, he wrote to his academic followers in England, urging them to maintain "negative feelings" about Jews and resist allowing them to participate as colleagues, following his own example. He viewed the National Socialist pogroms against Jews as the just results of their psychology, due to their clinging to a deity he deemed the Demiurge-an Gnostic occult concept. In Jung's view, Yahweh, the God of the Old Testament, was a false and evil god who obstructed knowledge, progress and wisdom.

Jung further justified National Socialist aggression, both at home and abroad, as being a necessary step to the revelation of a great "light"; the light of the National Socialist Pagan State. And in Jung's view those who participated in the advancement of the National Socialist cause couldn't be accused of crimes against humanity, but were simply those whose task it was to destroy decadence in order to make a "rebirth" of Aryan consciousness possible. Jung refused to denounce the concentration camps, the persecutions of Jews, or the National Socialist Party until 1945, when it became clear that the Third Reich would collapse, and he had to do something in an attempt to salvage his career after the war. Yet even after denouncing them, he maintained a close relationship with Esoteric Hitlerism leaders such as Miguel Serrano, and continued to cite the need for a pure "Germanic, Jew-free psychotherapy".

Far from being the wise and progressive thinker Leftist revisionist history would have us believe, Jung was an occultist, a lifelong racist, and likely a devotee of the core of National Socialist racial and spiritual theory throughout his life, and many of his theories are based in these ideas. Interestingly, Jung is a darling of Alternative Spirituality, New Age sects, and the occult underground, and remains very influential in psychology and psychotherapy today. In my book, that's not a good thing.