Can't We All Decide What Scripture Means Ourselves? 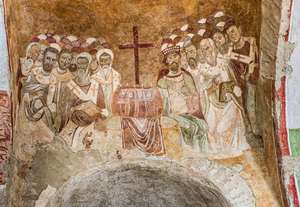 Do we need Church Councils or any ecclesial authority to explain the meaning of Sacred Scripture?After all, doesn't the Bible alone reveal all necessary truth to all who approach the study of it in the right spirit? In the Scriptures God speaks to the human soul, and no interpreter of His words is needed but the soul itself, enlightened by the Holy Spirit.

The above is a fair statement of the approach to Scriptural interpretation by many. It differs essentially from the historically Christian (and early church) principle, according to which private interpretation is controlled by the authority of the divinely established Church. What are the grounds of the Private Interpretation position? As the Bible is the only rule of faith for the advocate of Private Interpretation, he should be able to quote chapter and verse for this as well as for any other article of his faith. Where in the whole compass of Sacred Scripture is there a passage enunciating the principle of private and independent interpretation? There are a multitude of Scripture verses setting forth the benefits resulting from a reading of the Word of God, but none which declare that the individual reader is independent of all external control in his interpretation of it. In opposing such independence I don't mean to imply that the Bible is simply an unintelligible book. Quite the contrary, many parts of Scripture are simple narratives and statement of fact, and the more obvious sense of the text is the true one. But other parts of the Bible abound in mysteries, or in other obscurities of one kind or another. This was doubtless the case even in the original autographs, not to speak of the modern translations. Now, is it likely that every single reader, however good his disposition, possesses a key to the Scriptures and sees his way through all their obscurity of thought and expression? Isn't it to be feared that the assumption of such power of interpretation will have spiritually dangerous, and in some cases even disastrous, effects upon the reader? Peter the Apostle, speaking of the epistles of Paul, says of them that they contain certain things "in them that are hard to understand, which the ignorant and unstable twist to their own destruction, as they do the other scriptures." (2 Peter 3:16). If this declaration, made by no less an authority than Peter, and to the very people to whom the epistles of Paul were addressed, was justified at the time, isn't it more true, after twenty one centuries, the same causes are producing even worse effects? The Apostle here mentions two effects which he traces to three causes. The two effects are:

1. Twisting — that is to say, distorting of the meaning of Scripture;
2. The spiritual self-destruction of the reader.

1. The intrinsic difficulties of the text;
2. Ignorance;
3. Instability

The same three causes are in operation today, and doubtless tend, in varying degrees, to produce the same effects. The text, with its intrinsic difficulties, remains. Ignorance remains; since most don't pursue a theological education, but focus on their vocational education, or basic high school education they're not equipped to interpret Scripture any more than the theologian is equipped to answer questions of chemistry. The question put to the advocate of Private Interpretation is, what special insight into Scripture is furnished by high school education or vocational training? Certainly some have gone much farther, gaining Master's degrees in their fields. They're not ignorant people. True, such aren't ignorant within the scope of their chosen field, but if we're not dealing with someone who has dedicated their studies solely to Sacred Scripture and Christian Theology, then the Chemist, the Physician, and the Biologist aren't in a position to speak to the meaning of Scripture accurately. We have theologians for this purpose and they have helped us to understand Sacred Scripture throughout the history of the Church-most importantly in the common consensus of the Church, found in the Ecumenical Councils. While it is true that the theologian can be incorrect, his insight will generally be much more accurate than the layman, and he will have the entirety of Christian orthodoxy to contend with, as well as his peers.

Some might suggest that a man can approach the reading of the Scriptures in a prayerful spirit, and he can expect to receive interior illumination. Doubtless a prayerful reading of Scripture has produced much insight into the meaning of the sacred text, but let's not mistake the issue in the present discussion. I don't deny the possibility of personal illumination. God, from the beginning, has deigned to speak to the individual soul. But—and this is the most important point—there is nothing more illusory than the impression of having been enlightened from on high; and in the whole course of religious history nothing has proved more pernicious than the seeing in supposed illumination a practical rule of faith or of conduct. Where God really enlightens, no one can enlighten as well; but it is one thing to be enlightened, and another to think oneself enlightened. Many of our Christian and Biblical saints have received special insight, but none were more distrustful of such illumination than the very recipients of it. And yet just the contrary has been the case with those in, for example, the Word of Faith Movement, or the New Apostolic Reformation, or even Charismatic circles, who have confidently proclaimed a special illumination in their interpretation of Scripture. And when we see the number of such claimants to inspiration and compare their clashing creeds—all based on the same Word of God—and listen to the war of words in which each denounces all the others, we begin to see the utter hollowness of the theory of Private Interpretation. Spiritual chaos was never intended to be the result of the preaching of the Christian revelation. And yet chaos is the necessary result of Christian preaching when it is based on private interpretation.

Worse than chaos, however, are the ultimate logical consequences of the theory, since amidst the chaos at least some fragments of the truth remain; but even these are destined to disappear under the even more insidious theory of Independent Judgment. It dissolves the fabric of Christianity itself. Personal illumination is, therefore, in no absolute sense a safe guide. In one's meditation on Scripture one may, of course, feel that reflection throws some light upon words or sentences that were obscure to you before; many sound conclusions may be drawn; spiritual insight may increase; but still, considering that there are many things in Scripture that are hard to understand, and that so many readers of Scripture have been mistaken in their interpretations, it is only rational that one should submit to guidance, if a guide can be found. And that a guide has been provided by God can't be in doubt when one reflects on the unspeakable wisdom displayed in all God's works and, on the other hand, on the sad consequences which are seen to follow the rejection of authority in so important a matter as the interpretation of the word of God. Evidently, then, there is an authoritative interpreter appointed by God Himself; and that interpreter can be no other than the Church itself as it meets in council to discern the meaning of God's Word. If Paul is correct in his assertion that the Church is the "pillar and ground of truth" (1 Tim. 3:15.), then we're bound to accept its conclusions on matters of doctrine.
Labels: can't we decide what scripture means for ourselves? Christianity J. Davila-Ashcraft Private Interpretation Private Judgement Scriptural interpretation theology Truth Aloud Apologetics