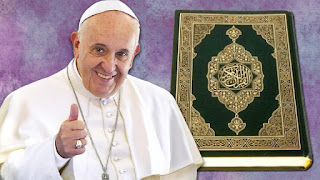 At a recent  General Audience, Pope Francis spoke about his recent trip to Morocco, where he made the heretical statement that, "..being a Christian is not about adhering to a doctrine." The Pope likened his visit to the Muslims of Morocco to that of the famous Saint Francis, who over 800 years ago met with the Islamic Sultan Al-Malik Al-Kamil. Of course, Pope Francis claimed that he, like St. Francis, came with a message of peace and fraternity. This isn't quite true. While the Pope's message was one of the error of Indifferentism and Naturalism, St. Francis brought a message that was clearly Supernaturalist. When the Saint met the Sultan, the Sultan asked who sent the, and for what purpose. St. Francis' answer was anything but indifferent. He replied, "We are not sent by men, but it is the Most High who sends me, in order that I may teach you and your people the way of salvation, by pointing out to you the truths of the Gospel."1

Rather than sharing the Gospel with the Muslims of Morocco, as any true disciple of Christ would, Pope Francis instead launched into the usual rhetoric, designed to placate the Islamic temper, rather than tell the truth. He said, "With the Muslims, we are descendants of the same father, Abraham." This statement can only be taken two ways:

A Statement of Naturalism- If he is suggesting that Christians all share the same biological ancestry back to Abraham, he would be wrong. Not all Christians can trace their lineage to Abraham, and even those who can, it doesn't matter, since in the Gospel there is neither Jew nor Gentile. Thus, his statement is false.

A Statement of Spiritual Commonality- This means that Pope Francis is claiming that we are spiritually linked by worship of the one true God, which is a false statement as well, since Muslims don't worship the God of Sacred Scripture, nor do they accept the claims of Jesus Christ, in whose name alone Man can be saved from damnation.

No matter how we look at this, Pope Francis is making egregious theological errors.

Is this comment objectively true? Again I'm forced to say, no. While God does, in His permissive will, allow false religions to exist, it is not true that these false religions draw people nearer to God, or encourage their adherents in "looking to God." In fact, these various false religions are only the doctrines of demons, the spiritual deceptions of the "principalities and powers", the "cosmic powers over this present darkness", the "spiritual forces of evil in the heavenly places." (Ephesians 6:12)

In other words, Pope Francis' Indifferentism has led him to advocate a certain equality- even a dignity- to the religions of the world that bring glory only to the demons behind them. Not content with making this statement of blasphemy, he then suggests that, "..what God wills is fraternity among us in a special way...We must not be scared by the difference: God has permitted this. We must be scared if we don't act with fraternity, to walk together in life."

Pope Francis makes both an error in logic, and yet another egregious error in theology. First, simply because God permits Man to use his Free Will to do something, or even to propagate false religions, doesn't mean that we should therefore partake in it. God permits outright Satanism to exist, but this isn't an excuse to join with the Satanist in "fraternal life". There are many things God permits that we should certainly be fearful of partaking in, including adultery, homosexuality, theft, murder, etc. The Pope's woeful lack of logic here is almost shocking, were it not deliberate.

The theological error is his suggestion that we must join together with false religionists in fraternity, whereas Sacred Scripture tells us:

"Beloved, believe not every spirit, but test the spirits, whether they are of God; because many false prophets have gone out into the world."- 1 John 4:1

Which will you listen to; the Marxist Pope or the inerrant Word of God?