Freedom and the Moral Law 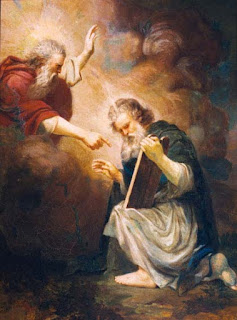 Freedom is something which we in the West are very fierce in our defense of. To reduce it in any sense is considered an attack on human dignity, the Bill of Rights, and the Constitution. Is it true though, as some say, that we can do everything that we want to do? That we are constrained only by our personal code of ethics or morality? That we determine what is good and what is evil? This is important since our answer informs how we interact with our world, and how we view morality and ethics.

Are we free to do everything we want to do physically? On a practical level, unless we have a physical handicap, we enjoy a degree of freedom of movement. We are able to move our heads, to raise fingers, to run, etc. But this physical freedom isn't unlimited. For example, while we can flap our arms, we can't fly. Our freedom of movement is governed by rules which we are unable to violate. We can't live without eating, just as we can't eat just anything we want. To rebel against the limits of our physical liberty is useless. We are forced to submit ourselves to the laws of nature.
Are we free to do everything we want to do psychologically? Our thought and our will possess a certain degree of freedom as well. You can imprison someone for not believing in a political ideology, beat him, torture him, but you cannot prevent him from thinking how much he detests your political ideology, or of wanting to overthrow your rule. You can prevent him from expressing his thoughts by force, but one cannot force him to change his opinion; he keeps his freedom of thought.
Are we free to do everything we want to do morally? Imagine that I have the choice between two paths to arrive at an appointment, one is long but nicer than the other. Before making my decision, I use my intelligence to find out which is the better route for me. I ask myself which is the best for me, the less tiring or the promise of beautiful scenery? The solution could vary according to circumstance, but I'll always seek to take the best route. My free-will permits me, in fact, to choose a way to reach what is good. That which I seek is what is perceived as the best for me. That doesn't mean I can't be wrong. I can be wrong in what I think is a good. I could mistakenly follow the impulses of my disordered sensibility rather than the judgment of my intelligence. For example, I could eat a well balanced meal or I could eat ten candy bars and drink two sodas. If I subsequently become sick from eating the candy bars, my choice wasn't made to experience what is clearly painful, but what I deemed, ever so wrongly, as a good for me.

This is important because it proves that freedom is not an end in itself, but a means to achieve an end. Like it or not, our current culture treats freedom as an end, and thus all sorts of disordered behaviors and attitudes have emerged. That which makes freedom important is the value of that which it allows to be achieved. In itself, freedom is only a potentiality. For example, I'm free to see a movie. I have the possibility. It is evident that this possibility has value only in relation to the film in question; if it relates to a good film, I'll be excited by the possibility which is given to me; if I know, on the contrary, that the film is long, boring and poorly written, I have no reason to be particularly excited. One sees by this that freedom isn't a goal or end in itself. Freedom is only valuable because of the good it permits us to achieve. It has no value except in as far as the thing which one achieves is good in itself. If one always seeks his good, he can be mistaken in his judgment. For example, he could take a poisoned fruit, whether he wants it or not, that fruit will make him ill, or potentially kill him. If Man has, therefore, the power of freely directing himself toward his good, he doesn't however, have the power to always properly know what is good for him, nor to render something good that isn't. He could never render a poisonous fruit a health tonic. Things are good or bad independently of his will. This is what one wants to express when speaking of moral freedom. By moral freedom one means the right Man has to do that which is good for him, whether he wills it a good or not. Man is free and can be mistaken; so Moral Law exists to indicate that which is good. The Moral Law shows that a hierarchy exists among the good things. My life has more value than the momentary pleasure or satisfaction obtained through a poison fruit, even if it is delicious. One doesn't have the right, therefore, to sacrifice a higher good for an inferior ill perceived “good”.


Challenge: Your freedom stops where your neighbor’s begins.

Reply: What if your neighbor and you aren't in agreement on the limits? Who will decide? The State? And in the name of what? Of the people's will? The Rights of Man? Even the concept of the Rights of Man asserts that public authority is founded on the people's will. One ends up, therefore, in a vicious circle. Consequently, my freedom must inevitably be limited by some objective thing. That objective good will be as independent of my will as that of my neighbor’s because, otherwise, what could compel me to respect the freedom of my neighbor?

Challenge: I have the freedom to do whatever I want, as long as I don't hurt anyone else.

Reply: Every one of our actions, even the most private, has an influence on society: to keep in good health, to enrich one's mind, to practice one's profession can't but have good results; while laziness, deceit or theft cannot but have harmful results for those around us. Look at the lives of drug addicts. They destroy and make difficult the lives of their spouses, children, families, and are often criminals- public nuisances. Whether we want to admit it or not, we aren't autonomous individuals placed one beside another; we are members of the same society.

Challenge: I'm the only one who can say what is good for me.

Reply: That is exactly what many drug addicts and alcoholics say. Our judgment of what is good is never fully trustworthy, and thus needs an outside source to inform it. The very fact that we instinctively know there are moral laws that transcend culture, time and place, as well as our individual will, tells us there must be a transcendent Moral Law Giver. This Moral Law Giver is God.

Challenge: If we're subject to such laws, then we're not really free.


Reply: If laws didn't exist in nature, Man could construct nothing substantial. It is by relying on the laws of gravity, or physics, etc. that Man succeeds in constructing what he wants. It is in so far as he submits to them that he makes use of his freedom. It is through them that he is free to act. It is the same with Moral Law. It is the means of our freedom. You can't have freedom without Moral Law.
Labels: free will Freedom J. Davila-Ashcraft Liberty Moral Argument Moral Law Moral Law Giver paleo-orthodoxy