The Persistent Problem of Evil 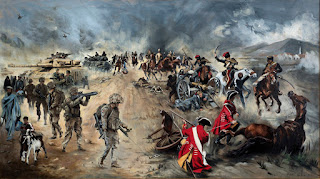 If you've ever been involved in evangelism efforts it won't be long before someone drops the question on you. "If God is so loving, why do bad things happen to good people?" It may seem a tedious and tired question, but it does demand an answer. Why do infants die? Why does disease spread and kill so many in pandemics? Why is there so much evil in the world? If God is all-loving, just and good, why so much hatred, injustice and evil in the world? All good questions.

First, we must understand that there are two forms of evil in this world.

Natural- These are the evils arising from natural causes. This would include things like diseases-cancer, deformity, etc.- as well as other sources of undeserved suffering and pain.

Moral- I realize this isn't popular to say in this post-Modern culture of relativism, but it is true nonetheless. Moral evil results from personal depravity. War, murder, stealing, lying, cheating, sexual promiscuity, and exploitation- all arising from the human will.

How do we reconcile the omnipotent (all-powerful), omnibenevolent (all-loving) God with all of this evil we witness in our world every day? One atheist thinker (J.L. Mackie, 1917-1981) expressed the problem thus:

Is Mackie's argument sound? On the face of it one might be tempted to say yes. However, there is a glaring flaw in Mackie's logic. It is true that God possesses all the attributes listed. It is also true that there is evil in our world. And I agree that God has the knowledge to prevent evil. Mackie's logic breaks down when he states, "An omnibenevolent being has the desire to prevent evil." There are examples throughout Sacred Scripture of God preventing evil, as well as allowing an evil either to bring about a greater good, or to prevent a greater evil. Clement of Alexandria put it this way:

"For it is the work of divine wisdom...to ensure that whatever happens through the evils hatched by someone, a good and useful result will come of it."

And on what basis does the atheist claim anything is good or evil?

If moral relativism is true, then they have no ground upon which to argue their case.

Christians understand that the problem of evil is not a problem with God, but a problem with humanity. Our first parents rebelled against God and brought evil, disease, and death to the entire human race. We each have free will. It is the  abuse of free will, the ability to choose our actions, that is at the root of all human suffering.

"Evil has sprung from voluntary apostasy."- Clement of Alexandria

Mackie's conclusion is a fallacious one, as it is just as logical and reasonable that the loving, just God exists and works to restore a world steeped in evil due to humanity's own volitional choices to commit such acts. The two are not mutually exclusive, and thus Mackie's dichotomy is a false one. Interestingly, if God were to have made us automatons, incapable of free will, then we would also be incapable of truly loving or truly committing any act of kindness and compassion as well, since they would simply be rendered involuntary acts of programming and not acts of the human spirit. Undoubtedly the skeptic would hate such a deity who did so just as much as he/she hates the God that actually exists. What lays at the root of most questions regarding evil is really an emotional issue, which should be dealt with on its own merits first, before proceeding to deal with the logical theological implications of evil. The emotional questions, 'Why me?', 'Why this?', 'Why now?' , need to be answered. If we first confront our own personal pain, we can begin the process of healing and are always in a better position to understand evil, and even helps us see how our struggles to overcome these evil choices humanity makes often moves us to be better people. If we're going to grapple with the question of evil, lets do so from a place of self-reflection and honest introspection. Let us try to see it from the viewpoint of God working even in the worst of human caused evil to bring about good, and not the limited viewpoint of a depraved, self indulgent humanity.
Labels: evil free will J. Davila-Ashcraft J.L. Mackie moral evil natural evil paleo-orthodoxy the problem of evil