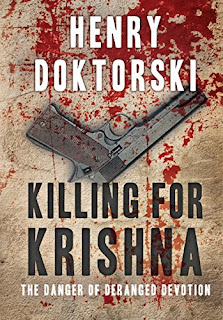 I just finished reading the book Killing for Krishna, by Henry Doktorski. This in depth book exposes the intricate, yet haphazardly executed assassination of Steve Bryant, a member of the International Society for Krishna Consciousness, in 1986. This society, known as ISKCON, was founded in New York in 1966 by the Indian guru A.C. Bhaktivedanta Swami Prabhupada, a Bengali and part of the historic Gaudiya Vaishnava religion. I  managed to read this 662 page book in just four days, it was quite honestly that intriguing. Doktorski himself is a former member of ISKCON, and indeed a former disciple of Kirtanananda Swami Bhaktipada (Keith Ham), the rebellious and perhaps quite insane ruler over New Vrindaban, an ISKCON farming community/ashrama Kirtanananda helped to found.

Doktorski is able to tell this story in a way that no other author possibly could. Why? Well Doktorski has first hand knowledge of the goings on at the community during the period, and he possessed thousands upon thousands of pages of personal letters, official documents, and even secret materials that were taken from New Vrindaban after its collapse, and subsequently given to the author. These unique conditions put him in a position to give invaluable insight into the group think that prevailed during those years in ISKCON, and may continue even to today.

Kirtanananda Swami was anything but the advanced spiritual master his disciples believed him to be. In fact, as Doktorski proves beyond a shadow of a doubt, he was a child molester and active homosexual who craved cocaine and indulged in gay orgies in his private quarters at the ashram. Steve Bryant, who had a grudge against Kirtanananda regarding his having initiated Bryant's wife without his permission, as was the custom, and for then marrying off his wife to another man and helping to obstruct his access to his children, began to expose the various rumors he collected regarding Kirtanananda's very un-guru-like behavior. As Doktorski explains, ISKCON's theology renders any criticism of a guru as a major offense, as it is viewed as insulting a person who is considered to be "as good as God". As one might imagine, to those living in such a fanatical cult of personality atmosphere, Bryant's actions were taken as the gravest of grave offenses. In fact, they launched what became a systematic surveillance of his movements which finally resulted in his murder by Kirtanananda's "enforcer" at New Vrindaban, Tirtha dasa (Thomas Drescher), who is today serving a life sentence for the murder of Bryant and one other disciple of Kirtanananda who crossed the line.

In reading this book I found several things of interest. First, the cult dynamic that grew around Kirtanananda Swami to such an extent that he could literally do nothing wrong in the eyes of most of his disciples. Doktorski accurately calls this "deranged devotion". It would be very easy for me, as a Christian, to sit back and point the finger at such groups as ISKCON for being infected with such deranged devotion, but we've seen it in Christian circles as well. There are many popular evangelists, etc. who have significant followings which will defend their chosen one with all the fervor of any Hare Krishna devotee. I myself was personally the target of one such charismatic "apologist" who posted lies about my education, my personal life, and even at one point claimed my name was fake. He personally engaged in harassing me online, sending me multiple threatening messages on a daily basis, sometimes four and five times a day. His faithful followers, who obviously believed anything he said to be absolute truth, also harassed me and re-posted his calumny on other websites at his request. I had to literally threaten litigation to get him to stop sending me threatening emails. All of this anger and hate directed at me simply because I dared to disagree with him on a theological topic in a forum. It was revealed upon his death that he had been arrested numerous times for public intoxication and domestic violence. Some of his followers, still loyal to him no matter what, actually claimed he was "taken out" by some secret nefarious forces due to his prophetic insight. No, deranged devotion isn't limited to groups on the fringes of western culture like ISKCON.

Another thing that struck me about the details of the plot to murder Bryant was the lack of clear, definitive connections to Kirtanananda Swami himself. While it is abundantly clear that Kirtanananda was anything but what he professed to be, the murderer, who at first implicated the Swami directly in the plot, later said he really had no firsthand confirmation of any such directive coming from Kirtanananda. One is left with a tiny hint of doubt as to whether Kirtanananda was actually directing it or not, as he is reported by multiple sources as having made statements defiantly against the crime. Whatever the case, the Swami's closest confidant, and lifetime homosexual lover, made it clear to the members of the murder plot that Kirtanananda wanted Bryant dead. Add to this confusing mix of finger pointing what appears to be an underlying plot-within-a-plot, possibly engineered by local law enforcement officials to take the Swami and the entire community out, and you have a truly intriguing web of lies and conspiracy. Let me be clear though, Doktorski leaves very little doubt that Kirtanananda Swami was aware of the plot and did nothing to stop it, even if he didn't openly encourage it. He was reportedly a very tricky, manipulative personality who would have been careful to make it seem he wasn't at all supporting it just to save his own skin if things went wrong.

In 1996, though indicted on conspiracy to murder, six counts of mail fraud, and five counts of racketeering, the Swami went to prison with a sentence of only 20 years, but not for conspiracy to murder. You'll have to read the book to find out what sent him there. Almost all of his disciples had by that time finally realized he was not what he seemed and had abandoned him (again, read the book to find out what finally broke the spell. Hint: It wasn't his conviction). A small enclave of the most ardent supporters relocated to New York, starting a tiny center known as the Sanctuary/Interfaith League of Devotees. He was paroled on June 16, 2004, and joined his disciples in New York. Not long after arriving there he was accused of fondling a boy's genitals and was evicted by his own disciples who had believed in him all this time, but now had finally seen the light. He then flew to India, where he still had a significant following comprised of people far removed and ignorant of his criminal activities in the U.S., where he died several years later.

All in all, this book is a fantastic glimpse into the world of ISKCON, the theology of Gaudiya Vaishavism, and the dangers of deranged devotion. I highly recommend this book to anyone interested in comparative religion, psychology, theology, world religion, or just true crime. This book is, in my opinion, a must have in any apologists library.