Noah, the Flood, and the Age of the Earth 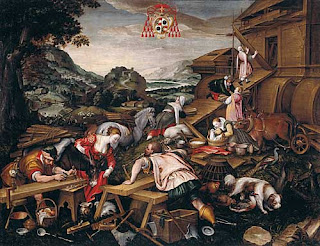 One of the inevitable challenges to the Creationist worldview is the age of the earth. While there are many arguments to support a young earth position, perhaps surprisingly the biblical account of the Flood is one of the most compelling, if understood correctly. If as a Christian you accept the biblical account of Noah's survival in the midst of a worldwide deluge, you cannot also hold to an old earth model. Genesis chapters 6 through 9 hold significant implications on geology and the age of the earth. As Geological Historian Dr. Terry Mortenson puts it:

There is plenty of evidence to support the effects of this worldwide Flood. For example, fossils are made under very specific conditions. Evolutionists claim the animals die and are gradually covered up by soil where they are found after digging through layers of dirt that prove they laid there for millions of years. The facts is, they would have to be buried rapidly, otherwise they would rot and/or be eaten by scavengers. And what do we find in the fossil record? Incredible mounds of evidence of animals buried and fossilized so fast that they were still in the process of eating their food and even giving birth.

Another example is the fact that fossilized trees have been found standing upright through more than one layer of soil. This could not happen to trees if we were looking at a process of millions of years, as they would have rotted away long before they could be fossilized. What it does prove however is the fact that they were buried in these layers very rapidly.

Apologist Tim Chaffey writes, an "obvious example, which tourists can visit around the world, is rock layers that were deposited around the globe at the same time. This is consistent with the Genesis account of a worldwide, versus a regional, catastrophe. For example, the Tapeats Sandstone, which sits on the basement rocks of Grand Canyon (Arizona), also appears far away in Wisconsin and across the ocean in Israel and Libya (under different names). How could a local flood deposit the same rock layer across multiple continents? The Canyon also contains multiple flat layers that are sitting on top of each other without any evidence of erosion in between. Secular scientists believe these were deposited millions of years apart, and in fact, other deposits were laid in the interim in other places. For example, the Coconino Sandstone sits directly on top of the Hermit Formation, but there is no indication of any layer deposited between these two layers (seen elsewhere). Supposedly five to ten million years passed before the Coconino Sandstone was deposited on top of the Hermit Formation without evidence of any erosion. The Coconino looks like it was in fact deposited immediately on top of the Hermit. Wouldn’t you call this evidence for a global Flood? Or how about this one? You can go to many places on the planet and see row upon row of consecutively deposited rock layers that were soft when deposited and then bent, sometimes drastically. The whole series shows no signs of fracturing. Obviously, hard rocks do not bend without breaking. A better explanation is that the Flood laid these layers rapidly, and they were bent before they could dry out and harden."2

The global nature of Noah's Flood, the uniform characteristics of the geological and fossil records, all point to the accuracy of the biblical account and to a young earth. As you can see, there is plenty of room in the scientific record for accepting the biblical account and not permitting yourself to be bullied into acceptance or silence in the face of the challenges of Atheistic Naturalism.

2. A Flood of Evidence: https://answersingenesis.org/the-flood/flood-evidence/