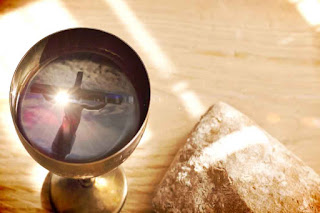 I recently was made aware of a small group of Christians, of a wide variety of denominational backgrounds, who refuse to partake of the Eucharist due to perceived abuses in whatever church bodies they were associated with. For them, the apparent justification is the desire to not do so in an unworthy manner or in union with those who perhaps fall short of the behavior of an orthodox or sincere Christian. Is this a legitimate position for a disciple of Jesus Christ to hold? If not, why? In John 13:6-10, Jesus required the apostles to allow Him to wash their feet. Peter refused, since he didn't view himself worthy that his Master should wash his feet. Jesus gives him a gentle rebuke by telling him that, if he doesn't allow Jesus to do this, then Peter has no part of Him. Peter immediately relents, as indeed he should. One of the lessons here is this: what Jesus commands of us, we do. To refuse means we have no part of Him. In short, we're not His disciples. A refusal meets with the words of Jesus in Luke 6:46.

At the institution of the Lord's Supper (Eucharist), Jesus said, "..do this in remembrance of me." Jesus didn't give this sacrament for His own benefit, but for the believers. It is both a means of grace and, in the apostle Paul's words, "you solemnly proclaim the death of the Lord, until He shall come." (1 Corinthians 11:26) Announcing His death is a very public witness of several things:
A disciple cannot refuse communion on the grounds stated at the outset of this article. An abuse of a thing doesn't negate the proper use of that thing. If a church has done something to abuse others or blaspheme the Lord, or does not properly and reverently observe the Eucharist, then the disciple's responsibility is to find a church that does! A disciple cannot refuse to observe the Eucharist, since it was imposed on us by command of Christ Himself, and he made no provision for a protest movement. There is nothing in the gospel that says, "Do this in remembrance of me...unless a church messes it up and you decide nobody can observe it ever again." The absurdity of the position should be obvious. If one refuses to receive communion then he/she is not doing what the Lord told them, and logically has no part of Him. In short, they've ceased to be a disciple. Refusing to receive this sacrament at the hands of heretics is honorable, and no one can find fault with that, but this in no way absolves us of the responsibility to carry out the commands of our Savior.
Labels: Communion Eucharist J. Davila-Ashcraft Lord's Supper paleoorthodoxy