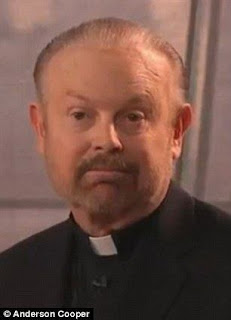 Some of my readers know that I am familiar with Bob Larson to a degree that perhaps most of his critics are not. I became acquainted with Larson in the late 1980s via his then radio program Talk Back with Bob Larson, broadcast nationwide and internationally. I not only guest hosted his program, but appeared in a video project he produced, spoke at his Save Our Kids From Satanism seminar, and worked periodically behind the scenes in the ministry offices. I got to know a few of the people there pretty well, foremost among them being Margo Hamilton, then Director of Listener Services, who was indeed a sincere and caring Christian. The program was well known for dealing with subjects most Christian broadcasts avoided, including cults, the occult, Black Metal music, Satanism, and Skinheads. Larson was branded by some the shock jock of Christian talk, and not undeservedly. He never avoided the most bizarre of callers, engaging them in lengthy discussions on everything from sacrificing animals to how much they hated him and wanted him dead (always through a curse or some occult method). Just as infamous as his content, Larson's fund raising never failed to raise eyebrows, except among the most trusting of Christian men and women who sincerely felt their financial support was saving the lives of those who came to Christ and needed to escape whatever horrible situation they found themselves in as a result of their occult activity or the like. Critics charged him with preying on people's sense of moral responsibility, while actually doing little substantive to help. Others flat out charged him with being a fraud, literally lying about his faith and any claims to helping those who came to him. Eventually the word got out that Larson was raking in the cash to support an extravagant personal lifestyle, and while divorcing his wife of many years in favor of his then secretary, his ministry imploded and the radio program vanished from the air. There is much more to the tale, but interested readers can look that up on their own. Suffice it to say there is much in Larson's career to make one wary.

Fast forward to our current year: Recently Larson appeared on an episode of Expedition Unknown, hosted by Josh Gates, because Larson has been engaged in a somewhat new "ministry"- that of exorcism. Renting hotel space to hold what can only be called a traveling demon show, dressing up in prietsly clericals (No, he's not a priest and was ordained via mail order), hawking his wares in the form of books, videos, and his online courses through the self-styled "School of Exorcism", where you- yes you- can become a certified exorcist...for a pretty hefty fee. These hotel room circuses have nothing in common with legitimate exorcism ministry. Here's just a sample:

How can I be so certain this isn't real exorcism? Briefly, shortly after my ordination I was appointed the exorcist for our eparchy, and was mentored by a Roman Catholic Franciscan priest/exorcist. During that mentorship I was introduced to the theology and methodology of Christian exorcism. Years later I wrote a book on the topic for the general public in an effort to educate others so they wouldn't fall prey to hucksters and con-men. That said, a few of the most simple "rules" of exorcism ministry are:

1. You don't publicize people's names who need exorcism.
2. You never use them in television programs or video projects for personal promotion.
3. You absolutely NEVER charge for exorcism intervention.

As you might have guessed, Larson does all of the above. His YouTube channel says the following under the video titled "Schedule a private encounter with Bob Larson, the Real Exorcist":

"In just one hour you can the life you’ve always wanted. Bob Larson will help you overcome the obstacles holding back your spiritual destiny. Stop the cycles of failure, poverty and sickness. Break family curses at the root! Discover the cause of destructive habits and addictions. Get rid of demons. Uncover hindering issues. Be healed of infirmities. No pastor, priest, or counselor has dealt with more spiritually bound people and seen them set free. This isn’t counseling. This isn’t therapy. This is intervention to get answers NOW! Your lifetime of suffering will end. Your torment will stop. The job you need, the relationships you desire will finally be within your reach. The choice is simple–stay stuck or move on to spiritual fulfillment and success in every area of life. Get free, stay free, and live free! Need help right where you are? Is your house haunted? Are you unable to travel? Bob makes house calls. If you can’t get to Bob, he will get to you."

Quite a lot to promise considering not even Jesus promised those things after his exorcisms. I guess Bob perfected something Jesus was an amateur at. (Yes, that's sarcasm.)

Does Larson do this free of charge? As you might have guessed, the answer is no. His website reveals that, for a personal encounter at his Center for Spiritual Freedom, the cost is $495 per hour, any other location will cost you $595, plus gas, hotel, air flight, car rental, etc.

Don't want to travel to Arizona for your encounter with Larson? No problem! He can do his exorcisms via Skype- for $395 for 50 minutes.

Still too much to pay? Perhaps you could settle for Larson's phone exorcism, for a meager $250 for 50 minutes.

Getting the picture yet?

Larson isn't a "real exorcist", and his tactics have led to some doubting he's even a real Christian. My opinion? I've thought hard about this over the years, and part of me, despite knowing all of Larson's indiscretions and bad theology and methodology, wanted to give him the benefit of the doubt with regard to faith.After all, judging a man's heart is not something I can do. Then again, knowing Larson as I do, I know him to be intelligent, calculating, and shrewd. He's not naive in any sense. I have to judge Larson on what we know and what we see. This leads me to suspect that he's not a sincere believer at all, but simply found an easy way to support himself in the lifestyle he has been accustomed to. I invite you to watch the following video and decide for yourself. Is Larson an exorcist, or an opportunist?