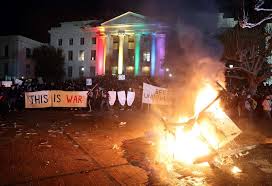 African American scholar Leonard Jeffries claims that whites are biologically inferior to blacks….Adopting an evolutionary perspective, Jeffries told his class that whites suffer from an inadequate supply of melanin, making them unable to function as effectively as other groups. One reason that whites have perpetuated so many crimes and atrocities, Jeffries argues, is that the Ice Age caused the deformation of white genes, while blacks were enhanced by “the value system of the sun.”