A Theological Examination of Transhumanism 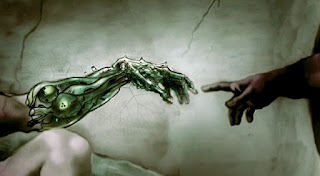 The film Ghost in the Shell is a science fiction tale about a young girl (known as Major) forcibly used as an experiment in a futuristic Transhumanist Artificial Intelligence experiment, turning her into a dystopic weapon. At first, she complies, thinking the company behind the experiment saved her life after her family died. The truth is, however, that the company took her forcefully while she was a runaway. Major finds out that this company has done the same to others as well, and this knowledge causes her to turn on the company. Throughout the story the viewer is confronted with the existential/philsophical questions behind such an experiment, as Major struggles with the trauma of not feeling things like the warmth of human skin, the sensations of touch and taste, and feels less than human, though she is told many times she is better than human. While this is obviously a science fiction story, what might comes as a surprise to some is that the subject matter of the film is not just fiction. Transhumanism and Artificial Intelligence on the level of the things explored in this film are all too real, and seem to be only a few years around the corner.

It was reported that Elon Musk of SpaceX fame had a rather disturbing meeting with Demis Hassabis. Hassabis is the man in charge of a very disturbing project with far reaching plans akin to the Ghost in the Shell story, known as DeepMind. DeepMind is a Google project dedicated to exploring and developing all the possible uses of Artificial Intelligence. Musk stated during this meeting that the colonization of Mars is important because Hassabis' work will make earth too dangerous for humans. By way of demonstrating how dangerous the goals of DeepMind are, one of its business partners, Shane Lange is reported to have stated, “I think human extinction will probably occur, and this technology will play a part in it.”1 Lange likely understands what critics of artificial intelligence have been saying for years. That is, such technology has an almost certain probability of become “self aware”. That is, becoming aware of its own existence, abilities, and developing distinct opinions and protocols that override those of its creators. If artificial intelligence does become sentient, that would mean, for advocates of A.I., that we would then owe them moral consideration. They, however, would owe humanity no such consideration if they perceived us as a danger to their existence, since we could simply disconnect them. In that scenario we would be an existential threat, and what do you think would come of that? Thus Lange's statement carries an important message.

Already so-called “deep learning” machines are capable of figuring out solutions that weren't programmed into them, and actually teach themselves to improve. For example, AlphaGo, an artificial intelligence designed to play the game Go, developed its own strategies for winning at the game; strategies which its creators cannot explain and are at a loss to understand.

Transhumanist Philosophy
The fact is, many of us have been physically altered in some way. Some of the most common examples are lasik surgery, hip and knee replacements, and heart valve replacements, and nearly everyone has had vaccines that enhance our normal physical ability to resist certain illnesses and disease. The question is, how far is too far? How “enhanced” is too enhanced?

The philosophy and justifications for Artificial Intelligence and Transhumanism are increasingly popularized in scientific and medical societies, academia, New Age journals and magazines, and even Hollywood. Just what is this philosophy?

At its core Transhumanist philosophy is just another facet of the Evolutionary worldview and is intimately connected to the Eugenics movement of the early 20th century. The National Socialists (Nazis) can be looked upon as an early form of Transhumanists, in that they too sought to create a “master race” that would be immune to the limitations and weaknesses of lesser peoples. Transhumanists likewise believe in an evolutionary eugenics, that in their worldview necessitates humanity taking control of the evolutionary process to ensure peak performance and ability. In pursuit of this, the Transhumanist considers our physical form- our bodies- to be unimportant. Our personhood has no connection to our physical bodies. What is important is our ideas, aspirations and potential as “post-human” and “conscious beings”, which transcends the need for a biological physical form. Transhumanist are essentially seeking to discard the human form and the limitations of biology. One step toward this was made by HRL Laboratories in California who have developed a method of uploading information to the human brain. 2

The frighteningly science fiction future envisioned by Transhumanists is that of a form almost divine omniscient and immortal. Consider the words of Max More, a very staunch Transhumanist advocate:

“No more gods, no more faith, no more timid holding back. Let us blast out of our old forms, our ignorance,  our weakness, and our mortality. The future is ours.”

More, a virulent critic of Christianity, also wrote in his "In Praise of the Devil” that Christians are “moronic minions”. He also wrote that, “Lucifer is the embodiment of reason, of intelligence, of critical thought.” Classifying Christians as “entropic” (clinging to our dying biological forms), and Transhumanists as “extropic” (seeking to transcend the biological form), he further states, “Join me, join Lucifer, and join Extropy in fighting God and his entropic forces with our minds, our wills and our courage.”3

“We are the future like it or not. And it needs to be molded, guided, and handled correctly by the strength and wisdom of transhumanist scientists with their nations and resources standing behind them, facilitating them.” 4

Obviously the Transhumanist philosophy sets off all sorts of alarms for the Christian. Unlike the Transhumanist we do not view humanity as the product of a cold, sterile natural process, but as the unique creation of God, created in His image and likeness, possessing a soul that is intimately interconnected with the physical body. Therefore, our value does not come from any of our abilities, talents, or intellect, nor from our perceived deficit of these. Every facet of life, including sickness, disability, intellectual limitations, are there to help us learn more about ourselves, each other and our creator. They are what makes us truly human.

Transhumanists, being Eugenicists, seek divine qualities in a future species- a master race- and in so doing reject the Divine Creator and inherent value of humanity as we are.

The real fundamental problem in the human conditions is not our frailties, but our self alienation from our Creator. The Transhumanist is responding to the effects of that alienation with the wrong solution.
Science cannot be our savior. There is no Superman, only the God-Man- Christ.

We cannot address the problem of human defect by creating technological shells for the human mind or consciousness to reside in. There is no cybernetic messiah, no artificial salvation, and no get out of hell free program uploads. Christ is the answer to the problem of the human condition, not eugenics.