Occultism In Your Neighborhood 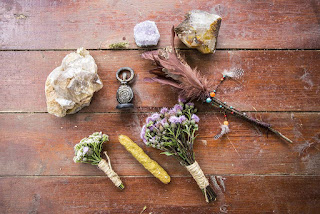 What comes to mind when you think of the occult? Perhaps it is black robed and hooded evil minions, chanting in some strange language, in an attempt to invoke Satan. Or maybe you have a mental picture of a group of teens gathered around a Ouija board, hoping to make contact with a dead relative. Whatever comes to mind, it usually never occurs to us that occultism may indeed be right in our own neighborhood. And yet, in almost every major city in this country, you will absolutely find occult societies and groups.

The word "occult" is derived from the Latin occultus, which means to conceal, or hidden, secret things. In the context of occult societies practicing Satanism, Witchcraft, Ritual Magick, etc., when we use the word occult, we mean an attempt to gain knowledge of the spirit world, and/or power, by means of contact with the supposed spirits of the dead, pagan "deities", and ancestors. That is, biblically speaking, through communication with fallen angels- demons. The Book of Enoch, a non-canonical writing quoted in the New Testament, tells us the origin of much that we associate with occultism is found in those very same fallen angels themselves. We are told they taught humanity the use of charms, enchantments, mind altering drugs, astrology, and various means of foretelling the future by the various elements of nature- a classical pagan practice.

The early church was very aware of the origin of occultism.

"The demons were the inventors of astrology, soothsaying, divination...oracles, necromancy, the arts of magic, and whatever evil practices men exercise in addition to those things."- Lactantius

"Magic and sorcery derive their power from evil demons..."- Origen

"My child, do not be an observer of omens, for it leads the way to idolatry. Likewise, do not be an enchanter nor an astrologer."- Didache

All of these we find forbidden in Sacred Scripture.

"Let no one be found among you who sacrifices their son or daughter in the fire, who practices divination or sorcery, interprets omens, engages in witchcraft, or casts spells, or who is a medium or spiritist or consults the dead. Anyone who does these things is detestable to the Lord;"- Deuteronomy 18:10-12

Sorcery here is to be understood as the use of mind altering drugs. One cannot deny the pervasive problem of drug abuse in the West, and few have ever viewed it from the perspective of biblical data. Drug abuse is indeed a form of occult bondage. Also, the mention of witchcraft takes in the various forms of Wicca, and the mention of mediums and those who consult the dead covers those who claim to be psychics, some of whom are even used by law enforcement agencies. Yes, occultism is in every neighborhood.

Beyond this, it is likely that you will find Wiccan groups, neo-pagan groups, Spirit Channelers, New Age "meditation" groups, Edgar Cayce study groups, and maybe even outright Satanists operating in your neighborhood. I encourage Christians to do some research and discover whatever you can regarding the groups in your area and begin to pray for them. If possible, when they have public events, attend those events and share the Gospel in a firm, informed, and loving way. While the occult is truly sinister and evil, those attracted to occultism are people just like you and I. They are average people who are seeking something to give them answers. They are not necessarily sinister people. We need to respond to occultism and occultists with wisdom and love.

"Have no fear of them, nor be troubled, but in your hearts honor Christ the Lord as holy, always being prepared to make a defense to anyone who asks you for a reason for the hope that is in you; yet do it with gentleness and respect..."- 1 Peter 3:15