The Connection of Natural Law to Eternal Law 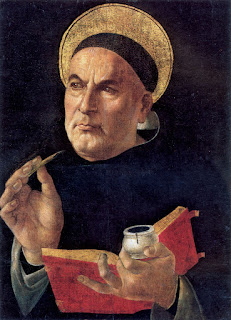 It is interesting that in our post-Modern culture, some actually deny the existence of Natural Law, looking upon the concept as a mere historical oddity. Some modern philosophers and political activists will go so far as to suggest that one is a hopeless antiquarian to even bring the topic up, and thus should be ignored. No substitute exists, however, for Natural Law as a fundamental basis for a rational ethical system. The result of divorcing culture from Natural Law is that much of modern political thought is rendered dangerously destructive and without merit. Politics, without Natural Law, finds its ultimate expression in oppressive States, such as the former Soviet Union, Cuba, and other Leftist and "revolutionary" governments. This is so because, without Natural Law, morality is undermined, as its traditional determinants are removed. This permits the State to determine morality and ethics apart from Natural Law, not to mention Divine Revelation. Any socio-political philosophy that denies Natural Law, must also reject the principle that the human personality is a distinct entity, created by God, with certain dignities and duties, destined for an eternity with the Creator, making oppression a logical outcome.

“Law is a rule and measure of acts, whereby man is induced to act, or is restrained from acting: for law is derived from “ligare”- to bind, because it binds one to act. ..Law is nothing else than an ordinance of reason for the common good, made by him who has care of the community, and promulgated.”

And regarding Natural Law, Aquinas defines it as,“...the rational creature's participation in the eternal law.”

Since, then, Natural Law is defined in terms of the Eternal Law, what is meant by Eternal Law?

Man cannot possibly know the Eternal Law in its totality because it is, essentially, the full mind of God. We can, however, know part of the Eternal Law through reason (Natural Law), and Divine Revelation (Sacred Scripture).

“Now God, by His wisdom, is the Creator of all things, in relation to which He stands as the artificer to the products of His art...Moreover He governs all the acts and movements that are to be found in each single creature...Wherefore as the type of the Divine Wisdom, inasmuch as by It all things are created, has the character of art, exemplar or idea; so the type of Divine Wisdom, as moving all things to their due end, bears the character of law. Accordingly the Eternal Law is nothing else than the type of Divine Wisdom, as directing all actions and movements...The whole community of the universe is governed by Divine Reason. Wherefore, the very idea of the government of things is God the Ruler of the universe, has the nature of law. And since the Divine Reason's conception of things is not subject to time, but is eternal...therefore it is that this kind of law must be called eternal. Every rational creature knows it (the Eternal Law), in its reflection, greater or less. For every knowledge of truth is a kind of reflection and participation of the Eternal Law which is unchangeable truth...Wherefore, since all things subject to Divine Providence are ruled and measured by the Eternal Law, it is evident that all things partake somewhat of the Eternal Law, in so far as, namely, from its being imprinted on them, they derive their respective inclinations to their proper acts and ends...Wherefore, it (the rational creature) has a share of the Eternal Reason, whereby it has a natural inclination to its proper act and end; and this participation of the Eternal Law in the rational creature is called the Natural Law.”

In other words, everything that exists- planets, stars, plants, animals, humanity- are a single kingdom under the governance of the Divine Lawgiver. Christ is King, because He is also Lord and God. But lordship is different than kingship, even in God. It is one thing to be lord and master, owner and proprietor of chattel, domain and property; it is another thing to be king, governor, lawgiver, and judge of political subjects. The former we can call the power of dominion, or of ownership, while the latter is power of jurisdiction. Power of dominion is for the good of the owner who wields it, while power of jurisdiction is for the good of the governed. As God is Lord of the universe, He directs all its operations to His own glory. As He is King, He governs as a King should govern, for the good of His subjects. In intellectual creatures, whose will is not set in opposition to God, the subject's good and the glory of the Lord coincide. God wills to bind His creatures to a certain line of action. Not arbitrary, but the natural lines of each creature's created being. The Eternal Law combines the laws of physical nature and the actions of physical causes, along with the moral law and human acts. It is the one primeval law of the universe, antecedent to all actual creation, and is as eternal as God. And yet, it is not as necessary as God, since if He had not decreed to create, He would have had no need to decree Eternal Law, contingent as its is upon creation and the decree that every creature should act in the mode of action proper to its kind.

We may define Eternal Law, then, as God's directive power over all things in existence, so that every created things moves, acts, and exists according to the nature that God has created in it. Man alone of all creatures in the world, is able to comprehend, through his reason, a part of the Eternal Law, which, as applicable to humanity, is the Natural Law. This Natural Law is essentially ethical and applies only to the acts of Man. Man's physical nature operates according to laws. Time produces changes in the human body, regardless of the thoughts or actions of the individual.
Labels: Aquinas Church and State Divine Revelation Eternal Law government Natural Law paleo-orthodoxy