The Relationship of Apologetics to Theology 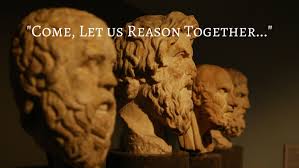 The word “apologetic” is derived from the Greek word “απολογητική”, meaning “defense”. Thus the expression “Christian Apologetics” refers to the defense of the Christian faith.

An apologetic examination of scientific challenges may confine itself to the setting forth of the rational grounds which are the bases of Christian truth- such as the witness of reason to the existence of God, the nature of humanity, and the relationship of humanity to its Creator, concluding with a defense of Divine Revelation. In the development of such an apologetic an opportunity is given whereby the assured conclusions of the various sciences which deal with the origin of humanity and the history of the cosmos receives intense attention. This is the most common form of apologetics as is evidenced in the voluminous works of Dr. William Lane Craig.

However, an apologetic which proposes for its specific object the defense of Revelation proper continues to make use of reason, but reason informed by faith as its main instrument, which presupposes the truths of “natural religion” already established, and proceeds to the detailed philosophical exposition of the nature, possibility, necessity, and comprehensible nature of Divine Revelation as set forth in Sacred Scripture. Thus the formal object and aim of any Christian Apologetics is the philosophical defense of Divine Revelation. The relationship of apologetics to theology is as follows:

The subject matter of theology- that is, its formal object- is God as supernaturally revealed, and as the point of apologetics is to defend all that has been supernaturally revealed, it is clear that apologetics forms a fundamental part of theology. Christian Apologetics is a rational defense of theological truth. This defense is made by reason under the direction of faith. Not that the apologist uses faith to enforce reason, or reason to establish faith, but he chooses under the direction of faith the special rational arguments put forth to defend Revelation, and develops their inquiring force wholly by means of the light of reason. As the fact of Revelation is not immediately obvious to us in our fallen and finite condition, we need the establishment of its truths because of their intrinsic value, and because of the eternal nature of our assent to these truths. Heaven and Hell are the only two logical outcomes, depending on one's response to the truths of theology and the reason behind apologetics.
Labels: Apologetics Christian theology paleo-orthodoxy relationship of apologetics to theology Systematic Theology