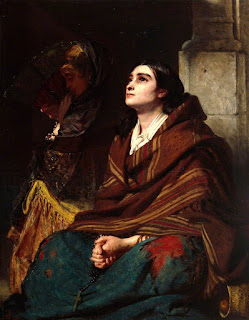 The virtue of faith is a supernatural virtue whereby we believe truths revealed by God, and believe them on the authority of God revealing. It is to this "evidence" that Paul alludes when he describes faith as the "substance of things hoped for, the evidence of things unseen." (Hebrews 11:1) We believe, not because of the intrinsic truth of things seen by the natural light of reason, but because of the Divine authority which guarantees their truth. An act of faith is a supernatural assent of the intellect, most certain and free, whereby we believe a truth revealed by God on His Divine authority. This means it is:
The object which is believed is either material or formal. The material object is the totality of revelation. It is divided into the object of faith per se, which cannot be known without revelation, and the preambles of faith. The object of faith per se is either formal or primary. i.e. intimate life of God, or other truths of revelation.

1. His truthfulness;
2. His infallible knowledge.

Intellectual assent is a judgment which may be doubtful, probable, or certain.
Since the intellect believes at the command of the will, the act of belief is free, because the object believed is not evident, and the motive is only one which influences the will to move the intellect to assent reasonably and firmly.

The virtue of faith must be supernatural and infused. Since the object to be believed (God and his intimate life) is essentially supernatural, the intellect of the believer must be proportioned to this object by a power essentially supernatural; belief must be infused by God and not acquired by humanity; and this is true not only for the faith of one in a state of grace, but for the faith of the sinner as well (preveient grace being operative).
Labels: Apologetics faith nature of faith object of faith paleo-orthodoxy revelation source of faith