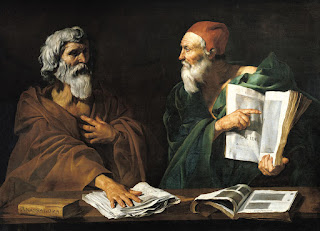 It should be quite clear that knowledge of supernatural truth is impossible unless a foundation of natural truth exists. Hence, the necessity, at the outset of any statement on supernatural truth, to establish the truth that primary notions and primary principles of human reason have:

1. an objective (ontological) value,
2. and, a transcendental value


A direct proof of an intuitive truth is not possible. When the connection between subject and predicate is immediate there is no place for a middle term. Everyone has an intuitive perception that the Law of Non-Contradiction is not only a logical law of reason, but an ontological law of reality. It is likewise immediately evident that an absurdity, such as a square circle, not only cannot be conceived of, but is also not possible. Equally immediate is the evidence of the truth that a contingent universe postulates a necessary cause.

But if the direct proof of the ontological value of primary notions and principles of reason is not possible, a direct defense based on the explanation of the terms enables the mind to see the evidential character of the intuition.

A. Direct Defense
Major: Primary ideas and principles of reason which do not express objects per se sensible, but objects sensible per accidens and intelligible per se, and resolvable into intelligible being have a value not only phenomenal, but ontological.

Minor: The primary notions of being, essence, existence, unity, truth, goodness, substance causality, finality, and correlative principles do not express objects per se sensible, like color, sound and other phenomena, but objects sensible per accidens and intelligible per se resolvable into intelligible being.

Conclusion: Therefore, primary notions and their correlative principles have a value not only phenomenal, but ontological.

Explanation of the Minor: The primary notions and their correlative principles intelligible per se and sensible only per accidens are resolvable into being. Unity is individual being, truth is being conformable to the intelligence on which it depends, goodness is desirable being, substance is a form of being, causality is the realization of being, finality is the ultimate purpose of being, etc. The intellect does not apprehend or judge anything unless in relation to being. In every judgment the essential relation is indicated by the word "is", which imports "being". Hence a judgment is not an association merely of names, but an association of things.

Should someone object that the idea of being is a subjective form of the understanding, the difference may be pointed out between the idea of being and ideas which express purely subjective notions (conceived but not capable of realization) such as notions of universality, specificity, whiteness, etc. Or the objection may be met by contrasting the ontological form of the Law of Non-Contradiction: "it is impossible that the same thing should exist and not exist", with the logical form of the same principle being, "it is impossible to affirm and deny the same predicate of the same subject in the same relation". The second form expresses only the inconceivable character of the absurd, the first form expresses its real impossibility. To reduce the notion of being to a subjective form of the mind,  and the Law of Non-Contradiction to a logical law and not an ontological law is to identify two notions manifestly distinct- the impossible and the inconceivable. If the Law of Non-Contradiction is only a logical law, then a square circle is inconceivable, but may exist in rerum natura.