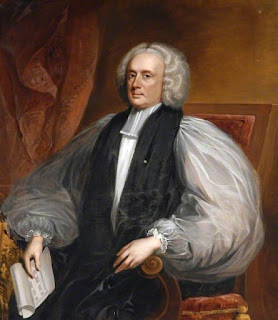 Bishop Joseph Butler (May 18, 1692-June 16, 1752) was an Anglican theologian, philosopher and apologist who is most known for his opposition to Deism, as well as his minor controversy with John Wesley and the young Methodist Movement. Butler's philosophy and theology had a strong influence on other great thinkers, such as David Hume and John Henry Newman. After entering the academy at Gloucester he was baptized in the Anglican Church, and in 1714 went on to attend seminary at Oriel College, Oxford. He received a Bachelor of Arts degree in 1718, and was ordained a deacon by Bishop William Talbot, Bishop of Salesbury, in the episcopal palace chapel in October of the same year. In December of 1718, he was ordained a priest by the same bishop at Saint James' Church, in Piccadilly. In 1736 he became the head chaplain for King George II's wife, Caroline of Ansbach. Subsequently he was nominated for Bishop of Bristol and consecrated on December 3, 1738 in the chapel of Lambeth palace. Butler's most famous writing is his Analogy of Religion, Natural and Revealed, a deeply philosophical and quite effective refutation of Deism. Butler was also known as a great moral theologian. One expert on Butler's theology and philosophy, Stephen Darwall, wrote that:

“Probably no figure had a greater impact on nineteenth century British moral philosophy than Butler.”

Butler's role in Methodist history is easy for Methodosts to dismiss in a fit of Wesleyan indignation, but he isn't a man to be so easily dismissed. After all, his concerns were valid, whether Methodists like that fact or not. His input wasn't just some petty argument by a stiff churchman, but was important to avoiding potential heresy, which often arises out of movements that place emphasis on experiential religion as did the Methodist movement. After meeting John Wesley and becoming familiar with the emotional outbursts of some in the early Methodist movement (which Butler referred to as “fits”), Bishop Butler rightly condemned “the pretending to extraordinary revelations and gifts of the Holy Spirit”, referring to such antics as “a horrid thing- a very horrid thing!” This led Butler to ask Wesley to leave the area, since he viewed the emotionalism attendant to the young Methodist movement to be, at the very least, near heretical.

As an Anglican priest, and someone who can appreciate some of Wesley's thought, I feel I can offer a critique of Butler's position that those raised in these circles cannot. Butler's concern was for theological orthodoxy as well as the integrity of the worship of God. Those given to so-called “charismata” tend to be anything but dignified, and quite often reject the historical modes of worship, and just as often fall into heresy due to “pretended revelations and gifts of the Holy Spirit.” This fact is evidenced in the many tragic sects and strange practices that have developed in the modern Charismatic movement. We find such oddities as: teaching that unless someone speaks in tongues they are not truly saved, “holy laughter”, faith healing, the “little gods” heresy, gnostic dualism, holy dancing, “slain” in the Spirit, and even claims of special revelations bringing forth new doctrines or secret and lost teachings now restored in this current dispensation.

“It is a sad twist of irony that those who claim to be most focused on the Holy Spirit are in actuality the ones doing the most to abuse, grieve, insult, misrepresent, quench, and dishonor Him. How do they do it? By attributing to Him words He did not say, deeds He did not do, phenomena He did not produce, and experiences that have nothing to do with Him. They boldly plaster His name on that which is not His work.”

Indeed, I agree with MacArthur as he writes:

“The sad fact is that biblical truth has never been the hallmark of the Charismatic Movement, where spiritual experience is continually elevated above sound doctrine.”

While it may not be the popular opinion in Methodist circles with regard to the conflict between Wesley and Butler, I find Butler's critique to have been fair, biblical and quite understandable. And given what we know today of such extraordinary manifestations of charismatic gifts, such as glossolalia, Butler's warnings and concerns were quite correct and quite nearly prophetic.
Labels: Anglican Church Bishop Joseph Butler Charismatics John Wesley Methodism paleo-orthodoxy