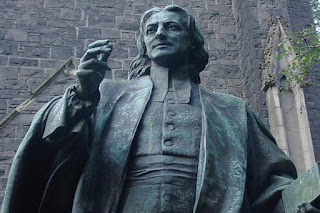 What is most valuable in the Wesleyan Anglican heritage (and here I speak specifically of the Conservative Holiness branch of the Wesleyan family) is the emphasis on personal holiness. We live in a time where the church has abdicated its role as the moral compass of culture, and in fact has embraced the moral uncertainty and relativism of the increasingly hostile forces of the world that control the direction of public thought.

Wesley's clear expectation of those in the Methodist movement was that, above all, they be a holy people, obedient to God's expressed will, and truly be salt and light. Unfortunately, the United Methodist Church is not upholding this primary principle taught by Wesley, nor is the greater body of Christianity. Instead we find the standard line is, 'I'm just a saved sinner.' This is simply an excuse in the face of their reluctance to actually pursue a holy life.

Spurgeon here echoes the clarion voice of Wesley who taught the same with regard to God's provision for the truly converted.

We find much talk in Christian circles of holiness, but very little of its pursuit. For example, Roman Catholicism places great emphasis on holiness, but does not substantively demand it of its members, providing for them a “get out of hell free” card as it were through the sacrament of confession. I am certainly not against confession, nor absolution in our Lord's name. However, when someone abuses such a privilege by confessing the same sin routinely, we know there is a deeper problem here and perhaps not enough emphasis on personal holiness as a necessity of Christian spiritual life.

Beyond this, Wesley emphasized social holiness, which is another way of expressing the social Kingship of Christ.

“The Gospel of Christ knows no religion, but social; no holiness but social holiness.”
- John Wesley

This is the Christian Faith lived out: the manifestation of Christ's revelation in the social order. It is a shadow of the future coming Kingdom of God. Thus, social holiness penetrates every facet of Christian life- economic, cultural, social- creating a community of faith that is constantly infused with a sense of the Sacred and of God's continual presence. In a simplistic sense, it is the community of believers who seek to live publicly according to the dictates of the Gospel of Jesus Christ to their best ability and to its fullest. Wesley clearly understood that the key to temporal pleasure was not in indulging the flesh, amusing the lusts of the mind and the senses, but of loving God so much that our happiness is found in holiness of life.

“As the more holy we are upon earth, the more happy we must be.”- John Wesley

The element of social holiness is one which the churches of Modernity have forgotten, either due to compromise with worldly social or political forces, or to capitulation to the conventions of the world itself. The Wesleyan heritage of holiness is of absolute importance to our world. We can see around us every day the effects of a rejection of the social Kingship of Christ. It manifests as moral relativism, religious indifference, Atheistic Naturalism, Cultural Marxism, and Libertarianism. The Christian community in the West has compromised with ideologies at odds with a healthy organic culture, and consequently, the West has succumbed to the disease of Modernity. The only way a culture in such desperate throes as ours is ever made well again is by taking the antidote-social holiness. Only the Kingship of Christ can reverse the destruction we see happening on a daily basis, and the essential element of social holiness will only be available if we preserve, live and share this most precious of gifts from the 1st century church in our daily lives, and show the world the present and future Kingdom of God in miniature form.
Labels: J. Davila-Ashcraft John Wesley Methodism paleo-orthodoxy social holiness social kingship of Christ