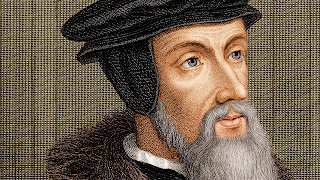 Over the past several years I have had the unfortunate occasion to deal with Calvinists who, despite the historical facts, seek to cast John Calvin as a saint, rather than allow the historical facts to speak for themselves. I have even been accused of being ignorant of the Reformation for even daring to suggest that Calvin was anything but a saint. While I understand some evangelicals want to believe the Reformers were pristine, we have to face the fact that they were all just men, with all the defects of inherited depravity. This includes John Calvin. By way of addressing the historical revision of Calvinist apologists, I will briefly detail the other side of Calvin and allow my readers to decide for themselves what the verdict on his behavior shall be.
At the age of 26, when most are still just forming an understanding of the most basic Biblical concepts, John Calvin, who had very little by the way of theological formation (only three years), published his magnum opus, The Institutes of Christian Religion. The book explores every facet of theology and reveals Calvin’s personal opinions on everything from God to morality. One of the most obvious problems with the book is that it reveals that in Calvin’s mind, not only had both the Orthodox and Roman churches been completely wrong on every single detail of theology, but only he with three years of study, truly understood the vastness of Christian theology; a vastness which apparently the whole world missed- except for John Calvin. It is generally safe to assume that if someone claims to have restored something to the church that literally no one outside the apostles knew, you are on very tenuous ground. And his claims, both theological and of his own wisdom, drew criticism. And Calvin had many lovely names for those with whom he disagreed. Names like fool, crazy, frenetic, sophists, drunk, mad, sacrilegious, sycophants, wild beasts, pigs, and atheists. Not exactly charitable language to use on other Christians, but then, John was not known by his contemporaries for his charity. He had such a notoriously bad reputation that even Rousseau many years later wrote of him:
“Who was ever more caustic, more imperious, strong willed, and divinely infallible, according to his own opinion, than Calvin? For him, the least opposition, the least objection that someone dared to present was always considered a work of Satan, a crime deserving to be punished by fire.”
Indeed, Calvin was not someone given to charity when it came to theological dissent. For example, his hatred for Johann Maier von Eck, a Catholic priest, was so vile that when Eck fell gravely ill and was forced to convalesce in Geneva, Calvin wrote, “One says that Eck will recover. The world still does not deserve to be delivered of this wild beast!” Calvin’s Christian compassion for a brother in Christ is underwhelming. Not that Eck was any saint, mind you. He fully embraced resorting to force to deal with heretics, and in temperament was not very different from Calvin. Is this an excuse for Calvin wishing the man dead, though? You tell me. Once Calvin gained political power and influence in Geneva (1546-1564), he enacted laws that imposed horrible penalties on those who dared to return to the Catholic Church. In fact, he also managed to enact laws that fined the citizens for not attending his sermons and refuting any of his doctrines, or even insulting his person.
J. B. Galiffe, a Protestant historian of Geneva, wrote of Calvin’s tyrannical behavior:

For years people were obliged to report in minute detail every word spoken against him and the doctrine of predestination, with which he identified himself to such a degree that to speak against the dogma became as dangerous as to speak against him. The poor were dragged to prisons, scourged, reviled, obliged to walk in the streets barefoot wearing a penitential habit and carry a torch to expiate for what Calvin arbitrarily called ‘blasphemies.’

Some other examples of Calvin’s behavior are:
Galiffe, who diligently researched the records of that time, goes on to tell us just how excessive were the crimes committed by “this tyrant priest who submitted Geneva to the most infamous servitude”. For example, the number of judgments by public tribunals normally made in one year in Geneva “was easily surpassed in a single month or even a week under the rule of Calvin. Often there were many of these spectacles in a day.” He reports that during Calvin’s violent grip on Geneva, the following are directly attributed to his direct influence, “One counts thirty executions of men and twenty-eight of women, subdivided by method of death. 13 persons hanged, 10 beheaded, 55 quartered, 35 burned alive after being tortured.”
Historian Jean Tet adds to this his own research, revealing that “from 1542 to 1546, which was the softer period of his government, we count 58 capital executions, 76 banishments, and 900 imprisonments.” One would think these were reports of the Grand Inquisitor of Rome, rather than the Protestant Reformer seeking to restore the church to its pure form. So I leave it to my readers to decide. Do the facts of history demonstrate that John Calvin was a saint or a tyrant? Whatever my readers decide, we must deal with history, even our own history, honestly- warts and all.
Labels: Calvinism Christian theology J. Davila-Ashcraft John Calvin paleo-orthodoxy tyrant