The Modernist and Marxist Infiltration of the Vatican 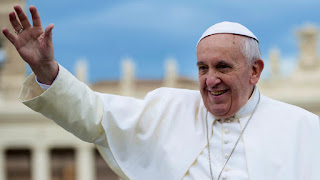 “Now the Spirit expressly says that in later times some will depart from the faith by devoting themselves to deceitful spirits and teachings of demons...”
- 1 Timothy 4:1


It was an average day at the hospital. She was a nurse at the local hospital and led your normal 1960s French life. She went about her daily routine at the hospital, checking on patients in her ward, chatting with those who needed cheering up, and administering medications. However, this night would be unlike any other she had ever experienced.

One of her patients, a Slavic looking man who had been seriously injured in an auto accident, was assigned to her ward for care. His case looked bad and he was not expected to live. She dutifully attempted to communicate with the man, who simply laid in his bed, eyes open, staring into space. He either could not, or would not respond.

“Can you blink your eyes for me? We can use one blink for yes, and two for no. Can you do that for me?”, she asked. He simply laid there staring.

“I noticed we don't have a name listed for him. Do we have identification?”, she asked the head nurse.

“No. Oddly enough he had no identification at all on him.”, the head nurse responded. “All he had was that briefcase under his bed with a story in it, but no name. Weird, if you ask me.”

The young nurse sat in the chair next to his bed, pulled out the briefcase and began reading the manuscript. It did not read like a story, but an autobiography. As she scanned the pages she discovered that this mystery patient was not at all your average, run-of-the-mill accident victim, and this was more than an autobiography. It was a confession. He was an undercover agent for the Soviet Union, ordered to infiltrate the Catholic Church by entering seminary and becoming a priest. Everything had been prepared in advance for him. Other operatives already occupied positions of authority in the seminaries, dioceses, and even the Vatican itself, and they would facilitate his infiltration. According to the document, the ultimate goal was to undermine whatever biblical orthodoxy there was in the Church and push for a council that would revolutionize the entirety of Catholicism by introducing Marxist principles under the guise of faithful Catholic dogma. Anyone who got in the way of this goal was expendable, and indeed the manuscript revealed this mystery patient had murdered a priest who discovered the plot.

The patient died a few hours later, and no one claimed his belongings or even came forward to name him.

This may seem like something from the Da Vinci Code, but it is not. It is an account of a very real experience. The nurse, Marie Curre, hesitantly came forward with both the manuscript and her story in 1972, fearful for her life. She died in 1984.

What she revealed in publishing the manuscript has been denounced by Roman Catholic apologists as an invention of her own, a dark fantasy written to bring the Catholic Church into disrepute. The fact is, however, that the influential figures behind the Second Vatican Council, ostensibly the council engineered by the Marxist cabal of the manuscript, did indeed make religious dogma of what was clearly Cultural Marxist ideology. The Vatican promoted Modernism in all its forms; theological, philosophical, scientific, and artistic. Where once it had defended the sovereignty of nations, it now openly promoted Globalism, and joined arm in arm with the United Nations and Council on Foreign Relations.

“(The manuscript) may be an invention of Marie Curre, but one must admit she hits the bull's eye from the first page to the last....How surprising indeed that all her so-called inventions have become reality in the post-conciliar church.”

Indeed, when we consider the current pope, Francis I, Curre's story becomes more plausible than ever. Francis is clearly not a Christian in any orthodox biblical or historical sense. He blatantly promotes Cultural Marxism using Christian language. This is one of the things that perplexed me about the accolades he receives from many evangelicals. For some reason they find in his faux humility (he is quite well known for his despotic rule by Vatican insiders), his ecumenism, and his grandfatherly persona endeared him to evangelicals around the world. And yet his theology, such as it is, denies every doctrine of the orthodox Christian faith.

Leonard Boff, a radical Marxist living in Argentina who knows Francis I, stated of Francis' extreme liberalism during a 2012 interview:

“For example, a few months ago he explicitly permitted a homosexual couple to adopt a child.”

And most of us are also aware of his comments that atheists will be saved, his advice to not bother with protesting abortion, or that Catholics need to have fewer children, and his comments to fellow Jesuit, Rev. Michael Rogers that studying fundamental biblical theology is “one of the most boring things on earth.”

If this sort of claptrap were confined to Francis I, one could brush it off as an anomaly. Such is not the case, however. Similar Leftist ideas have been promoted by all of the popes of recent memory; John XXIII, Paul VI, John Paul I, John Paul II, and Benedict XVI.

Marie Curre, whether her story was true or not, pointed out a very real problem with the Catholic Church and the Vatican. It has indeed been infiltrated by Cultural Marxists, and the principles of that Leftist ideology have been defined as dogma since the Second Vatican Council. The Catholic Church then is problematic not just on a spiritual level, but on the social, political and cultural levels as well. It promotes the “teachings of demons”, and we must warn others, lest they be partakers of her sins.
Labels: Cultural Marxism Francis I heresy Modernism paleo-orthodoxy papacy Roman Catholic Church The Vatican