The American Revolution: A Violation of Romans 13? 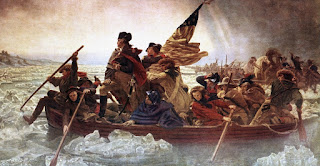 Mr. Fischer offers as justification for the American Revolution the list of grievances in the Declaration, which include a “long train of usurpations”, “oppressions”, and a general tyrannical rule by the King. Interestingly, most who take the position Fischer advocates would also argue that the secession of the Confederate States of America was a moral evil, or at the least a violation of some unknown sacred principle. Never mind the fact that the Confederacy could just as legitimately claim many of the same things claimed in the Declaration, somehow that mini “revolution” was immoral. Some invoke the slavery argument (and "natural law") as to why the Confederacy had to be destroyed. While slavery is a horrible blight on human history in general, you can find no admonition in Scripture to engage in a war to end the practice. In fact, in God's permissive will, knowing Man would indeed engage in the practice, the Lord provides very strict guidelines for the treatment of slaves (Exodus 21); guidelines which are not amended in the New Testament. If “natural law” were a legitimate reason for rebellion, then slavery would certainly fall into the category of things Christians would encourage rebellion against. Yet, the Apostle Paul does exactly the opposite. In the Epistle to Philemon he sends a runaway slave back to his master, requesting his freedom rather than praising Onesimus for his rebellion. I want to be clear, this is not to suggest that slavery is a just practice. It is not. It is, I believe, immoral, and it is for that reason that God provided such strict rules governing it- to protect the slave from abuse. What the Apostle's actions demonstrate is that even in the most oppressive of conditions such as slavery, scripture does not encourage revolution against the natural, organic government.

Fischer also gives us the example of the Northern Kingdom of Israel to support what can only be called secession, though he draws a false equivalency to revolution. Without arguing that minutiae, we will conceded for the sake of argument that this is an example of revolution. What Fischer does not address is the basis upon which that revolution occurred. That is, the Northern Kingdom had the direct and clear intervention of God and His Word guiding them at the outset. Can the American Revolution claim the same? In order to answer this question we have to examine the philosophical principles that formed the inspiration for what became the United States.

First, whether one wishes to face the facts of history or not, the majority of those who fomented the American Revolution were not informed by Sacred Scripture, but by the philosophers of the Enlightenment. The Enlightenment, which most historians place between the years of 1715 and 1789, was not at all based on biblical principles, but rather on the humanistic principles and ideals of reductionism and the doubting of biblical orthodoxy, summed up in the popular enlightenment phrase Sapere aude- “Dare to know”. These principles, which included outright attacks on Christianity, were spread in the scientific academies and, not surprisingly, the Masonic Lodges. In fact, the modern Marxists, Democrats, and Republicans alike legitimately trace their common intellectual origin to the Enlightenment.

Perhaps the two most influential thinkers for the movement are Voltaire and Jean Jacques Rousseau. By way of demonstrating just how antithetical this movement was to Christianity I think it prudent to provide direct quotes from these thinkers.

“Christianity is the most ridiculous, the most absurd and bloody religion that has ever infected the world.”- Voltaire

“Every sensible man, every honest man, must hold the Christian sect in horror.”- Voltaire

“But I am mistaken in speaking of a Christian republic; the terms are mutually exclusive. Christianity preaches only servitude and dependence.”- Rousseau

While Fischer does not express the idea himself, many of those who share his position on the American Revolution and founding of this nation will forcefully argue that the United States was founded as a Christian nation. Nothing could be further from the truth. There is not now, nor has there ever been a "Christian nation" anywhere on earth. The First Amendment clearly proves this idea to be erroneous in prohibiting the establishment of a religion. And John Leland, one of the influential Colonial leaders stated, “The notion of a Christian commonwealth should be exploded forever.” This is no isolated sentiment. If we examine direct quotes from the Founders we find they rejected completely the idea of the United States as a Christian nation.

“The government of the United States of America is not, in any sense, founded on the Christian religion.”- John Adams, 1797

“We have abundant reason to rejoice that in this land the light of truth and reason triumphed over the power of bigotry and superstition.”- George Washington, 1793

“The United States of America have exhibited, perhaps, the first example of governments erected on the simple principles of nature; and if men are now sufficiently enlightened to disabuse themselves of artifice, imposture, hypocrisy, and superstition, they will consider this event as an era in their history. Although the detail of the formation of the American governments is at present little known or regarded either in Europe or in America, it may hereafter become an object of curiosity. It will never be pretended that any persons employed in that service had interviews with the gods, or were in any degree under the influence of Heaven, more than those at work upon ships or houses, or laboring in merchandise or agriculture; it will forever be acknowledged that these governments were contrived merely by the use of reason and the senses. - John Adams, 1787

“Knowledge and liberty are so prevalent in this country, that I do not believe that the United States would ever be disposed to establish one religious sect...”- Elbridge Gerry, Annals of Congress

We could go on and on with quotes from the various Founders refuting the idea of the United States as a Christian nation, but this should suffice to prove this point.

Consider the following as well:
Rev. Bird Wilson, son of Founding Father James Wilson, responding to the historical revision attempting to paint the Founders as orthodox Christians, wrote in 1831:

“The founders of our nation were nearly all infidels, and that of the presidents who have been thus far elected (Washington, Adams, Jefferson, Madison, Monroe, J.Q. Adams, and Andrew Jackson) not a one had professed a belief in Christianity.”

We are not dealing here with second hand information, since Wilson personally knew Washington and many of the other Founders, having grown up in their presence. He went on to write:

“Among all our presidents from Washington downward, not one professed religion, at least not more than Unitarianism.”

What all this demonstrates is that, unlike the Northern Kingdom of Israel, the American Revolution was not in any way founded upon God's Word or guidance, but from the philosophical foundation of humanism, liberalism, and religious indifferentism, thus rendering the comparison a fallacy.

The inevitable results of the philosophy advocated by the Founding Fathers and enshrined in the founding documents of the United States can be, first, seen in their application in the French Revolution. I mention this revolution because it too was informed by the very same principles, and took its inspiration directly from the American Revolution. Whereas the church had been tax exempt, under the new regime of “liberte, fraternite, egalite”, the church now had that exempt status removed. The French Revolution saw the persecution and murder of priests and religious, the rape of nuns, the confiscation of churches, and the establishment of the Cult of Reason and Robespierre's Deistic Cult of the Supreme Being as a replacements for Christianity. Churches and cathedrals were confiscated and turned into temples for these cults, complete with the erection of idols, such as in the Cathedral of Strasbourg. The morality of the populace saw a dramatic decline, and chaos ensued with competing political factions vying for control at the expense of the people and of traditional values and morals the society had derived from the Christian faith. The parallels with the United States today should be obvious. While the French arrived at this point much quicker than the United States has, we are now very near where they were. Christians are persecuted for such things as not baking a cake for a gay wedding, those of Western European ethnicity are blamed and castigated for every social, political, and economic difficulty the minorities experience, outright Marxists rioting and looting, our history attacked. Churches are empty as a result of, among other things, government schools promoting the religion of Atheistic Naturalism, and the philosophical principles of rationalism, relativism and Scientism. The morals and values of this nation are dead, and we suffer under a two party system forming a false Left vs. Right dichotomy, each vying for absolute power while certain segments of the populace suffer. We are experiencing the inevitable and natural results of the principles of the Enlightenment as enshrined in this democratic republic.

Nowhere in Scripture can one find any justification for overthrowing any government- period. Not even for taxation without representation. Such an idea as political revolution was as foreign to the thinking and theology of the early church as can possibly be.

So when John MacArthur says that any blessings this nation receives are bestowed by God despite our rebellious founding, both spiritual and temporal, he is correct. This nation's founding violates not just Romans 13, but violently contradicts God's Word in its totality.
Labels: American Revolution Christianity and government J. Davila-Ashcraft paleo-orthodoxy Romans 13