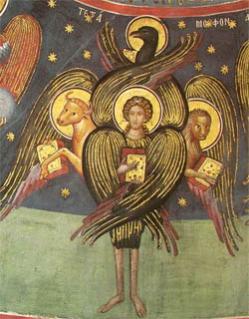 No discussion of spiritual warfare would be at all complete or comprehensible were we to leave out a discussion of angels. After all, what we know as demons are in actuality fallen angels. Also, the holy angels help us in ways we perhaps do not even realize, as Sacred Scripture tells us. The word angel comes from the Greek angelos, and that from the Hebrew malakh, both meaning messenger. Angels are ministering spirits sent by God to do His will.

"Are not all angels ministering spirits sent to serve those who will inherit salvation?"- Hebrews 1:14


"Let us consider the whole multitude of His angels how they stand ready to minister to His will."- Clement of Rome


Angels are also created beings, which means they, like us, are limited in power, ability, etc.

Specific Types of Angels
There are at least two specific types of angels mentioned in scripture.


Cherubim- First mentioned in Genesis 3:24. They are also depicted on the Ark of the Covenant (Exodus 25:18-22). Ezekiel mentions these angels, and a far cry away from the cute little babies with wings we see in popular artistic depictions, they are anything but cute. He describes them as having four faces; the face of a lion, the face of an ox, the face of a man, and the face of an eagle.


Most Prominent Angels
There are two angels who are mentioned by name and feature prominently in Sacred Scripture.

Micahel- Michael the archangel is mentioned by name in Daniel 10:13, 21; 12:1; Jude 9; and Revelation 12:7. He is the only angel referred to as an archangel. He is represented as having charge over an army of angels in Revelation 12:7, and is said to be thr prince of the people of Israel in the Book of Daniel.

"The great and glorious angel Michael is he who has authority over this people, and governs them."- The Shepherd of Hermas

Gabriel- The meaning of his name is "mighty one". He is mentioned in Daniel 8:16; 9:21; and Luke 1:19, 26. He is always charged with the delivery of important messages from God. It is Gabriel who interpreted the vision of Daniel in Daniel 8:16 and 9:21, and is the angel who announced the births of both John the Baptist and Jesus.