An Exegetical Examination Of Ephesians 3:14-21 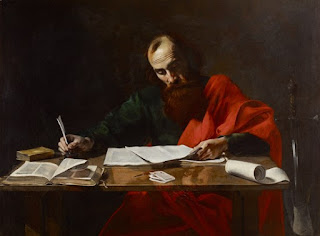 “For this reason I kneel before the Father, from whom every family in heaven and on earth derives its name. I pray that out of his glorious riches he may strengthen you with power through his Spirit in your inner being, so that Christ may dwell in your hearts through faith. And I pray that you, being rooted and established in love, may have power, together with all the Lord’s holy people, to grasp how wide and long and high and deep is the love of Christ, and to know this love that surpasses knowledge— that you may be filled to the measure of all the fullness of God. Now to him who is able to do immeasurably more than all we ask or imagine, according to his power that is at work within us, to him be glory in the church and in Christ Jesus throughout all generations, for ever and ever! Amen.” -Ephesians 3:14-21

The main idea of this passage is found in Paul praying that God will empower the believers he is writing to, and help them develop a deeper awareness of divine love.

A. Paul gives his reasoning for the following prayer, which is touched upon in the previous verses. (“For this reason” vs. 14)


2. Paul prays that they might have power and love. (“I pray that out of his glorious riches he may strengthen you with power through his Spirit in your inner being, so that Christ may dwell in your hearts through faith. And I pray that you, being rooted and established in love”, vs. 1517)


B. Paul prays that the Ephesians might have more knowledge of his power and love.


2. That they would have a deeper experience of the love of Christ in their lives. (“may have power, together with all the Lord’s holy people, to grasp how wide and long and high and deep is the love of Christ, and to know this love that surpasses knowledge..” vs. 18-19)


C. Summarizes the prayer (“that you may be filled to the measure of all the fullness of God.” vs. 19)


1. References God's omnipotence. (“Now to him who is able to do immeasurably more than all we ask or imagine, according to his power that is at work within us,” vs. 20)


2. Praises God. (“to him be glory in the church and in Christ Jesus throughout all generations, for ever and ever! Amen.” vs. 21)

Ephesus was a port city in what is now modern day Turkey. It was a very important trade center and was quite important religiously. It boasted a temple for the worship of the pagan goddess Artemis. Quite often sexual immorality was sacramentalized in pagan religions, requiring adherents to indulge in temple prostitution, etc. This of course would lend itself to a misunderstanding of love among the new Christian of Ephesus. Being a port city Ephesus also included various racial groups, including Hellenized Jews and Gentiles, both groups members of the church at Ephesus. The church at Ephesus was actually founded by the Apostle John, who traveled there with Mary the mother of Jesus. The Ephesians Church consisted of both Jew and Gentile.

During John's exile to the Isle of Patmos, Paul visited Ephesus to continue teaching the new converts the fundamentals of the Christian faith, while Apollos went to Corinth (Acts 19:1). Paul spent approximately three and a half years in Ephesus teaching the disciples. He found himself facing the various pagan religious elements in Ephesus and had some difficulty with local pagan government officials. The church began to grow popularity in Ephesus. The conversions of pagans to this new faith angered a jeweler named Demetrius (as well as others) who earned a living by selling and making silver statues of the goddess Artemis. Demetrius and the other pagans provoked thousands of people and met with them in the Ephesus theater and started shouting “Great is Artemis of the Ephesians!” Paul wanted to face the crowd but the Christians there would not allow him to do so. Finally, the city clerk announced that the courts were open for people who had a complaint and dispersed the crowd. After this event Paul left Ephesus and went to Macedonia.

In 95 A.D. John returned to Ephesus to lead the Ephesians church and likely wrote his gospel there. John died here and was buried not far from the ruins of Ephesus. Paul is writing in the Epistle to the Ephesians to this mixed church of Jew and Gentile. The context of the entirety of chapter 3 is the mystery God gave Paul. Namely that Gentiles are heirs with Jews.

IV. Content
1. Paul's reason for the prayer- (verse 14) Paul clearly has several reasons for this prayer. However, the previous verses add to our understanding of the intention behind it. Previously Paul states the need to remove any racial distinction or reason to be prideful or feel inferior. This is no doubt because of the mixture of Jew and Gentile that comprised the Ephesian church. Paul's desire was to impress upon the Christians there that God’s love is all encompassing. Thus Paul makes the statement that it is from God that “every family that is in heaven or on earth derives its name”. He is emphasizing the unity of humanity before God.

2. Paul prays that they might have power and love- Paul clearly wants the believers to be empowered divinely. (verses 15-17) Here he mentions love; agape love and perhaps even filial love, given the context of family and overcoming racial barriers.

3. Paul Summarizes the prayer- he stresses again and again this love, and this time the “fullness” of it. (verses 18-21) This same love that removes the barriers brings Jew and Gentile together not as the Chosen and those “tag along” Gentiles, but as one family in Christ, united in His love and the love of God.

V. Application
There are a few levels of application in these few verses. First, in order to properly demonstrate love we must be willing to humble ourselves before God and “kneel” before His majesty. Love of God is essential to really have love of our neighbor. Beyond this, we must be “rooted and established” in love through Christ, and not pay mere lip service to love as some vague concept. To be rooted and established in something means we are firmly and even unconsciously engaged in its execution in our daily lives. Our love of God must be demonstrated by our commitment to studying His Word, daily devotions, and prayer. Extending from this, love of our neighbor manifests as seeking their highest good, even as Christ sought ours. This means we share the gospel, and do good works of mercy and kindness as a witness of our love. Finally, to grasp how wide and deep the love of Christ is we must look beyond our petty prejudices and view people from God's perspective. There is only one race- the human race. Every single one of us is equal before God and Christ died for everyone of every skin tone and national origin. Paul is very clear that there is absolutely no place for racial prejudice in the Body of Christ. In order for the church to move in divine power (a reliance on God's provision and guidance), it must also move in divine love, which breaks down barriers and shatters petty prejudices.