A Brief Look At Astral Travel 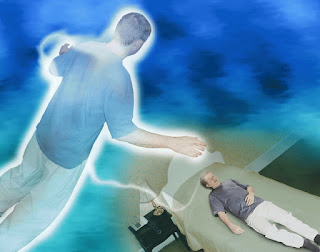 One of the more common features of New Age spirituality is that of astral travel, or astral projection. The term astral travel is used by New Age occultists to describe the usually willful projection of the spirit outside the body. In other words, an out of body experience. Most New Age teachers will tell you that in addition to your physical body you possess an astral body, with which you can travel to the spiritual world in and encounter everyone and everything from dead relatives to mythological deities to faeries and angels. The idea of astral travel is rooted in occultism and heavily promoted by the Theosophical Society. It is not uncommon to find a New Age adherent claiming such travel even during dreams and meditation. Those who would seek to defend this belief against the orthodox Christian view will usually point to Paul's 2nd Epistle to the Corinthians.

"I know a man in Christ who fourteen years ago was caught up to the third heaven- whether in the body or out of the body I don't know, God knows."- 2 Corinthians 12:2

Is astral travel Biblical? Are we able to travel out of our bodies at will?

Before we examine the claims made regarding Paul's statement we should perhaps understand a bit more of what happens during these so-called astral travels. Many people claim to meet spiritual figures such as Buddha, Confucius and even Jesus. In every case where someone claims to meet an entity claiming to be Jesus the person is told things that are antithetical to the known historic teachings of Jesus as recorded in the Gospels. For example, this false Jesus will support belief in reincarnation, a "Christ consciousness", and spiritual relativism- all religions are true. This of course completely contradicts the historic documents recording for us the teachings of Jesus known as the Gospels. But that is not all.

Some people, like New Age teacher Erin Pavlina, claim to experience sexual experiences while out of the body. I warn my readers that what follows may be shocking, and I have done my due diligence in only quoting Pavlina enough to demonstrate a spiritual danger inherent to astral travel. If you are easily offended please leave now.

Still here? Okay, you have been warned.

Pavlina states in her article Astral Sex: The Ecstasy of Out of Body Pleasure:

She goes on to reveal the following:

" You can also have sex with a demon or low vibrational entity."

Yes, you read that right; sex with a demon. She then explains that one can be sexually assaulted during such an astral travel episode:

"These entities can come to you against your will and essentially rape you. If you’ve ever been stuck in a sleep paralysis state and felt someone touching you in your special areas, and got aroused even though you were terrified, you’re basically being astrally raped.”

Such activity is nothing short of blasphemous and hardly rises to the lofty spiritual claims made for the practice.

Another woman apparently involved in New Age occultism shared her experience of "astral rape". Her story is as follows:

"Here is the background for my story. (it starts off pleasant) About 6 months ago, I met my spirit guide who told me his name was Aaron. I had such a crazy attraction to him, and just thinking about him at any point in time now, I will get intense butterflies in my stomach and feel like I am in love. I felt this intense desire though, anytime he was near me. The feelings were so strong however, that one day I "gave in" and I won't go into detail, but basically whenever our chakras would touch, it felt like I was having the most intense orgasm of my life. The end of our session ended with a huge "boom" and everything went totally bright white. I had a headache afterwords for about 3 days- right in the center of my forehead. When I told my husband about the experience, he was less than thrilled. Due to the problem it was causing between us, I told my husband I wouldn't "see" Aaron anymore.

I hadn't sought out Aaron since then, after feeling kind of guilty like maybe I was "cheating" in a way on my husband. (sounds weird I know) Well today after "getting out" for a while, I was entering my body and just kind of laying there enjoying the intense vibrations I was feeling. For some reason when I return or before I exit, I have a huge desire for sex. (think maybe because of my root chakra being fully opened) So, I called out for Aaron, and I thought it was him. (yeah I know, I shouldn't have) Before whenever I would see Aaron, there was a huge light. This time it was all dark, which should've been an indication....but I ignored it at the time.


So it was pleasurable at first. It felt like it started in my base chakra, and whatever was touching me was working its way up. Sometimes it felt like the energy could be directed wherever I wanted it to go....my throat, up to my forehead. I'm not sure when it happened, but all of the sudden it felt like there was an energy change in the room. Aaron, or whatever had been with me originally was gone, and now I could sense at least 3 or more entities. They were standing by me, looking down and discussing what to do to me. One of them said, "let's take her back with us". I got a "flash" of what one looked like, and it WAS NOT pleasant at all. He had long stick legs- like as skinny as a broom, and a head of a ram, or something with horns. (kind of like that pan creature) The female entity he was talking to, had a lot of hate she was directing at me. I was kind of feeling uncomfortable at this point, and wanted to leave my body completely to have more control over the situation. It wasn't sleep paralysis- it was like my astral body was being held down!!! I could move my arms and legs, but I was being pinned down right in the solar plexus area. (I've experienced sleep paralysis, and this was very different because it wasn't my physical body being held down) Then all of the sudden, they started running at me from across the room, and darting down on top of me. It's like they were taking turns "taking energy"....I couldn't really do anything about it, physically or astrally. I was just kind of stuck. They talking was getting louder, and now I could hear music. It felt very obscene, and I didn't feel anything positive or warm coming from them."


So what should we take from these claimed experiences? If we take them at face value (and I do not suggest we should take all such claims as fact), what are these people describing? This is nothing more and nothing less than a form of communication with demons. In the world of spiritual warfare and exorcism it is not at all odd to hear claims of sexual abuse at the hands of the demonic, since demons seek to frighten and demoralize their intended victims. Note that the victims at first want such experiences, and actively seek them out. This is what we call demonic obsession. Then once the demon has been given access to the victims life the experience turns from one of perceived pleasure to that of violent imposition. Such abuse falls into the  category of demonic oppression. Astral Travel, being another form of demonic contact, can ultimately lead to demonic possession. So the verdict on Astral travel? No, it is not Biblical and it is not spiritually safe or condoned by God.

"When you enter the land the Lord your God is giving you, do not learn to imitate the detestable ways of the nations there. Let no on be found among you who sacrifices his son or daughter in the fire [human sacrifice], who practices divination [obtaining knowledge of the future through occult practices, i.e. psychics and channelers] or sorcery, interprets omens [signs of activity of pagan gods, i.e. palm readers, astrology], engages in witchcraft, or casts spells, or who is a medium or spiritist or who consults the dead [astral travel, séances and those who try to speak to the dead]. Anyone who does these things is detestable to the Lord, and because of these detestable practices the Lord your God will drive out those nations before you. You must be blameless before the Lord your God."- Deut. 18:9-13

Demons, not "Ascended Masters" or our dead relatives, or boyfriends/girlfriends, are the only spiritual entities other than the holy angels that roam the world around us. And they do so seeking our destruction. (Eph. 2:2; Eph. 6:12; 1 Peter 5:8).

"As I was saying, these contaminated and abandoned spirits wander over the whole earth. They console their own by destroying others. Therefore they fill every place with snares, deceits, frauds, and errors."- Lactantius

"Not knowing these spirits were demons, they called them "gods" (or indeed Ascended Masters, spirit guides, etc.).."- Justin Martyr

And that verse from Paul? Does that condone Astral Travel? Absolutely not. While scripture does indicate that we can be taken in dreams, in our spirit or physically to heaven, it is never at our own command, will or through any occult means. What Paul describes is merely an experience of a man whom Paul knew who was taken to the "third heaven"- again not through any occult method- but by the power of the Holy Spirit. This is akin to the apostle John's visions recorded in the Book of Revelation. Never make the mistake of ascribing to Satan that which the Holy Spirit does, since that is the unpardonable sin. The final verdict on Astral Travel must be that it is a grave sin and leads to demonic obsession, oppression and potentially even possession.
Labels: Apologetics Astral Projection Astral Travel Bible Christianity J. Davila-Ashcraft New Age New Age Movement paleo-orthodoxy